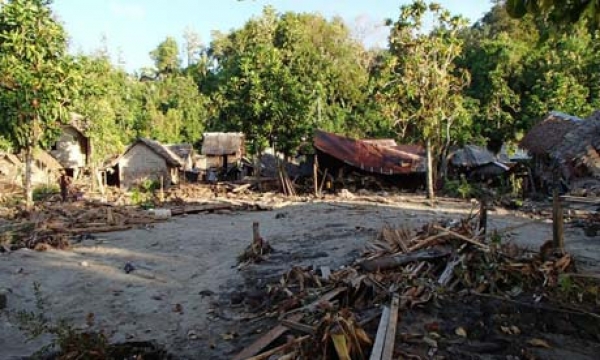 Aid workers struggled to reach remote villages in the Solomon Islands on Thursday as the death toll rose from a tsunami triggered by a powerful undersea earthquake.

At least nine people were killed when a powerful earthquake set off a small but powerful tsunami that sent 1.5-metre (4ft 11in) waves roaring inland on Santa Cruz Island, in the south Pacific, on Wednesday. Around 100 homes across five villages were damaged or destroyed.

“Elderly villagers and at least one child were among those who died after being sucked under the rushing water,” said George Herming, a spokesman for the prime minister. “Dozens of strong aftershocks were keeping frightened villagers from returning to the coast. People are still scared of going back to their homes because there’s nothing left, so they are residing in temporary shelters on higher ground.”

The tsunami was generated by a powerful 8.0-magnitude earthquake that struck near the town of Lata, on Santa Cruz in Temotu, the easternmost province in the Solomons. Temotu has a population of about 30,000. Underwater earthquakes create tsunamis from the shock created by the shifting tectonic plates. Smaller waves were recorded in Vanuatu and New Caledonia.

The damage appeared to be concentrated to the west side of Santa Cruz, with five villages wiped out, Herming said. Authorities were still struggling to reach the remote area but an estimated 100 homes had been damaged or destroyed, he said.

The tsunami flooded the nearest airstrip and left it littered with debris, preventing relief workers from reaching the region by air. Smaller islands may also have sustained some damage but workers had also not yet reached those areas, Herming said.

More than 50 people were killed and thousands lost their homes in April 2007 when a magnitude-8.1 quake hit the western Solomon Islands, sending waves crashing into coastal villages.

The Solomons comprise more than 200 islands with a population of about 552,000 people. They lie on the “Ring of Fire”, an arc of earthquake and volcanic zones that stretches around the Pacific Rim and where about 90% of the world’s quakes occur.