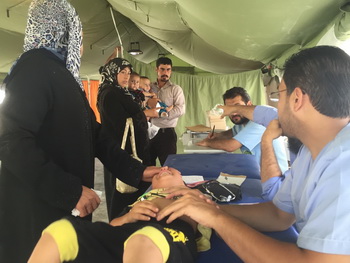 The exodus of millions of Syrians seeking refugee status in Europe and elsewhere is indicative of a major catastrophe inside Syria. Gift of the Givers medical teams have been a witness to the pain, suffering, extensive injuries and deaths of thousands of people. Their response was to set up an emergency hospital in Darkoush in January 2013 within 70 days.

Here is more news from them…

The popularity of the hospital grew rapidly necessitating an expansion both of the ground floor and an addition of two more floors. This expansion required the provision of more specialized equipment, increasing the medical personnel complement and procuring huge quantities of medicines and disposable medical supplies at huge cost.

The hospital faced further challenges; as more and more hospitals, health care centers and ambulances were deliberately targeted by Assad’s regime the influx of casualties multiplied in the Gift of the Givers Ar Rahmah Hospital. This hospital has become the largest and possibly only effective functioning hospital in all North Syria.

The hospital was under constant threat of attack since inception in January, but 2015 has been specially harrowing with bombs extensively destroying large parts of Darkoush city with the hospital suffering destruction of doors and windows. On more than one occasion the equipment, medical personnel and patients had to be evacuated to safer undisclosed locations. 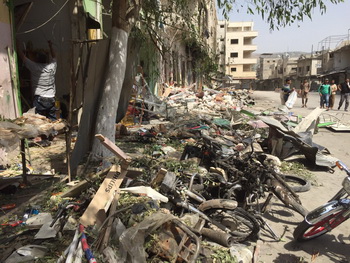 The increased threat of attack, the influx of refugees from other parts of Syria and the patient overload demanded a further significant intervention. The Turkish Red Crescent deployed and donated an outstanding field hospital to Gift of the Givers. This new hospital opened this week and is much closer to the Turkish border for security purpose. There has been an influx of patients already.

This hospital will be managed by Dr Ahmad Ghandour, their medical manager from the Darkoush Hospital.  180 member medical and support staff will service both facilities. There will be a need to increase the medical personnel and provide more medicines and disposable supplies. 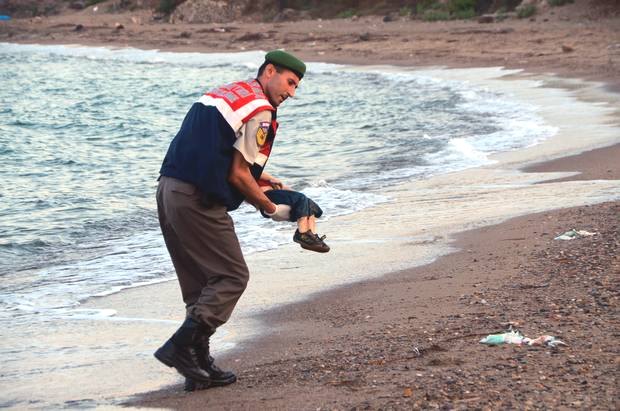 A paramilitary police officer carries the lifeless body of a child from a beach in Bodrum, Turkey, after a number of refugees died when boats carrying them to the Greek island of Kos capsized. Wednesday, Sept. 2, 2015. (AP Photo/DHA)

The heartbreaking picture of the Syrian child on the beach has whipped up emotions worldwide. Thank you to all for your compassionate response. The reality is that this tragedy has been unfolding since March 2011 and ever increasing in intensity to the present.

The greatest tragedy however, is INSIDE Syria, not only because of the millions of internally displaced civilians but because of the horrific crimes committed against them in various forms. These include detention, torture, cutting off the supply of food, water, medical services, medicines, the deliberate bombing of hospitals and the specific targeting of medical personnel.

The use of barrel bombs, vacuum bombs, chemical weapons, missiles and attack by aircraft on predominantly civilian populations has resulted in a death toll reaching 300 000 and casualties of immeasurable proportions.

Gift of the Givers response from 2013 has been concentrated almost exclusively inside Syria. To this date the policy still remains the same. The three floor Ar Rahma Hospital that we have established and manage with a compliment of 180 medical specialists and support staff is a living witness to the humanitarian crimes inside Syria. This South African Gift of the Givers hospital has been subjected to repeated attacks by the Assad regime, fortunately, till now, it has avoided major damage. On two occasions we had to evacuate equipment, medical personnel and patients. Two months ago we received 1700 casualties in 10 days. We have seen injuries through all kinds of weapons mentioned above including chemical weapons. We include some pictures which we regard as “mild” compared to what we have in our possession. We could not impose the horror of those pictures on the general public.

Life saving medical support, provision of food, shelter, food, milk powder, shelter, clothing, blankets, generalized feeding through a permanent kitchen and education through our involvement in schooling are our continuous efforts inside Syria. 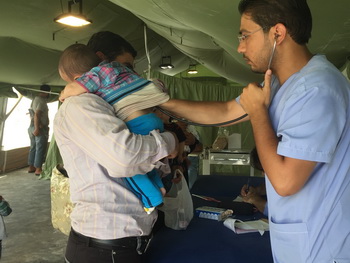 Contributions to Gift of the Givers, Standard Bank, Pietermaritzburg, Account No. 052278611, Branch Code 057525, are most welcome in the interest of serving the suffering Syrian people.

We value your contributions as it is only through your generous contributions that our medical teams have had the resources and medical supplies to save countless lives and physically heal close to 300 000 patients thus far.

Our special thanks to Angela Merkel and the people of Germany for their enthusiastic and compassionate welcome of traumatized refugees. Thanks to all other individuals and governments whose assistance may not be publicly known. The Almighty sees and rewards. Our South African efforts continue. 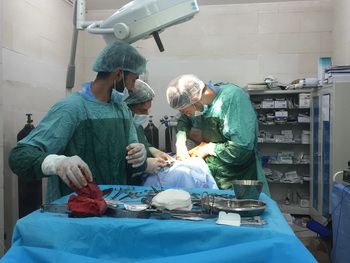