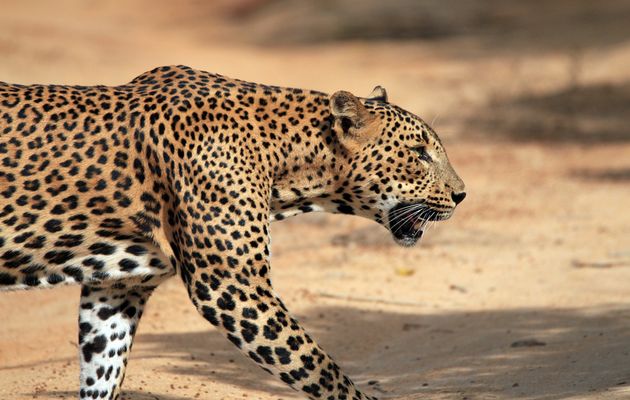 CapeNature would like to tell their side of the story published recently on the leopard who lost his life after being caught in a gin trap:

On Saturday 4 June, CapeNature conservation services investigated an incident where a leopard was caught in a gin trap that was set illegally. The cooperative landowner, who alerted the SAPS and CapeNature, provided as much information as possible to assist in the case.

When officials arrived at the scene the leopard was trapped in thick vegetation and could only be reached via foot. CapeNature, accompanied by the SAPS and a veterinarian arrived on the scene and attempted to dart the leopard in order to check the extent of the injuries and treat these injuries and hopefully secure the release of the leopard back into the wild, which is always CapeNature’s primary objective in such incidences.

Wounded leopard is aggressive and unpredictable

These types of operations are by nature extremely dangerous to the individuals involved as a wounded leopard is aggressive and unpredictable and there is little knowledge of how securely the animal is anchored by the trap.

During the operation on Saturday the leopard managed to break free from the anchor of the illegally set gin trap and attacked the veterinarian, who sustained injuries to their left arm. The CapeNature employee, who has extensive experience with these types of incidents, had to attempt to stop the animal from attacking, and intervened.

Unfortunately the SAPS and CapeNature had to shoot the leopard to end the attack on the veterinarian and to ensure that no further human lives were threatened. This incident was, thus, a case of self-defence where a human life was being threatened and the leopard’s death was tragically needed to save human lives.

CapeNature has laid a case with the Montagu SAPS against the labourer who set this illegal trap, as it led not only to the death of the leopard, but the injuries sustained by the vet, and the mental and emotional trauma suffered by the CapeNature staff member and SAPS member.

World Environment Day, with the theme of stopping illegal wildlife trade and poaching, is a reminder that the public plays a pivotal role in the conservation of the biodiversity of the Western Cape. The death of the leopard is a sad reminder of the senseless illegal acts that threaten this iconic species.

The use of gin traps, as used in this case, is illegal in the Western Cape without a special permit, and none have been issued to the public in a number of years. CapeNature does not support the use of such gin traps and condemns the illegal action which led to the loss of the leopard’s life. CapeNature will pursue further criminal prosecution in this matter.

We wish the veterinarian a speedy recovery and want to commend the fast and concise actions of our CapeNature staff member and the SAPS member that saved the veterinarian’s life.

The case is currently being investigated by the SAPS.