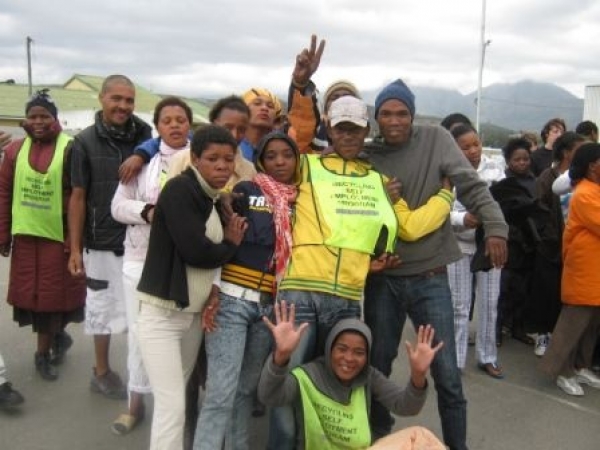 Sunday, 10-10-10 saw the biggest global Work Party for Earth ever to happen in human memory! Organised by 350.org more than 7000 groups of people in 180 countries got together and did something constructive. And if you think South Africans are asleep when it comes to green actions, think again. Across the country we rose to the occasion in a wide range of events in solidarity with the environmental cause.

In the Cape Town area even a very chilly wind could not prevent ardent greenies from doing their thing. In Observatory’s Ground-breaking Allotment Party local residents and those from surrounding suburbs chopped up a section of the disused tennis courts in Strubens Road to grow organic veggies and indigenous plants, organised by Project 90X2030.

This was followed by a veggie braai. A nature-minded art exhibition and sporadic and spontaneous performances and music was performed at the River Club Guerilla Art studio.

WESSA (Wildlife Society of SA) and CAP (Climate Action Partnership) planted inidigenous trees at Princessvlei. At Zandvlei, Muizenberg there was a planting picnic party, followed by a Mad Hatters Party in the evening. At Devil’s Peak water-guzzling bio-diversity destroying alien vegetation was hacked out.

In Fish Hoek a group of 20 learners, teachers and parents from Fish Hoek High School hiked up Orange Kloof and slept in the People’s Trail Hut on the top of Table Mountain. On 10/10/10 they woke up early and removed invasive alien blackwood saplings growing near the People’s Trail hut. 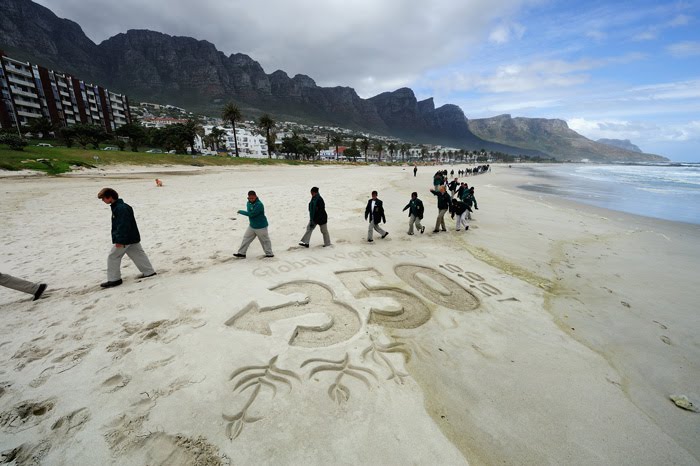 Outside Somerset West a public area of Lwandle was cleaned up by workers and office staff of WastePlan recycling company. They aim to help establish recycling collection in this area and assist in resolving serious waste problems.
In Darling greenies rocked at the Rocking the Daisies music festival with the motto ‘Play Hard, Tread Lightly.’ This is a premier music festival hosted in an environmentally and social responsible manner.

Then on to Johannesburg, where in Alexandra a solar water system was donated by NPO SESSA Solar Water, Intisolar & Unilever to the Sithandiwe Disability Centre for indigent, mentally disabled adults and children. Eco-savvy celebrity Elana Afrika did the hand-over.

At Kromdraai, Cradle of Humankind, cyclists did a 29 km loop to promote cycling and bike paths.

Then the Emmarentia Dam experienced the Rocking the Gardens Jozi Work Party, with 350.org in collaboration with Greenpeace. There was an info booth and climate awareness drive through video interviews with the public, as well as tree planting. 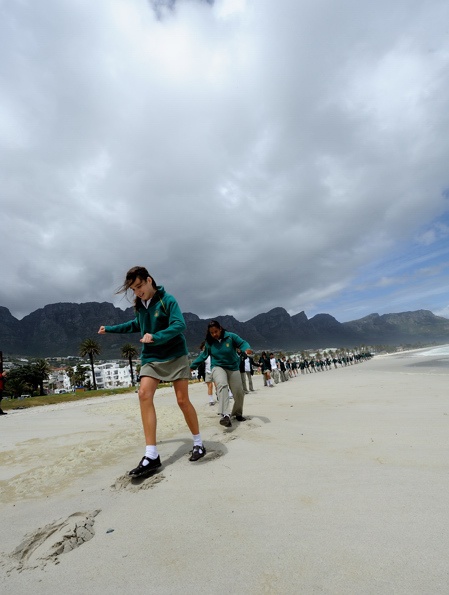 At Hartbeespoort a large water tank was donated and erected at the Meerhof school – and 9 more vouchers for water tanks handed over to other schools.

In Durban there was a cycle ride, river cleanup and enviro festival at the Green Hub.
After the worst drought in 60 years, 6 rural youth groups joined forces to kick climate’s butt at Vulamehlo and Buhlebezwa in Kwazulu Natal! They made letters and posters asking political leaders to implement local policies on climate change that will ensure people in rural areas are not left without water. And they learnt about the value of indigenous, drought-resistant food plants and the need to reintroduce these into their present diet. They planted seedlings in gardens at the local crÃ¨ches and community centre and take some home too.

In Howick in the Umgeni Valley Nature Reserve there was an event to celebrate climate change solutions with activities such as signing the Carbon Handprint Tunnel for posterity, solar cooked lunch, organic food stalls, picnic at the pines, nature walks, making zebra poop paper, competitions, tractor rides and planting of indigenous trees. 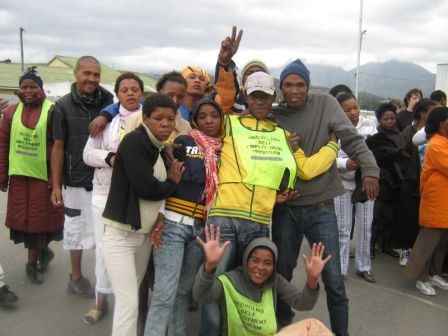 At Symmonds Stream people met to walk, cycle or ride on horseback along the Symmonds Stream and up to the top of Beacon Hill along the original wagon route (used by travellers from the coast to the Witwatersrand). On the top of Beacon Hill they collected illegally dumped litter and raised awareness of the importance of environmental resilience in the face of climate change.

In Richards Bay an awareness campaign at a local shopping mall used a stage, and a huge 350 stencil, where people could donate money for tree planting, and many corporates pledged and signed a petition to reduce energy usage. 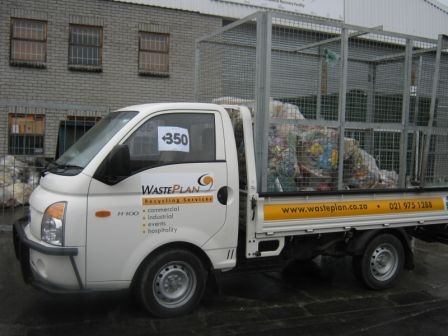 In the Eastern Cape at Zithulele, Wild Coast invasive aliens were cleared in a stream that leads into the Mncwasa River, in order to free up the water system that becomes a problem in the dryer winter months.

And at the Friendly City, Port Elizabeth, SAMREC released rehabilitated penguins back to the ocean. This was followed by the number 350 being sculpted into the sand while some people split up to do a beach clean-up. Recyclable waste collected on the day was collected by GreenCycle. The event was co-hosted by Nelson Mandela Bay Transition Network, South East African Climate Consortium (SEAC) Student Forum, and SAMREC (South African Marine Rehabilitation Centre).

Even during the week leading up to the event a whole host of other events took place, so here is a HUGE thumbs up to South Africa. Read more at www.350.org

If you did something magic that day that’s good for the earth, or any other day, send your news with pics to elma@thegreentimes.co.za.