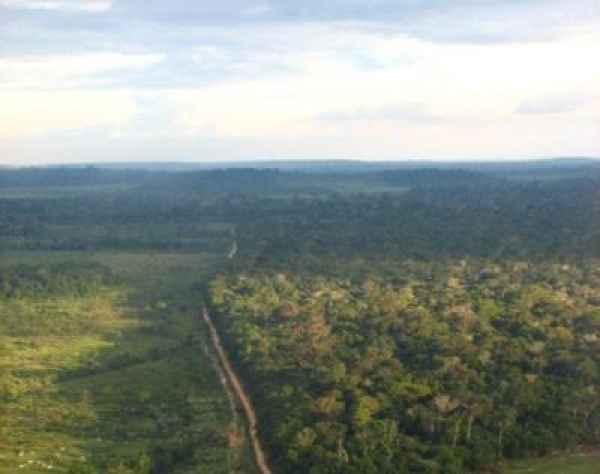 Deforestation as a result of GM soy plantations in the Brazilian Amazon. Image: Mauricio Araujo

On the day of the release of annual industry-sponsored figures, a new report from Friends of the Earth International reveals that claims made by the biotech industry that genetically modified (GM) crops can combat climate change are both exaggerated and premature.

The report, ‘Who Benefits from GM Crops?’, examines the evidence for these claims, and exposes that GM crops could actually increase carbon emissions while failing to feed the world. This is because, GM crops are responsible for huge increases in the use of pesticides in the US and South America, intensifying fossil fuel use. The cultivation of GM soy to feed factory farmed animals is also contributing to widespread deforestation in South America, causing massive climate emissions.

The report also exposes that globally GM crops remain confined to less than 3% of agricultural land and more than 99% are grown for animal feed and agrofuels, rather than food. There is still not a single commercial GM crop with increased yield, drought-tolerance, salt-tolerance, enhanced nutrition or other beneficial traits long promised by biotech companies.

Ongoing concerns about the negative impacts of GM crops means many Governments are still cautious about adopting them. India has placed a moratorium on the planting of its first GM food crop due to widespread concerns on its health, environmental and socio-economic impact. In Europe the area planted with GM crops has declined for the 5th consecutive year for the same reasons.

Millions are being spent by Governments on GM crops, and, promoted as a solution to climate change, they could be funded in the future through the UN climate emission reduction Clean Development Mechanism (CDM).

“GM crops are being promoted as a solution to feed us in a warming world, when in reality they are wiping out forests, damaging farmers’ livelihoods and increasing harmful emissions. Given the damaging track record of GM crops to date, and unfulfilled promises to feed the world, we would be well advised to disregard claims that GM crops can combat climate change.”

In South America, a cocktail of pesticides is being applied on GM soy, which is poisoning communities and contaminating the environment. GM crops, and the corporate control of seeds, are also hindering the development of real solutions by starving them of funding and restricting farmers’ access to seeds and knowledge. Genetically diverse, ecological farming and traditional knowledge have been identified key to facing future challenges.

“The reality is that GM farming is not a success story. Small farmers across the world are already using planet-friendly methods to feed themselves and cool the planet. These methods must be supported rather than environmentally and socially destructive GM farming.”