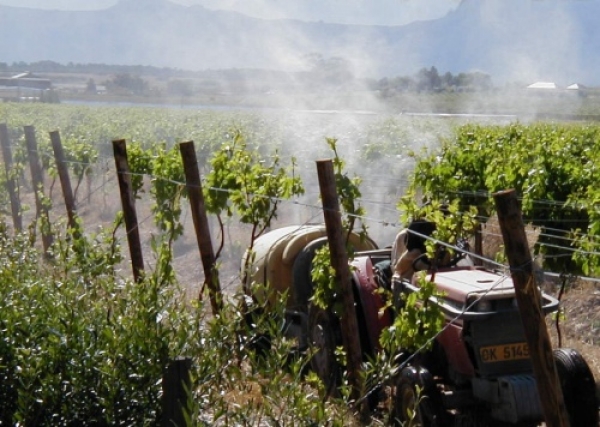 Poison sprayer hides as spray drifts over the fence into the neighbouring town.

In a special article for LAB, Claire Robinson, the editor of GM Watch, reports on efforts to silence a scientist whose investigations suggest that the widespread spraying of glyphosate, a herbicide widely used in GM soya farming, is doing serious harm to the health of the population.

The spraying of glyphosate herbicide on genetically modified (GM) Roundup Ready soya is coming under fire in Argentina from scientists and residents, who say it causes health problems and environmental damage. GM soya is genetically engineered to tolerate spraying with glyphosate, the most common formulation of which is Roundup. The Roundup Ready gene enables the farmer to spray the herbicide liberally onto the field, killing weeds but allowing the crop to grow on.

Argentina has become a giant experiment in the GM soya farming model. The Argentine government pulled the country out of an economic recession in the 1990s by restructuring the economy around GM soya. By 2009 the crop covered 19 million hectares, over half the country’s cultivated land area. This was sprayed with over 200 million litres of glyphosate. Spraying is often carried out from the air, increasing problems of drift.

As early as 2002, two years after the first big harvests of GM soya in the country, residents and doctors in soya producing areas began to report serious health effects from glyphosate spraying, including high rates of birth defects as well as infertility, stillbirths, miscarriages, and cancers. Environmental effects include killed food crops and livestock and streams strewn with dead fish.

Such reports gained scientific weight on the publication of a study by Argentine government scientist, Prof. Andres Carrasco, which found that glyphosate causes malformations in frog and chicken embryos at doses far lower than those used in agricultural spraying. Carrasco said, “The findings in the lab are compatible with malformations observed in humans exposed to glyphosate during pregnancy.” Commenting on the widespread belief that glyphosate is a safe herbicide, Carrasco said: “I suspect the toxicity classification of glyphosate is too low … in some cases this can be a powerful poison.”

Carrasco is director of the Laboratory of Molecular Embryology, University of Buenos Aires Medical School and lead researcher of the National Council of Scientific and Technical Research (CONICET), Argentina. His distinguished career has not protected him from attacks by defenders of agrochemicals in government and industry. After he announced his findings in 2009, he said four people from Argentina’s crop protection trade association CASAFE were sent to try to search his laboratory and he was “seriously told off” by Argentina’s science and technology minister.

Carrasco said, “In spite of the evidence, they still tried to run down my 30-year reputation as a scientist. They are hypocrites, lackeys of the big corporations, but they are afraid. They know they can’t cover up the sun with one hand. There is scientific proof and, above all, there are hundreds of affected towns which are living proof of this public health emergency.”

Hostility to Carrasco’s findings took a violent turn when an organized mob attacked people who gathered to hear the scientist speak in the agricultural town of La Leonesa. Three people were seriously injured. Carrasco and a colleague shut themselves in a car and were surrounded by people making violent threats and beating the car for two hours. Witnesses said the attack was organized by local officials and a local rice producer to protect economic interests behind local agro-industry. Amnesty International has called for an investigation.

In the wake of Carrasco’s findings and other reports of health problems, the Environmental Lawyers Association of Argentina petitioned the Supreme Court of Argentina to ban the use of glyphosate. But such is Argentina’s dependence on the GM soya farming model that Guillermo Cal, executive director of the crop protection trade association CASAFE, said a ban would mean “we couldn’t do agriculture in Argentina”. In addition, the government relies heavily on tariffs levied on soya exports and is protective of the industry.

In fact, Carrasco’s study is just the latest of a series showing hazards to health and the environment from glyphosate. Many of these are collected in a new report co-authored by nine international scientists, Carrasco among them, called, “GM Soy: Sustainable? Responsible?” The report presents over 100 peer-reviewed studies challenging industry claims of sustainability and safety for GM soy and the glyphosate herbicide on which it relies.

The people speak out

The new report was released with a series of interviews with Argentine people who have been affected by glyphosate spraying on GM soya. One interviewee is Dr Dario Gianfelici, from Cerrito, Entre Rios, Argentina, a rural family physician and one of the first doctors to report health problems in residents from the spraying.

He said: “Our town experienced drastic changes after soya. I’ve seen people die from cancer at age 30. I have witnessed pregnancy problems and a significant increase in fertility problems. I have seen an increase in respiratory diseases, as has never been seen before. GM soya has been a death sentence for humans and for the environment. No money can compensate for the damage that has been caused â€“ the contamination, the deaths, the cases of cancer and malformations.”

Also interviewed is Viviana Peralta, a housewife from San Jorge, Santa Fe, Argentina, who had to rush her newborn baby daughter to hospital after glyphosate and other agrochemicals were sprayed on GM soya from planes flying near her home. The baby had turned blue and Peralta herself suffered respiratory problems. Peralta said, “When I saw my baby like that, I said, ‘Enough. This cannot go on.'”

Peralta joined with other residents to launch a lawsuit that resulted in a regional court issuing a landmark ruling banning the spraying of glyphosate and other agrochemicals near houses. Peralta said, “I do not understand chemistry, I did not go to university, but I know what my family suffered. To people who are not familiar with this agricultural model, I say, ‘Do not believe the companies. Reject agrochemicals. Do it for the life of your children.'”

Most of Argentina’s GM soya crop is exported to Europe as livestock feed. But soya suffers from an image problem among European consumers. Reports about Amazon rainforest being destroyed for soya production have led to pressure on the industry to clean up its act.

In response, a forum on sustainable soya production called the Round Table on Responsible Soya (RTRS) was set up in 2005. RTRS members include the grain multinationals ADM, Bunge, and Cargill; the GM seed and agrochemical companies Monsanto and Syngenta; the retailers Waitrose and Marks & Spencer; and NGOs WWF and the Dutch church-based organization Solidaridad.

In 2011 the RTRS will launch a voluntary label for “responsible” soya that will reassure traders and consumers that the soya was produced with consideration for people and the environment. The RTRS has been criticized as greenwash by over 200 civil society organizations in South America and elsewhere because (among other factors) it will enable GM soya sprayed with glyphosate to be labelled as responsible.

Angel Strapazzon, a member of Mocase-Via Campesina, the peasant movement of Santiago del Estero, Argentina, had this to say about claims of responsibility made for GM soya: “Agribusiness companies have a lot of power and most of the media at their service. Sometimes we hear their lies and laugh. They say it is ‘sustainable and responsible’ but in reality it is only sustainable for their pockets.”

Strapazzon is working with other farmers to promote an alternative farming model to GM soya monoculture that promotes food sovereignty, diversified food production, and agroecology.