Monsanto, the controversial U.S.-based multinational company, has applied to conduct field trials with genetically modified maize in five locations across South Africa, including the Lutzville district in the Western Cape.

Scientific evidence on genetically modified (GM) food shows that it could cause a wide range of serious unexpected health impacts such as allergies, ingesting of pesticides, and super resistant germs. It can also transform the environment in ways we can’t predict, like increased pest and weed resistance, detrimental soil impacts, and impacts on beneficial organisms. In fact, Monsanto has been involved in a number of lawsuits involving hundreds of millions of dollars, usually over health issues and patent issues.

When GM maize was introduced in the Eastern Cape, it created great hardships for small-scale farmers, like forcing them to take out loans to finance their crops and change their production methods. Farmers were forced to grow monocrops with chemicals and patented seeds, instead of being able to save their seeds each year.

At Lutzville along the West Coast there in an experimental GM maize field already growing under the auspices of the Agricultural Research Council (ARC).

Organics is the answer

Overwhelming scientific evidence suggests that agro-ecological practices and organic agriculture can greatly increase productivity of agriculture. Studies demonstrate that organic agriculture has the potential to meet food security needs and sustain the current global human population without putting more farmland into production, and without the negative environmental consequences of conventional agriculture.

Despite all of this, South Africa is one of the top ten countries in the world in terms of producing GMO crops, and has plans to follow the chemical industrial model of agriculture rather than supporting small-scale farmers and agro-ecological approaches to food production.

The Right to Agrarian Reform campaign and members of the Lutzville community strongly oppose Monsanto’s field trials on social, economic, and environmental grounds. A public meeting was held at the Uitkyk Community Hall in Lutzville as part of ongoing efforts to promote alternative agriculture and the right to food sovereignty. 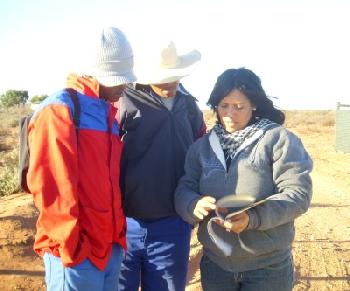 Do you know what you are eating?

Three facts about South Africa that mean everybody should take a stance on genetically modified organisms (GMO) RIGHT NOW:

This means all of us are eating GMOs, without knowing and without having agreed to it.

But what are GMOs? They are products of a new science called genetic engineering. Genes are found in the cells of all living things and contain the unique information through which a life form reproduces itself. Through genetic engineering, scientists take the genes from one organism and transplant it into another organism. For example they can transplant some of the genes from a tomato into an apple. They create new varieties of life forms that would not develop in nature. They do not, and cannot, know the impact of the new breeds.

Now the greed for profit motivation of the big food corporations like Monsanto has moved them to release these GMOs into our food and environment.

This has caused problems and raised a number of concerns around, among others, health, food sovereignty, the environment, religion and social justice: