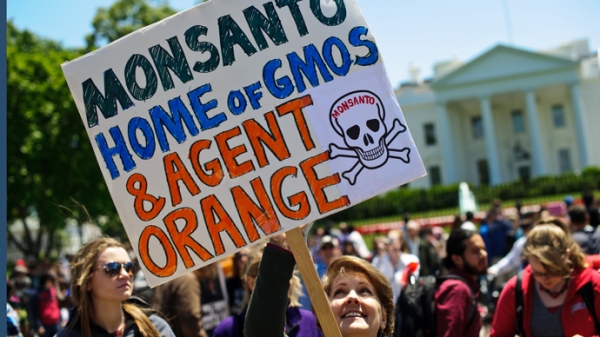 Monsanto, the world’s largest producer of genetically modified (GMO) and genetically engineered (GE) seeds, has a small victory to celebrate, as a three-month extension has been approved for the “Monsanto Protection Act,” a rider attached to the House Agriculture Appropriations Bill. The rider was quietly passed on Tuesday night, supported largely by Republicans.

The law, which was attached to the HR933 spending bill, a six-month-long resolution that was meant to avoid a government shutdown, went unnoticed by some lawmakers when it was passed. It protects Monsanto, Cargill, and other biotech firms from the threat of lawsuits, and prevents federal courts from taking action against GMO crops, even if they are found to cause negative health effects in the future, RT reported. The extended spending bill will now expire on Dec. 15.

“We have received no indication that this is a concern,” Jennifer Hing, a spokeswoman for the House Appropriations Committee, told the Huffington Post. She doesn’t believe the Senate will have any qualms about the rider. “It’s a very traditional [continuing resolution] in every sense of the word. It simply continues existing law.”

Meanwhile, the Center for Food Safety, an opponent of the rider, decried the extension saying that it “undermines federal courts’ ability to safeguard farmers and the environment from potentially hazardous genetically engineered crops.”

“Wrapped in a ‘farmer-friendly- package, the rider represents a serious assault on the fundamental safeguards of our judicial system and would negatively impact farmers, the environment, and public health across America,” a statement on the Center’s website said. “The rider would strip federal courts of their authority to halt the sale and planting of an illegal, potentially hazardous GE crop and compel the USDA to allow continued planting of that same crop upon request.”

The bill’s controversy comes from two sides. For one, the health and environmental effects of GE crops are very unclear. GE crops are created by mixing certain aspects of the plants’ DNA to make them tastier, more nutritious, disease- and drought-resistant, and more. But the FDA relies mostly on Monsanto’s and other GE firm’s own studies to prove that their products are safe.

In 2009, Food Democracy Now collected signatures in an attempt to prevent the approval of Monsanto’s GMO alfalfa seeds out of fear that they would cross-contaminate with organic feed used by dairy farmers — the seeds were still approved.

The original passing of the rider was highly controversial too. Sen. Roy Blunt (R-Mo.) actually worked alongside Monsanto to help craft its language, the NY Daily News reported. In an interview with the Huffington Post, Blunt said that being raised on a dairy farm showed him that “once you’ve made a decision to plant a crop for that year, you can’t go back and undo that decision,” adding that it wouldn’t be a good strategy to require Monsanto to compensate farmers for lost income after they discover their crops can’t be sold.

Food Democracy Now had also arranged a petition in front of the White House just prior to the bill being signed in March. A petition of the rider, on CREDO Action, had received its first 100,000 signatures within 24 hours, Becky Bond, head of CREDO, told the Huffington Post at the time.

“People are really passionate about the issue,” she said. “A lot of the time people feel helpless with regard to corporate decisions.”