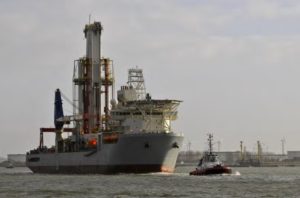 The Department of Mineral Resources has given the go-ahead for Italian group Eni to conduct drilling off the coast of KwaZulu-Natal. Image: Eni

Marches, protests and objections to plans to drill for gas and oil along the KwaZulu-Natal coastline over the past few years have come to naught.

The Department of Mineral Resources (DMR) has granted environmental authorisation to the Italian energy group, Eni, and Sasol Africa to conduct exploratory drilling in the Durban and Zululand basins, covering a total offshore area of more than 4,600km2.

The operations arise from the government’s Operation Phakisa (hurry up) which aims to unlock the economic potential of South Africa’s oceans by promoting various commercial activities, including gas and oil extraction, and at the same time provide much needed environmental protection – two very conflicting goals.

The original exploration was granted to Sasol in November 2013 by the Petroleum Agency of South Africa. Sasol subsequently farmed out the permit to Eni, which will be responsible for operations with Sasol retaining a major interest in Block ER236.

Due to numerous objections during the public consultation hearings, environmental authorisation was repeatedly withheld. However, the serious concerns of a wide range of environmental organisations and others, including tourism operators, leading marine scientists, recreational and commercial fishing operators, and subsistence fishermen, now appear to have been disregarded by DMR in in its drive to fast-track gas and oil extraction along South Africa’s East Coast.