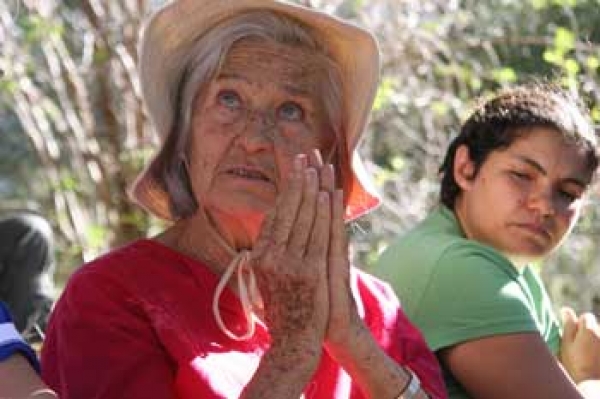 A beloved and absolutely key figure in biodynamic circles, Jeanne Malherbe, died recently. At her funeral at Bloublommetjieskloof farm outside Wellington, Rev. Richard Goodall made told the story of her life: Ten days before her 78th birthday Jeanne received the last anointing in full consciousness. She expressed how for her this was a great opening up to an unseen world from which she had felt closed off for a long time.

The following night, 16th September, she died peacefully in her sleep. It is right that she should be laid to rest in the soil of this farm which has been the focus of her life for the last 40 years. Jeanne was born on 26th September 1931. Her father was one of the first two naturopaths in Cape Town and through him a love of nature and of enhancing its natural processes was instilled in Jeanne early on. She qualified as a nurse but was never comfortable with hospital medicine and decided to travel to America. The trip expanded her world hugely. She criss-crossed the whole of the States. Her search led her to London where she enrolled for training in Floral Art. During this time she travelled Europe, often by scooter. These were exciting and carefree years for her.

She was ‘bursting with ideas’

Back in Cape Town, Jeanne and three friends opened a flower shop. Jeanne had a great sense of beauty and had a flair for wild flower arrangements, which expressed something of her enthusiasm and larger-than-life nature. While working as a florist Jeanne discovered Anthroposophy and a whole new world of exploration began for her. She heard about biodynamic farming, a new approach to agriculture aimed at healing the soil and enhancing its natural processes. She left for England and enrolled as one of the first Biodynamic Agricultural students at Emerson College.

After her studies she completed a practical training on a BD farm in Germany. Jeanne returned to South Africa to find a farm to work and heal, and at the age of 38 was helped to buy Bloublommetjieskloof. The farm did not have particularly good soil. She launched herself into a huge enterprise against considerable odds but with unshakeable conviction about the rightness of what she wanted to do. She had to deal with the difficulties of being a lone woman farmer, bringing new ideas and trying to heal depleted soil – all with very little money.

Over the years her vision for the farm developed to include a dairy herd, cheese and yoghurt production, mixed farming with fruit and vegetables for market, a community of farming people and a community of arts and crafts people on the farm, and a wide community of supporters outside. It was also to be a place of learning and spiritual striving, a place of refuge where people could find their direction, and above all a place of beauty and care. Jeanne worked like a Trojan to bring this about despite many setbacks. She drove around Cape Town in her little van delivering veggies, bakes and dairy produce.

She established a legendary stall at the Rondebosch Market. She milked, baked, picked, preserved, made cheese, made compost and passed on her knowledge inexhaustibly. ‘Friends of the Farm’ was established, and there was a newsletter and Open Days. These were always accompanied by wonderful meals. Jeanne had a great sense of celebration and even the most simple meal was always beautifully presented with flowers. She was immensely industrious and expected those around her to work equally hard.

Jeanne read copiously. She was bursting with ideas about farming and nutrition and always keen to pass them on. Her vision of the farm was never quite completed but her contribution to the BD movement and to countless people is immense. She also loved to travel, and remained inwardly youthful. In February she took up the invitation to give a lecture at a BD Conference in Switzerland, which she considered the crowning moment of her working life.

She did this with typical determination despite the fact that she was ill. For six years she had had to contend with cancer and more recently a heart condition. Jeanne was at peace with letting go of her physical body and moving on. She understood that this was not the end but only a step in a much greater journey on which she would have new tasks. She has moved on into the light of the spirit world accompanied by your loving thoughts and prayers.

The Green Rimes spoke to Helen Van Zyl, chairperson of the Biodynamic Association of Southern Africa:

“Jeanne was one of the main pioneers of BD farming in this country – as a woman even more so. It was unique at the time. People were initially skeptical of what she was attempting but she held to her vision and successfully realised the BD ideal; she cultivated the fertility of the soil; worked to nourish people with healing foods; and opened the farm as a social centre for people to learn about ecology.

Jeanne had a special relationship with the cow. She believed that cows brought fertility and completeness to a farm. It was interesting that at her funeral held overlooking the valley, the bloublommetjies and spring flowers were wide-open and dancing in the sun, and her beloved cows were there, looking on. There was no doubt in my mind that she had been in communion with the elemental worlds, and that they were honouring the incredible love with which she had worked.”