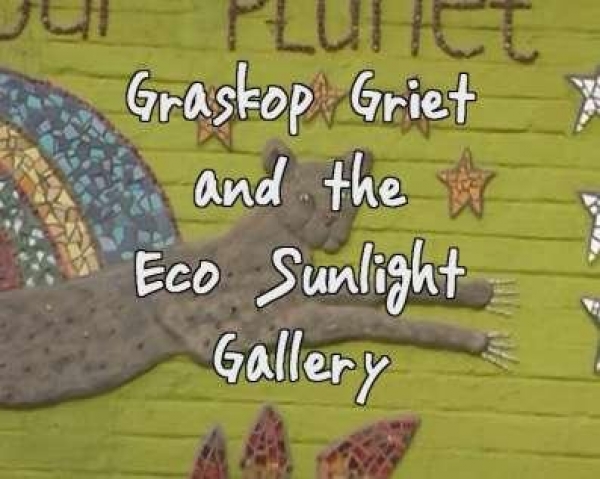 ‘Heal our planet, nurture nature and all her creaturesâ€ the words of the bright mural stood out from the kaleidoscope of birds, flowers, trees, stars, leopard and antelope. I was amazed to see such a beautiful mural at the back of the garden of the Sunlight Gallery in the sleepy town of Graskop, Mpumalanga. The artist, Griet van der Meulen wandered past and I asked if I could take a photograph of the mural. I explained that I am an environmentalist, a term that I dislike in the sense that it implies that others are not, and she replied ‘off courseâ€ and proceeded to show me other artworks. ‘Wait’, I said and rushed to the car, grabbed my video camcorder and rushed back.

According to Griet her work ‘is about the planet and the destruction that man is plying upon the planet.’ Her philosophy is simple and re-emerges through each artwork: ‘Everything on the planet is connected and the life that flows through every person flows through every leaf.’ Through her art, Griet is trying to create an awareness of the need to nurture nature and to heal our planet. 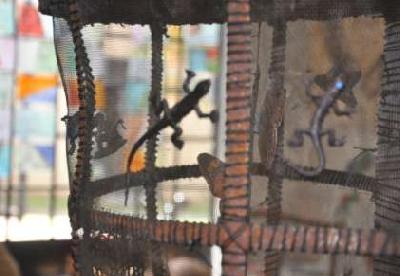 ‘This piece,’ she explains pointing to a rusted metal cylinder hanging from the ceiling, ‘is supposed to be a time capsule.’ Inside are butterflies, lizards and other images of nature, whilst outside little toy soldiers are pointing their guns every which way. ‘Its like a Noah’s Ark – if the planet does destruct you can look inside the time capsule to find some DNA and can start afresh. At the bottom, a symbolic cross – made out of bullets – hangs below the time capsule. ‘The cross for healing and the bullets for destruction represents the dichotomy of what we as humans are doing – we try to be good but we are not,’ says Griet. The headless man hanging below the cross represents that we are probably destroying ourselves in the process of destroying everything around us.

A beautiful rich painting of two wild dogs strikes me next – a rich tapestry of reds and browns. Embroidered stitches are painted around the wild dogs, and sadly Griet tells me this is representative of a quilt and the age old tradition of saving your memories before they are forgotten. In her quilt Griet has painted the wild dogs believing that their time is passing, and the symbols at the bottom of the painting – playing cards and an African board game – represents the fact that we humans are playing with life and death and nature. It is a game where other species lose, constantly. The painting is called ‘Hold Onto.’

Rabbits as a metaphor for life is a wonderful painting of three rabbits forming a circle around a human heart. Griet explains that the rabbits represent life, fertility and vitality, whilst the human heart signifies that everything on the planet is connected and for all to work to everybody’s mutual benefit we must consider ourselves as one organism. This world view calls for respect and the sense of ubuntu extending to all life, not just people. I am because we all are. 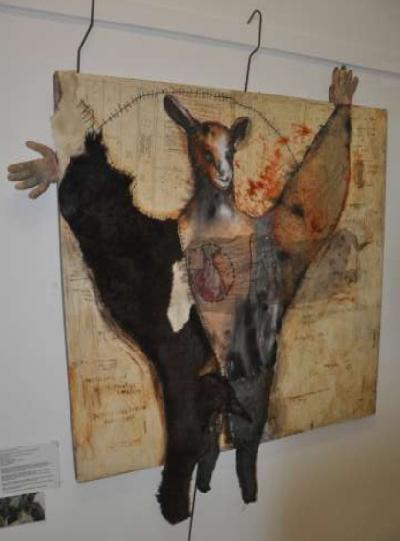 Botched – a large and, in my opinion, rather harsh painting of a goat/human chimera both haunts and repulses me. It has the same theme of a human heart but coupled with a goats head and human hands and an animal’s skin. It is called Botched, because according to Griet it is like a botched taxidermy where man and animal come together as one, but in unnatural ways such as the scientific planting of human stem cells in animals and then growing a human heart. Botched represents post modern man who is far from perfection but instead is fractured and broken.

Against the wall are three paintings which together form a triptych of domestic animals. Triptychs, Griet explains to me, were used in the middle ages to depict religious themes. In her triptych she depicts the sacrificial lamb, and as Jesus was sacrificed, so are our animals being sacrificed as food for humans. The triptych is a shrine honouring the holiness of our animals, and includes a hand for protection and a cross for healing. The message is that we need to be more aware of the plight of animals.

I leave the gallery and drive on through the Blyde River Canyon, and then the Kruger Park, realizing how little space we have put aside for the nurturing of nature and that the simple eco messages of Griet’s art need to be shared with as many people as possible.