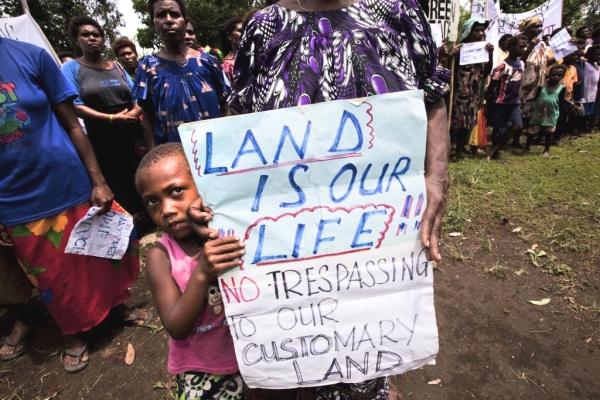 A Greenpeace report says that more than 12.35 million acres of customary-owned land in Papua New Guinea have been “given away” to foreign-owned corporations and unrepresentative landowner companies.

The report, called “Up for Grabs,” points to a concession introduced by Papua New Guinea’s Somare government in 2003 called Special Agricultural and Business Leases, which it says were often awarded without the permission of customary landowners.

Greenpeace says 75 percent of the leases are foreign-owned and some of the biggest beneficiaries are Australian and Malaysian logging companies.

Papua New Guinea has the world’s third largest tropical forest. But a 2008 satellite study, citing the rapid deforestation, indicated that more than half of PNG’s trees could by lost by 2021, The Guardian newspaper reports.

The Greenpeace report says that log exports in 2011 grew nearly 20 percent, attributing the increase “almost entirely” to logging within SABLs.

“The land grab in Papua New Guinea is a national scandal,” said Greenpeace Forests Team Leader Paul Winn. “People are losing their land and their livelihoods for up to three generations and their forests forever.”

The majority of the country’s population of more than 6.3 million practices subsistence-based agriculture.

The 48 largest SABLs – representing 95 percent of the total SABL area – contain 12 percent of the nearly 7 billion tons of above-ground carbon stored in the country’s forests, Greenpeace says. Those 48 SABLs, if logged and deforested, would release nearly 3 billion tons of carbon dioxide, equal to Australia’s total CO2 emissions for the next 6 years, the report says.

Winn is urging PNG’s new government to introduce legislation that overturns and nullifies leases that were granted fraudulently or that land owners have objected to.

“One of the first tasks of the new PNG government must be to suspend logging under SABLs and review and amend legislation so that communities are protected from the rapacious appetite of foreign-owned logging and agriculture companies,” Greenpeace said.

Papua New Guinea’s Parliament is to convene Friday when it is expected that Peter O’Neill will be elected prime minister, the Australian Broadcasting Corp. reports.

Up For Grabs can be downloaded here.