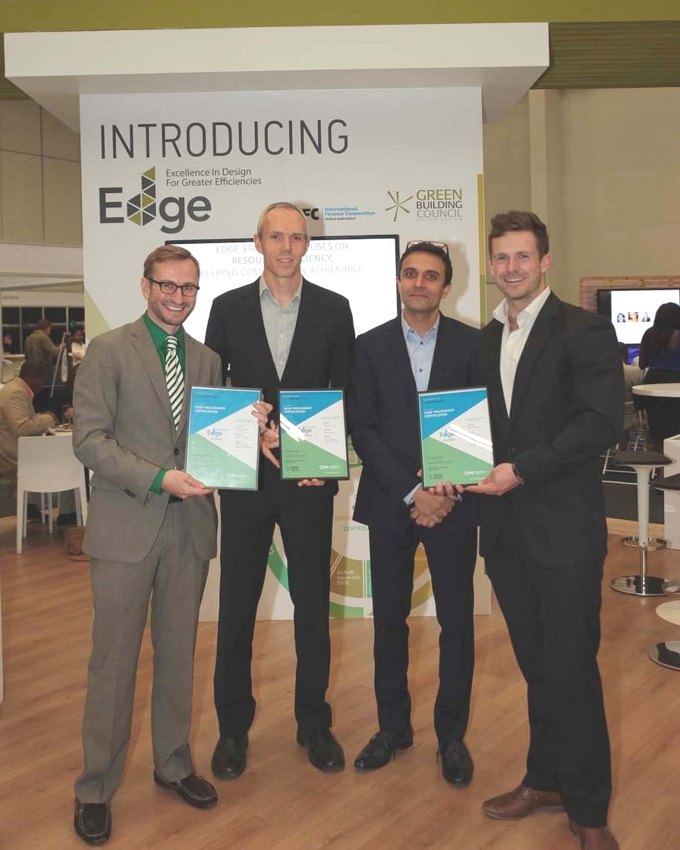 This was announced by GBCSA Chief Executive Officer, Brian Wilkinson, at the 2015 Green Building Convention in Cape Town on Friday. Wilkinson revealed that the Ravenswood affordable housing development in Ekurhuleni, Gauteng, has become the first residential project in Africa to achieve an EDGE Design Certification. The development is led by affordable housing fund, International Housing Solutions (IHS), who are rolling out a number of residential developments in South Africa that will be EDGE certified.

Created by the International Finance Corporation (IFC), a member of the World Bank Group that focuses on the private sector, EDGE was brought to SA a year ago by GBCSA. It was launched at the GBCSA’s 7th annual Green Building Convention in September 2014.

Wilkinson comments: “Awarding the first EDGE pilot rating in the country is a significant milestone, not just for the GBCSA and its partners in the programme, but for the South African residential property sector and its journey toward going green and becoming more sustainable. We appeal to the residential property industry to join the movement to change the way homes are built in SA.”

He adds: “The Ravenswood development is officially the first residential project to secure an EDGE rating as part of the GBCSA’s piloting of the residential green building tool in SA, but two other projects have also since secured EDGE certification too. Following this pilot phase, the GBCSA is now ready for a full roll-out of EDGE to residential development across SA.

Graham Cruickshanks, EDGE Technical Manager, explains: “IHS, the Ravenswood owners, will work with the GBCSA to achieve EDGE As-Built Certification for this development, which is the second and final stage in the process. According to IHS, the Ravenswood development is predicted to realise a saving of almost R600,000 a year by applying EDGE-certified energy efficiency measures. This would translate into an anticipated saving of approximately R3200 in utility costs for each unit.”

Located on Trichardts Road in Boksburg, Gauteng, the Ravenswood residential development will bring 188 two-bedroom green homes onto the local market. IHS is acquiring all 188 units in the development as rental stock from RPP Developments.

“Total savings annually of 250,000kWH of electricity and more than 10,000Kl of water has been demonstrated in the EDGE design rating of the Ravenswood project. EDGE helped us crunch the numbers to reveal the most affordable path to building green,” explains IHS Dealmaker, Myles Kritzinger.

Efficient energy usage is set to be maximized at Ravenswood through the use of solar hot water collectors and efficient water usage through the installation of smart meters and low-flow bathroom and kitchen fittings. Reduced window-to-wall ratios and roof insulation will also ensure optimal energy efficiency. The EDGE certification process involves two steps: preliminary design certification of the design, followed by as-built certification.

Cruickshanks says: “What sets the EDGE rating tool apart is that it is comparatively simple and inexpensive to use, making it invaluable to developers looking for smart and effective ways to differentiate their product in a tough economic climate, whilst also tackling important environmental issues.

As part of the GBCSA’s roll-out of EDGE, training for EDGE Accredited Professionals kicks off later this month (November). Interested parties can book for the course online on GBCSA’s website. The EDGE roll-out will be led by Cruickshanks who will head up all EDGE related activities at the council.

Globally, IFC’s aim is to transform 20% of new residential and commercial building in rapidly-industrializing countries within the next seven years, led by local green building councils and global certification providers.

“From the most humble homes on the outskirts of Johannesburg to high-end residences on Cape Town’s coastline, all South African homebuyers and their families now have the opportunity to enjoy a better quality of life,” says Prashant Kapoor, IFC’s Principal Green Building Industry Specialist and the entrepreneur who invented EDGE. “We are confident that GBCSA will play a leadership role in demonstrating to the rest of the continent what is possible when a strong commitment is made to deliver and scale up green homes with EDGE.”

Wilkinson concludes: “When the GBCSA and IFC announced the introduction of EDGE in the country last year, SA became the first nation to introduce the EDGE certification program for homes on behalf of IFC. It was a ground-breaking move. Now we want to take the roll-out of EDGE to the next level. EDGE-certified homes will attract prospective buyers who understand the long-term value of their investment in a green home, with its lower utility bills and higher re-sale price. This is the message we will be making to the residential property sector.”