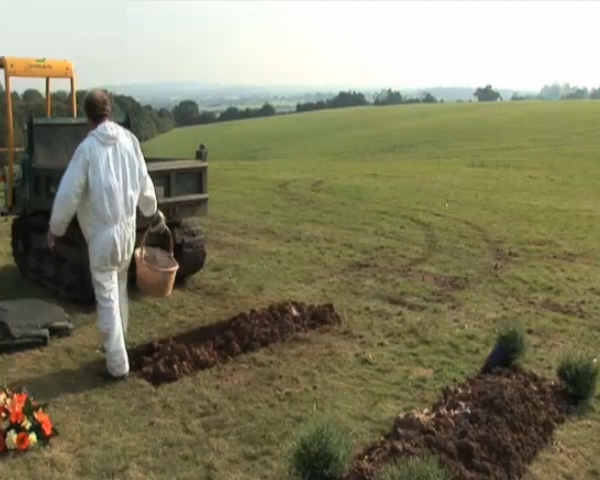 Burnt, buried or frozen and turned to powder are some of the options for dealing with the remains of a loved one whose last wishes include lessening death’s environmental impact.

Our demise can have a big environmental impact. Cremation uses about the same amount of domestic energy as a person uses in a month. Globally, cremation emits over 6.8 million metric tons of carbon dioxide every year, accounting for around 0.02 percent of world carbon dioxide emissions, experts estimate.

It also causes mercury pollution when tooth fillings are vaporized. Currently, up to 16 percent of all mercury emitted in the United Kingdom comes from crematoria, which could rise to 25 percent by 2020 without any action, according to government figures.

The UK government is forcing cremators to fit mercury filters by the end of 2012 to halve mercury emissions although statistics are not yet available on progress towards this goal.

Some companies are trying to cut overall emissions from funeral technologies by developing alternatives to cremation.

The wood required comes from 50 to 60 million trees a year. When burnt, they emit some 8 million metric tons of carbon dioxide emissions per year, according to Mokshda, a Delhi-based non-governmental organization which is working to reduce the environmental impact of funeral pyres.

The group says it has developed an alternative system which reduces heat loss, requires much less wood than a conventional pyre and cuts emissions by up to 60 percent.

In the UK, Scotland-based Resomation Ltd has developed a process which breaks down a corpse chemically in an alkaline solution.

Although the process uses very high temperatures to heat remains in a pressurized container, the firm claims the process uses one seventh of the energy of a standard cremation and cuts greenhouse gas emissions by 35 percent.

Resomation still has to be approved by the UK government for use in Britain but the firm has installed resomators in the United States, where some states allow it.

Suffolk-based Cryomation Ltd has developed a technology which freezes a body using liquid nitrogen until it is brittle, removes metal elements and turns the remains into a powder which could be composted, buried in a natural graveyard or scattered.

Having proven the technology, the firm is now seeking 1.5 million pounds ($2.4 million) to build the first unit.

a greener option than cremation

“The cryomation process has been talked about for far too long but never been delivered,” said Paul Smith, business development manager at parent company IRTL.

“Our technology can remove moisture at a cost-effective rate and at a suitable speed to make it a viable alternative to cremation with lots of environmental benefits,” he added.

A report last year by Dutch research group TNO said resomation and cryomation had the lowest environmental impact of all funeral methods and burial had the highest.

Indeed, burial is not a “green” option. It takes up space underground, the decaying process emits the greenhouse gas methane and caskets use a lot of steel, copper, bronze or wood.

embalming chemicals not good for nature

The effect of formaldehyde-based embalming chemicals when they leak into the soil and air through burial is also thought to be potentially damaging but needs more research.

However, for those seeking a greener burial, there are options. Natural or woodland burials are gathering pace in the UK. Over 260 such sites now operate across the country, since the first one opened almost 20 years ago.

Bodies are buried in a woodland setting, field or meadow in wicker, cardboard, or other environmentally sound coffins.

Environmental concerns, wanting to reconnect with nature, reducing the burden on families to look after traditional graves and cost are the main drivers for people choosing a natural burial, a Durham University study said last month.

By Nina Chestney, with editing by Paul Casciato