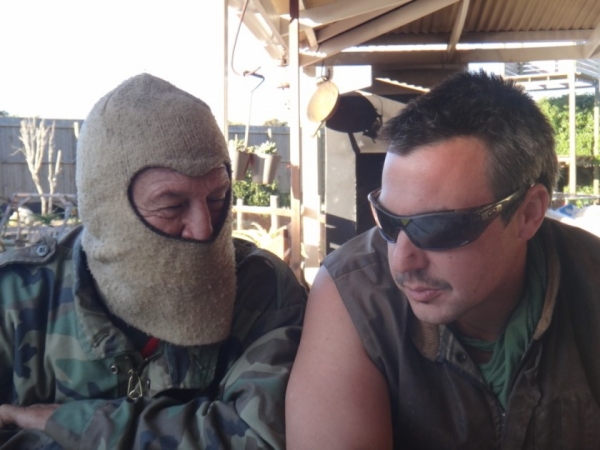 Akim Riemer wears doc martins, a ragged vest, a green bandana and dark glasses. There is a raw energy here that wants to spread like wildfire. I don’t need to see his eyes to know that they flash with insight and delight with his every new idea.

Riemer believes that the core element to sustain a new earthy project at Fish Hoek Primary school is RAW ENERGY. It will come from the waste that the kids collect and it will come from their enthusiasm as they pick up chain saws, power drills and handfuls of “stinky” compost.

“We are dealing with simplistic and primitive stuff here, but the results are phenomenal – we are promoting water and food security,” he says.

“We ended off with composting 50kg of dead flies and maggots, stabilizing the smell and then hot composting the critters. The smell we all will remember for the rest of our lives!” laughed Riemer, his eyes a-twinkle behind his dark glasses. 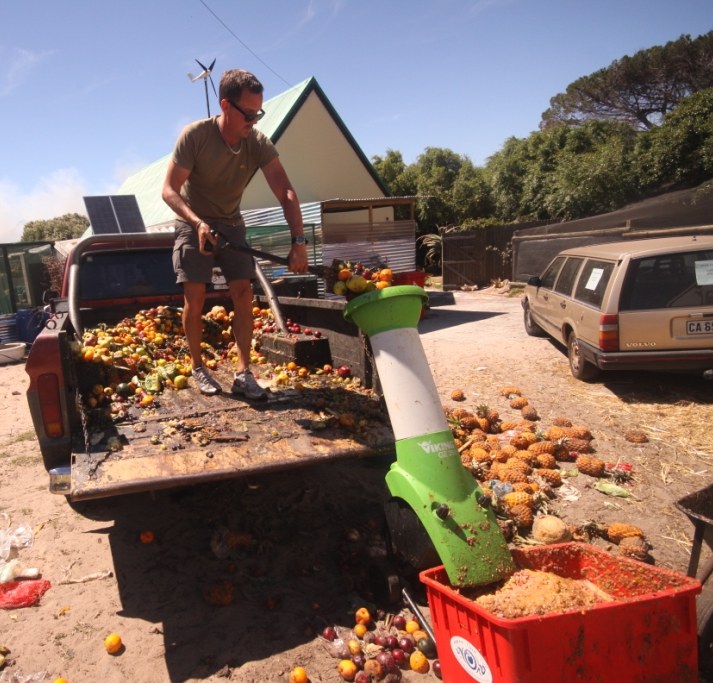 According to their website, the Green Guerrillas Group (GGG) believe that “it is time to rise and take action; it’s time to stop having meetings and writing agendas. It’s time to take responsibility, act and make a difference.” The Green Guerrillas “don’t play by the rules, are guided by nature and believe in a collective approach to sustainability.”

Every Friday the kids come with buckets of their kitchen waste to contribute to the amazing GGG goals of obtaining 100 x 20L buckets with a double seal lid. The action plan is to have 80 buckets for green surplus and 20 buckets for mixed surplus, explains Riemer.

“I’m not a bunny hugger – I focus on logic and reason. But we are shackled by consumerism and our kids are becoming batteries. We must become accountable, start urban agriculture, grow our own food!” he says vehemently. “Our kids are inheriting an age of Inconvenience. One of the biggest challenges facing the human species is that we have not prepared our youth, therefore we need to desensitise them – we have distanced ourselves from nature!” 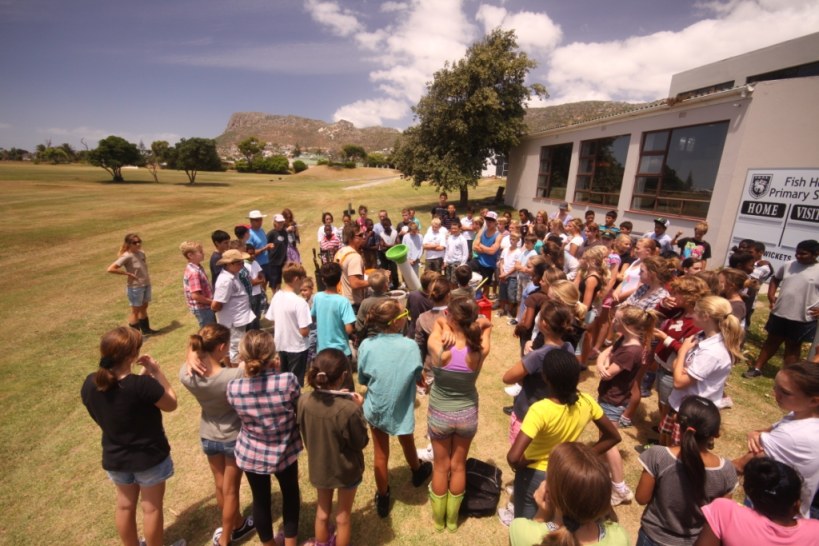 He stands like lord of the manor as he looks out over his designated property at Fish Hoek Primary School on the Southern Peninsula. It is here that the Green Guerillas will till the soil and give their worms work to do.

They have made a deal with Headmaster Grant Williams to promote a passion for nature amongst the learners, while creating sustainable food gardens in the “dead” areas between sports fields. No money changes hands, but all hands get dirty. Children are learning about their environment while preparing for their future and the school is adding value to their grounds and ethos.

Some regard leftover food as waste, but Riemer says “waste” is a swearword. “It is actually the art of stabilisation of the auxiliary surplus.” 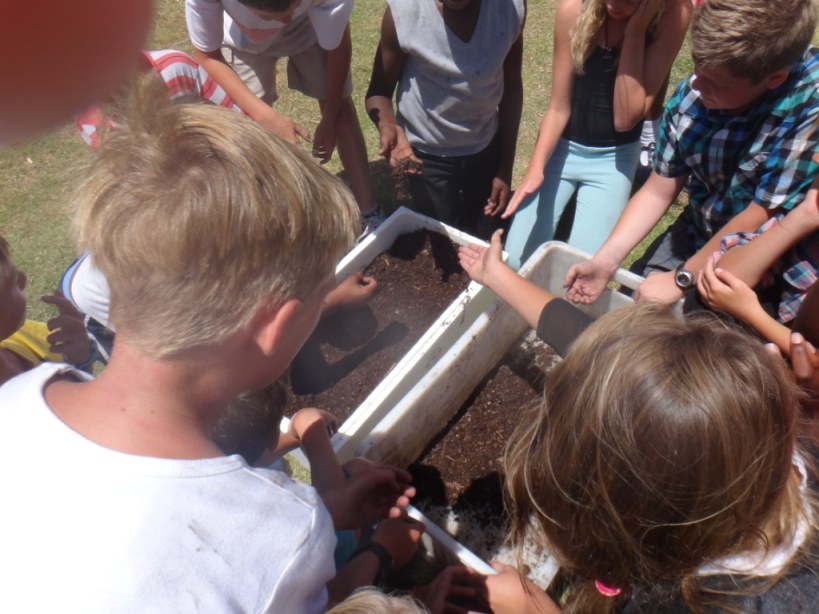 “With the use of anaerobic bacteria (effective microbes) we will stabilize the auxiliary surplus (waste) and recycle it into raw energy. This will drive the project forward and educate the children as they work with probiotic (life-giving) solutions. These elements are always around us and are beyond the material world – it is safe.”

“We live in rapidly changing times, and so too is our environment,” says Riemer. “It is clueless and stupid of us to think that our actions do not endanger the environment. It is arrogant to think we will kill the planet – the simple understanding is that the planet will kill us!”

Riemer believes that we need to adapt to environmental changes and transform the way we live. Waste is one area that the Green Guerrillas focus on. The Green Guerrillas are farming, experimenting and growing on a 10 000 square meter farm near Kommetjie. 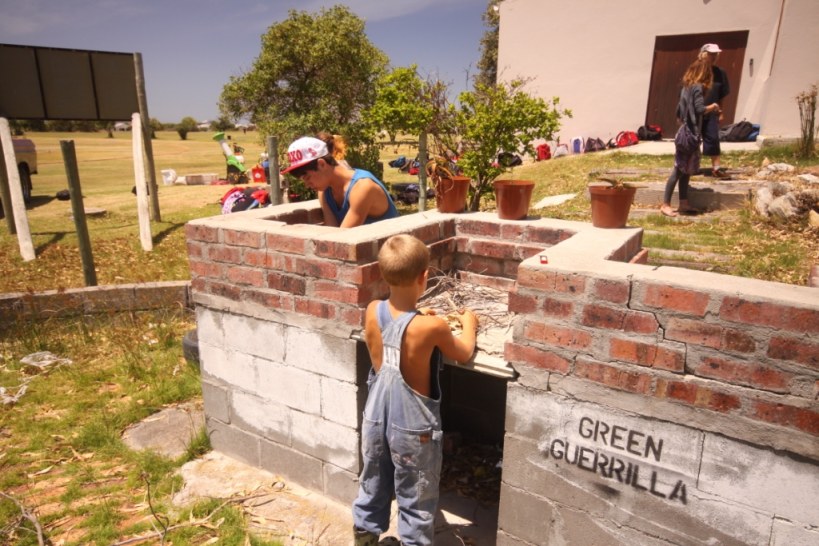 “The reason why we are so passionate here at the Green Guerrillas is because we see the end result of our stupidity and laziness – we see why this world is slipping down the slippery slope of our own destruction,” he exclaims. His worm populations are exploding, up to a confirmed 2000kg (2 tons) NET weight of worms.

“If it’s any consolation to mamma nature, the fruit was destined for the landfill. At least we have turned it into vermicast to grow organic produce – we pledge food grown will not be wasted – waste nothing!”

Riemer insists that Charles Darwin knew that earthworms have been on the planet for 650 million years and survived more change than any animal on this planet: “Of all animals, few have contributed so much to the development of the world, as we know it, as these lowly organized creatures,” Darwin wrote in 1881. 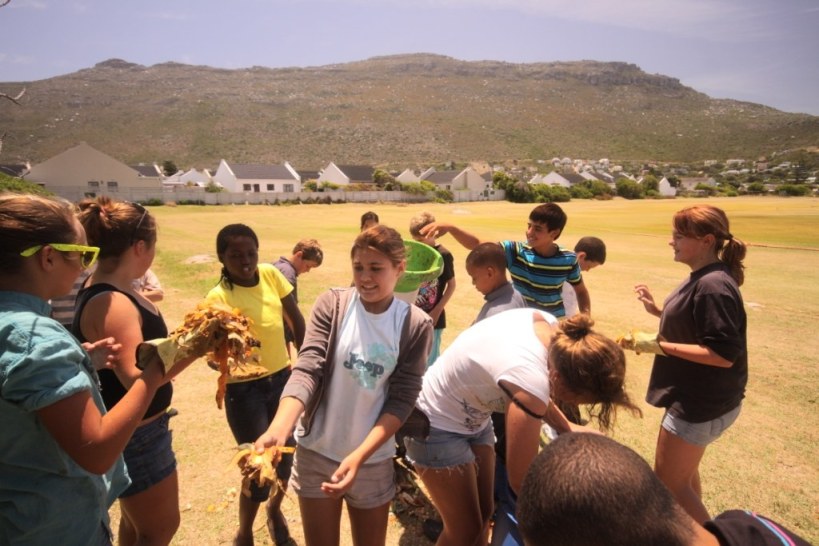 So: “If the meat eaters are to blame for the senseless killing of animals, are the vegetable and fruit eaters to blame for the senseless waste of organic produce? Is it the consumer who does not buy the apple because of the small brown spot? Or is it the ingrained notion that all vegetables and fruit must be shining like a golf ball with small beads of cool condensation for us to eat it, regardless of what chemicals have been put in it?”

Riemer lifts his dark glasses to survey his kingdom. “The next element is space,” he pontificates. “We need progressive methods about utilising space… but that is another story for next time!