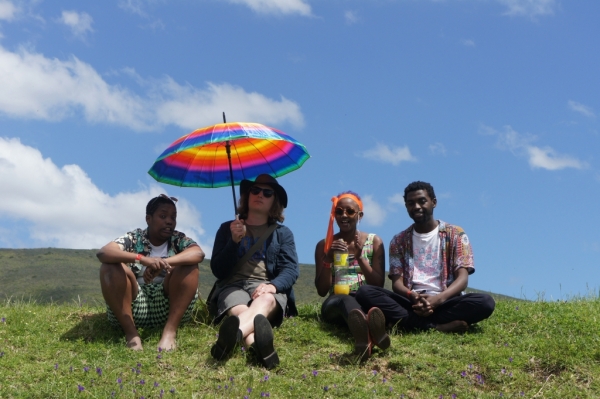 Earlier this month, Cloof wine estate in Darling played host to the biggest greenest music festival the Western Cape has yet seen.

I attended Rocking the Daisies with the dual roles of Green Times crew and performing musician. Debbie and I drove up without knowing exactly what to expect. We knew that the festival claimed to be “green”, as most of their marketing material suggested. In the end, we found that it was not just talk, they really did make a great effort.

Upon arrival, we were greeted by a friendly festival welcoming committee. They were busy celebrating having just sold their fifteen thousandth ticket, a first time sell out for Rocking The Daisies. They gave us our necessary accreditation and pointed us in the direction of the camp site. As media, we got to camp in the V.I.P. campsite, but we opted to camp in the general camping area instead, to experience the festival without our perceptions being blurred by special treatment. 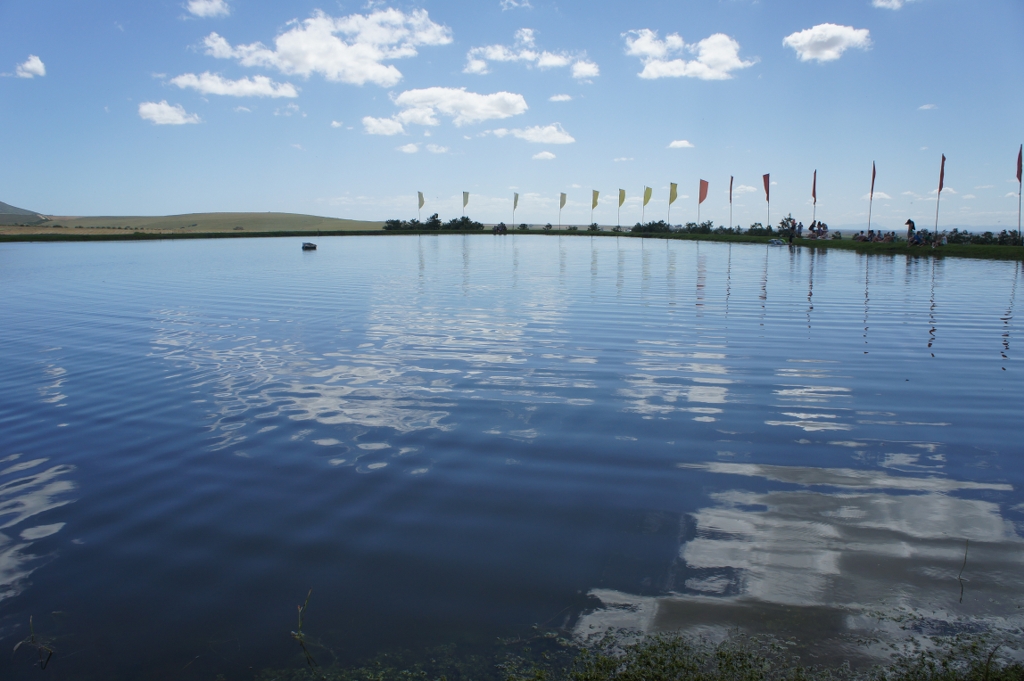 As far as camping goes, we found the experience to be relatively stressfree, and surprisingly clean. Often at festivals, people bring their cars into the campsite and blare loud music from their stereo systems. Not at Rocking the Daisies. At this festival, one has to park outside the camping area and carry all ones camping gear in. This makes a pleasant change, for someone that does not enjoy the mosquito-like buzz that usually occurs where there is a mixture of metal and trance music being imposed simultaneously on the general public.

One of the great initiatives that we spotted at the fest was called “Trashback – Rewards For Rubbish.” Debbie was pleased to learn that there would be no need to spend any money, or wait in long queues, to get cold refreshments. This initiative encouraged festival-goers to pick up cigarette butts, by rewarding them with beer. For every small cup of cigarette butts collected, we were given a large ice cold beer, which was most welcome in the festival sun. 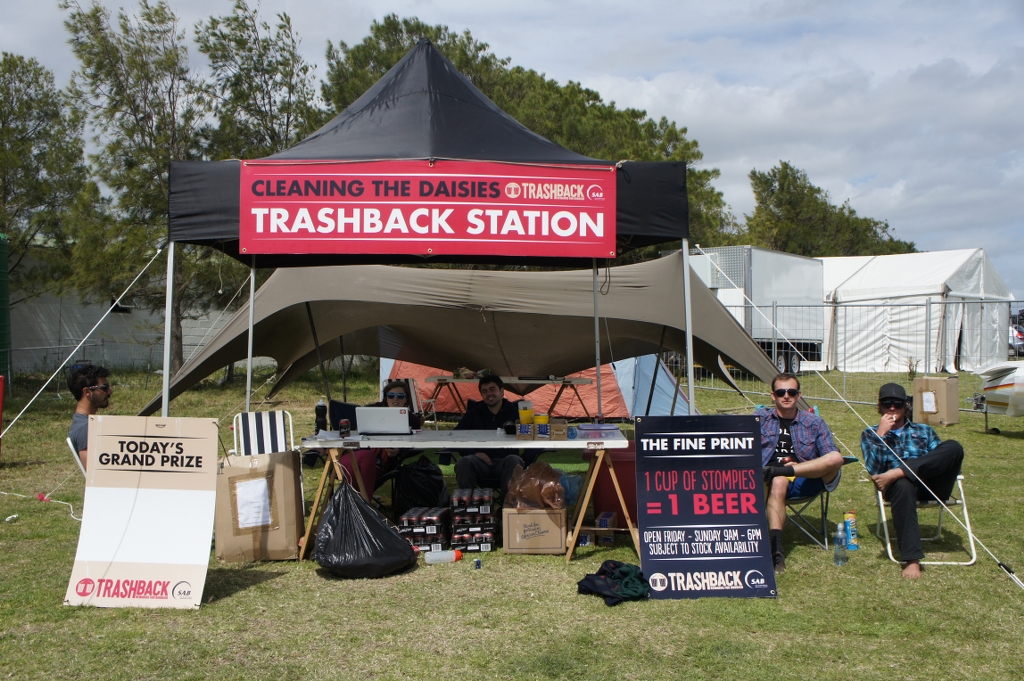 Green Times had our very own space in the Hemporium Green Village. There was a whole section of the festival set aside for this conglomeration of green initiatives. We set up a table and gave away vegetable seedlings, planted in toilet paper inner rolls. This nifty biodegradable plant holder can simply go into the soil together with the plant and helps retain water and protects the delicate root system until the recycled paper biodegrades into the soil. We battled to keep our brand new banner upright in the wind, but this compelled us to make innovative plans. We were also lucky to have many helpful friends. 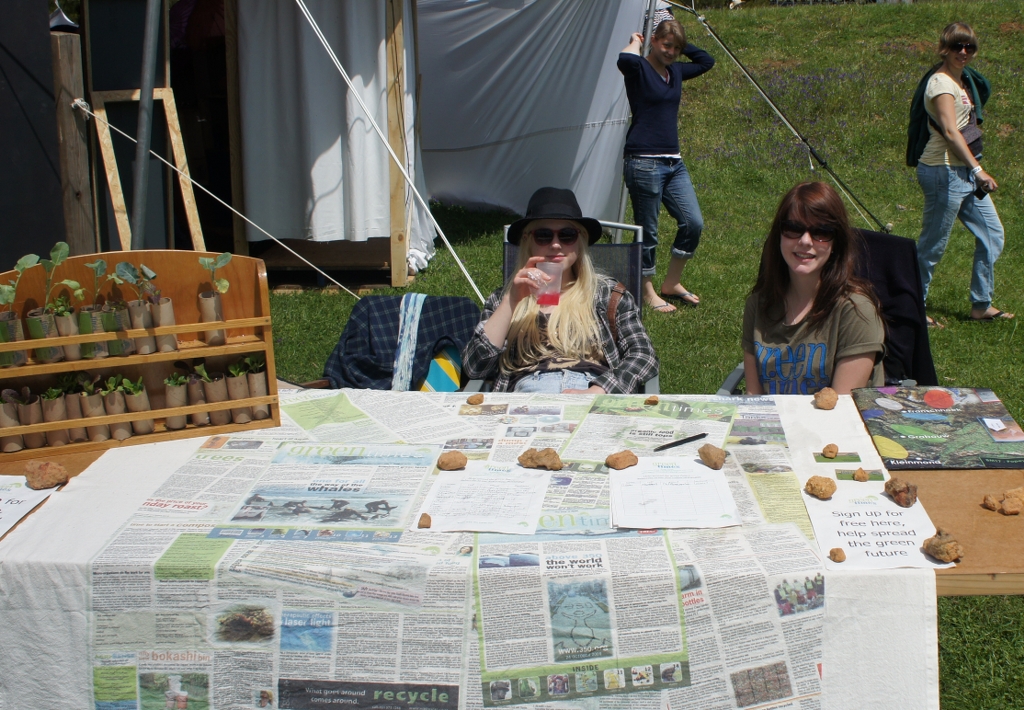 The general atmosphere in the Green Area was earth focused, so visitors were ready to join our initiative. Now it could be quite a challenge for a rock festival goer to keep a plant alive over a weekend like this, but we were happy to encourage the caring attitude and responsibility this would encourage. Debbie and I even kept a few plants aside, which we planted in re-used plastic containers on our front porch. Soon, we will have our own supply of bok choy, top soy, broccoli and red mustard leaves. I am particularly excited about the mustard leaf, as it far outstrips the lettuce leaf in terms of taste. 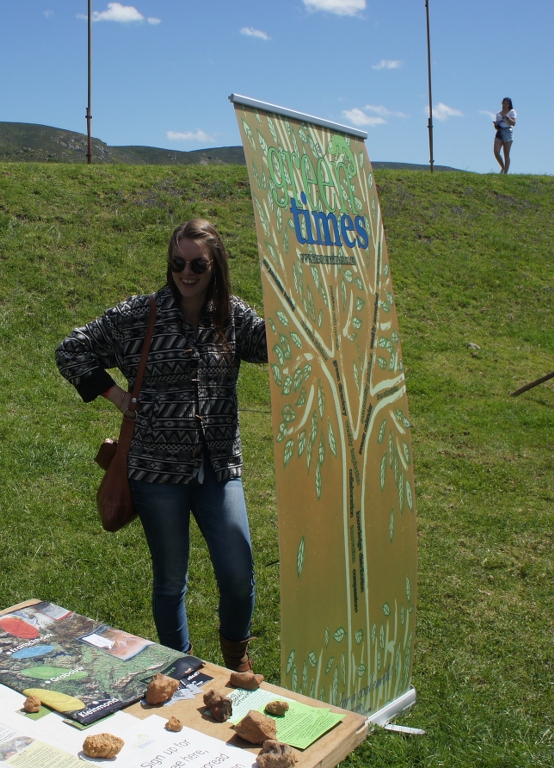 Right next to our stand, the “Swap Shop” conducted their moneyless trade. People were encouraged to hand in clothing, sunglasses, jewellery or pretty much any unwanted goods, which were then graded. Customers were given a card with a grade written on it, which they could then use to purchase any other items they wanted. I even spotted an electric guitar in there at one point, which someone traded an old necklace for eventually. 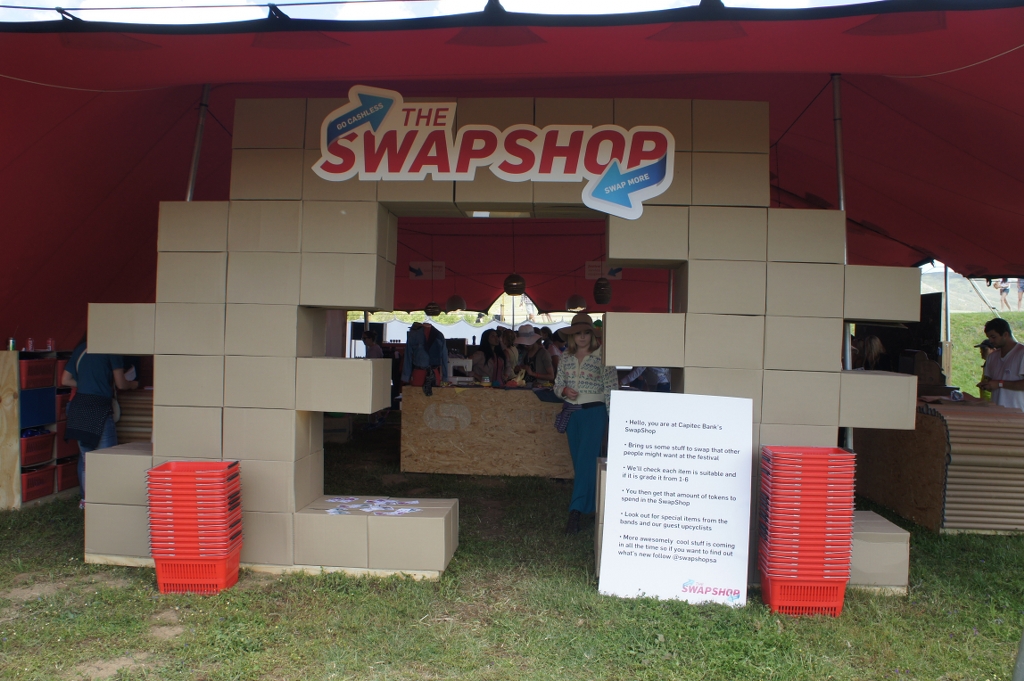 I would love to see this kind of thing happen more in Cape Town. This encourages people to give away their unwanted clothing and goods, so that they can be re-used by someone else that would appreciate them a lot more. Anything to prevent wastage. 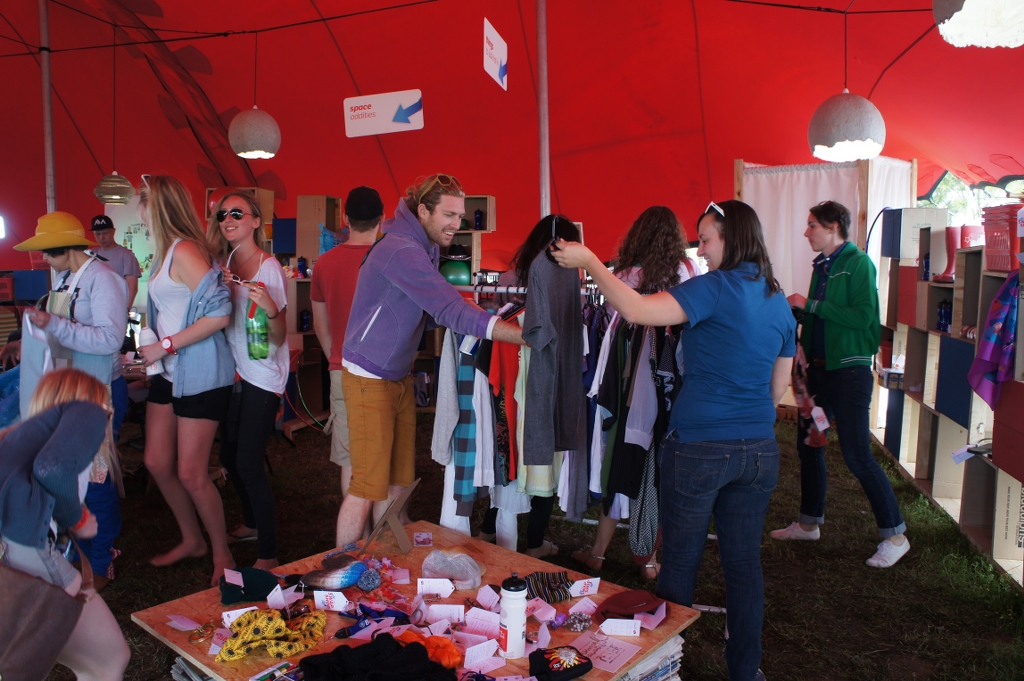 The Hemporium Green Village was completely solar powered, and apart from the numerous green stalls there, they also had a stage, which featured mainly acoustic acts. This entertainment was most welcome to us green stall holders. One of the acts we enjoyed the most was Miles Sievwright, a Cape Town based folk artist.

A full, comprehensive Eco Audit was undertaken by an independent organization called Steadfast Greening. This was to ensure that Rocking The Daisies would be as close to a carbon neutral event as possible by reducing where possible and off-setting any carbon that was expended in the production of the festival. This audit covers procurement to the production of the festival itself and the transport to and from the venue. Water, waste, carbon, energy are all areas that were monitored.

Due to its heavy footprint, bottled water was not available at Rocking the Daisies. Festival-goers were encouraged to fill up water bottles (their own, or the many official Daisies ones handed out for free) at any of the conveniently placed water stations. This was a great improvement over last year’s “Hydration Station,” which was the same idea except you could only fill up with an official bottle that had to be bought for R30.

Cleaning up after messy campers

The only disappointment that I experienced from this festival came in the form of a massive mess in the camp site on the Sunday morning. Clearly, many of the festival goers were not concerned about the impact of their waste. That being said, a few people complained about it on the Rocking the Daisies Facebook page, to which their response was as follows:

“One of the focuses of our festival is environmental education and while we definitely do our part to create a ‘green’ festival as you put it, it is also up to each person to take responsibility for their own waste. Every single bit of trash at the festival, including what was dumped outside each tent, is not only cleaned up but sorted for recycling purposes.”

That is good to know.

Rocking the Daisies for the win

Rocking the Daisies has won several environmental awards over the past few years.

Overall, my experience of Rocking the Daisies this year was better than any other festival I have attended. I will most definitely be attending again next year one way or another.