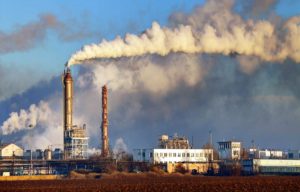 The industrial slowdown due to the COVID-19 pandemic has not curbed record levels of greenhouse gases which are trapping heat in the atmosphere, increasing temperatures and driving more extreme weather, ice melt, sea-level rise and ocean acidification, according to the World Meteorological Organization (WMO).

The lockdown has cut emissions of many pollutants and greenhouse gases such as carbon dioxide. But any impact on CO2 concentrations – the result of cumulative past and current emissions – is in fact no bigger than the normal year to year fluctuations in the carbon cycle and the high natural variability in carbon sinks like vegetation.

Carbon dioxide levels saw another growth spurt in 2019 and the annual global average breached the significant threshold of 410 parts per million, according to the WMO Greenhouse Gas Bulletin. The rise has continued in 2020. Since 1990, there has been a 45% increase in total radiative forcing – the warming effect on the climate – by long-lived greenhouse gases, with CO2 accounting for four fifths of this.

“Carbon dioxide remains in the atmosphere for centuries and in the ocean for even longer. The last time the Earth experienced a comparable concentration of CO2 was 3-5 million years ago, when the temperature was 2-3°C warmer and sea level was 10-20 meters higher than now. But there weren’t 7.7 billion inhabitants,” said WMO Secretary-General Professor Petteri Taalas.

“We breached the global threshold of 400 parts per million in 2015. And just four years later, we crossed 410 ppm. Such a rate of increase has never been seen in the history of our records. The lockdown-related fall in emissions is just a tiny blip on the long-term graph. We need a sustained flattening of the curve,” said Prof Taalas.

“The COVID-19 pandemic is not a solution for climate change. However, it does provide us with a platform for more sustained and ambitious climate action to reduce emissions to net zero through a complete transformation of our industrial, energy and transport systems. The needed changes are economically affordable and technically possible and would affect our everyday life only marginally. It is to be welcomed that a growing number of countries and companies have committed themselves to carbon neutrality,” he said. “There is no time to lose.” 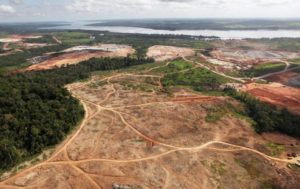 The Global Carbon Project estimated that during the most intense period of the shutdown, daily CO2 emissions may have been reduced by up to 17% globally due to the confinement of the population. As the duration and severity of confinement measures remain unclear, the prediction of the total annual emission reduction over 2020 is very uncertain.

Preliminary estimates indicate a reduction in the annual global emission between 4.2% and 7.5%. At the global scale, an emissions reduction on this scale will not cause atmospheric CO2 to go down. CO2 will continue to go up, though at a slightly reduced pace (0.08-0.23 ppm per year lower). This falls well within the 1 ppm natural inter-annual variability. This means that on the short-term the impact of the COVID-19 confinements cannot be distinguished from natural variability, according to the Bulletin.

The Bulletin is based on observations and measurements from WMO’s Global Atmosphere Watch and partner networks, which includes atmospheric monitoring stations in remote Polar regions, high mountains and tropical islands. These stations have continued to function despite COVID-19 restrictions hampering resupplies and rotation of staff in often harsh and isolated locations. 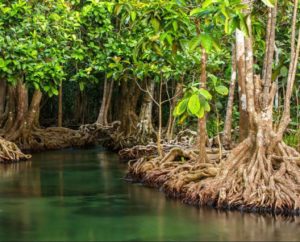 When it comes to storing carbon, scientists have put a price tag on the value of mangroves in South Florida’s Everglades – and it’s in the billions. Mangrove forests absorb carbon dioxide, and much of that carbon remains trapped in the trees’ biomass.

Carbon dioxide is the single most important long-lived greenhouse gas in the atmosphere related to human activities, contributing about two thirds of the radiative forcing. The annual globally averaged level of carbon dioxide was about 410.5 parts per million (ppm) in 2019, up from 407.9 parts ppm in 2018, having crossed the 400 parts per million benchmark in 2015. The increase in CO2 from 2018 to 2019 was larger than that observed from 2017 to 2018 and also larger than the average over the last decade.

Emissions from combustion of fossil fuels and cement production, deforestation and other land-use change pushed 2019 atmospheric CO2 to 148% of the pre-industrial level of 278 ppm, which represented a balance of fluxes among the atmosphere, the oceans and the land biosphere. During last decade about 44% of CO2 remained in the atmosphere, while 23% was absorbed by the ocean and 29% by land, with 4% unattributed. 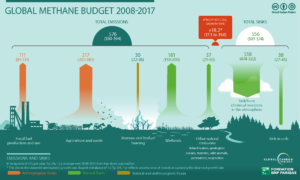 Diagram showing the main sources of methane for the decade 2008-2017, produced by a global report on global methane emissions by the Global Carbon Project. Image: Wikipedia

Methane, a powerful greenhouse gas which remains in the atmosphere for less than a decade, was 260% of pre-industrial levels in 2019 at 1 877 parts per billion. The increase from 2018 to 2019 was slightly lower than that observed from 2017 to 2018 but still higher than the average over the last decade.

Methane contributes about 16% of the radiative forcing by long-lived greenhouse gases. Approximately 40% of methane is emitted into the atmosphere by natural sources (e.g., wetlands and termites), and about 60% comes from anthropogenic sources (e.g., ruminants, rice agriculture, fossil fuel exploitation, landfills and biomass burning).

Nitrous Oxide, which is both a greenhouse gas and ozone depleting chemical, reached 332.0 parts per billion in 2019, or 123% above pre-industrial levels. The increase from 2018 to 2019 was also lower than that observed from 2017 to 2018 and practically equal to the average growth rate over the past 10 years.

Several other gases are also presented in the Bulletin, including the ozone depleting substances regulated under the Montreal protocol.

The WMO Global Atmosphere Watch Programme coordinates systematic observations and analysis of greenhouse gases and other atmospheric constituents. Greenhouse gas measurement data are archived and distributed by the World Data Centre for Greenhouse Gases (WDCGG) at the Japan Meteorological Agency which celebrates its 30th anniversary in 2020.

A separate and complementary Emissions Gap Report by UN Environment assesses the latest scientific studies on current and estimated future greenhouse gas emissions; they compare these with the emission levels permissible for the world to progress on a least-cost pathway to achieve the goals of the Paris Agreement. This difference between “where we are likely to be and where we need to be” is known as the emissions gap.