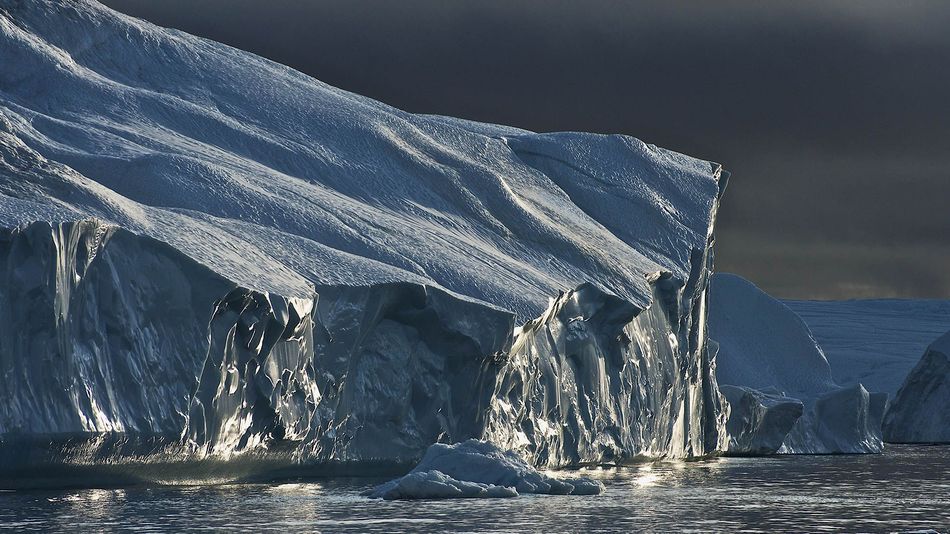 In 2016, Greenland has seemingly been on a mission to prove that it, too, can experience truly warm weather of the sort that is typically confined to far more temperate areas.

So far in June, the world’s largest island has experienced record warmth that would be considered mild even in the lower 48 states. Take June 9, for example. That day it was warmer in Greenland’s capital of Nuuk — at 76.5 degrees Fahrenheit, or 24.7 degrees Celsius, than it was in New York City, which had a high temperature of only 71 degrees Fahrenheit, or 21.6 degrees Celsius.

Warmest June ever in Greenland

The 75-degree high temperature set a record for the warmest temperature ever recorded on the island during the month of June. This came just one month after records toppled during an April heat wave in many of the same areas of Greenland.

Amazingly, though, that record stood for only one day. On June 10, the temperature in Nuuk reached 24.8 degrees Celsius, or 76.6 degrees Fahrenheit, the Danish Meteorological Institute (DMI) found.

According to the Washington Post, the DMI, which monitors conditions in Greenland, “has confirmed on a preliminary basis that the Nuuk measurement would replace the previous record of 73.8 degrees (23.2 Celsius), which was set in Kangerlussuaq on June 15 in 2014.” 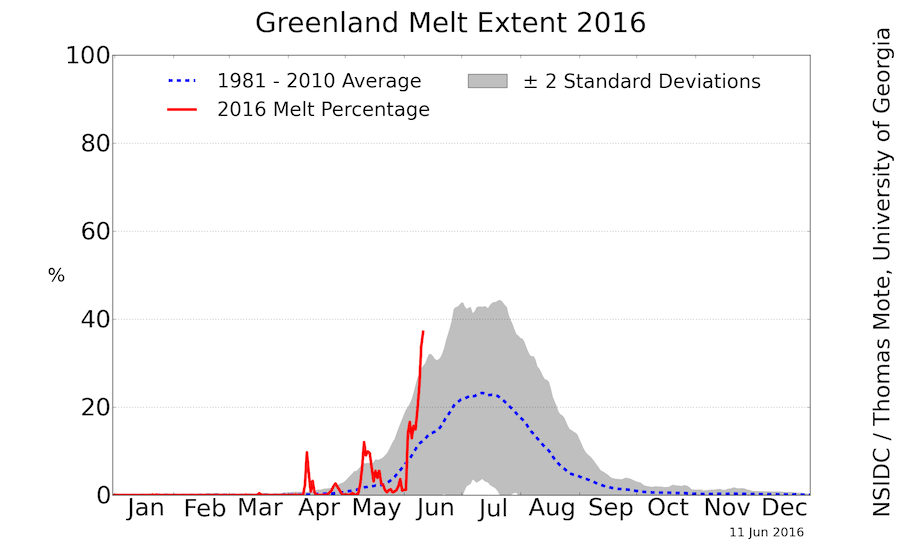 The Post noted that both of those record high temperatures were set at locations in southwestern Greenland.

In that area, winds can occasionally blow downhill from east to west, warming the air mass as it compresses and sinks.

This process is known as adiabatic warming, and it occurs in places in the U.S., too, most prominently in Southern California, where the Santa Ana winds can result in hot and dry conditions in Los Angeles and San Diego.

The record warmth in Greenland has caused the melt season to fast-forward, with a corresponding spike in melting seen via satellite monitoring and surface observations from scientists on the ice sheet. Continued warmer than average conditions are likely in Greenland this week as well.

The fate of Greenland’s ice, particularly how fast it is melting, is an uncomfortable wild card in climate science. If the entire ice sheet were to melt tomorrow (which is not going to happen), global sea level would rise by up to 23 feet, inundating highly populated coastal areas around the world.

Recent studies have predicted a faster melt of both parts of Antarctica and Greenland as more information about the instability of key glaciers has come in, leading to the very real possibility of 1 meter, or 3.3 feet, or more of sea level rise worldwide by the year 2100. 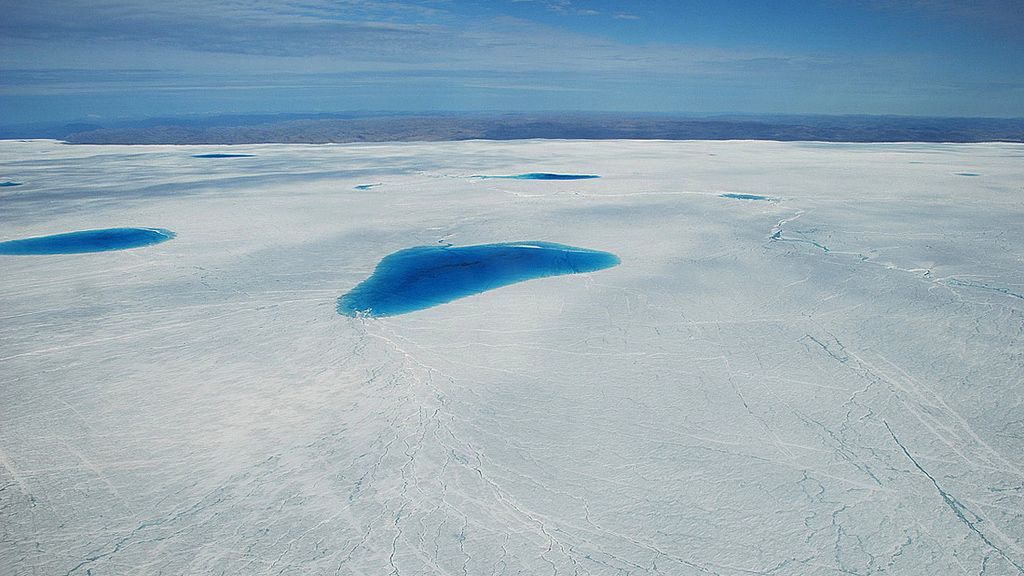 Example of a melt pond on the surface of Greenland ice sheet. Image: NASA/IceBridge

The Greenland heat wave and melt spike comes in the midst of a frighteningly mild year in the Arctic overall. Greenland had the earliest start to its melt season on record, with the season kicking off during unusual warmth during the April 10-15 period.

This event, according to the National Snow and Ice Data Center (NSIDC), was caused by “a large pulse of mid-Atlantic air moving northward, bringing record warm air to the entire ice sheet and rain along the western coast.” About 10% of the ice sheet surface melted on April 11, the NSIDC found.

During the melt event, the NSIDC found, temperatures rose up to 29 degrees Fahrenheit, or 16 degrees Celsius, above average for this time of year.
Timing is everything

The last time an April melt event of similar magnitude happened was in 2012, which turned out to be the record melt season since satellite monitoring began in 1978.

Greenland Blocking Index with circles added to show spikes in the index during the April and June record heat events. Image: Polar Portal/DMI

Jason Box, a climate scientist who researches the Greenland ice melt, says the timing of these melt events is critical because they affect the reflectiveness, or albedo, of the ice sheet. As the ice melts the surface turns darker, which causes more incoming solar energy to be absorbed, thereby hastening more ice melt. This feedback loop is known as the “albedo feedback.”

“More and more I think ‘timing is everything,'” Box told Mashable in an email.

“This year, on the side of big melt is low accumulation along west Greenland. Low snow accumulation amount on bare ice means less snow to ‘burn off’ before much darker bare ice gets exposed,” Box said.

Biggest melt train may already have left the station

“Considering timing, the earlier strong melt episodes happen (see how 2012 has a stronger melt condition a week earlier than 2016), suggests the biggest melt train may already have left the station. Strong melt starting early will allow the albedo feedback to maximize the impact of more than normal heat,” he said.

Box pointed to an index of atmospheric conditions, known as the Greenland Blocking Index, that is tied to ice melt, since it helps measure how much mild air is flowing into west Greenland from the southwest.

Based on the average from 1981 to 2010, the index went into record territory in early April, but then has been quite variable since. 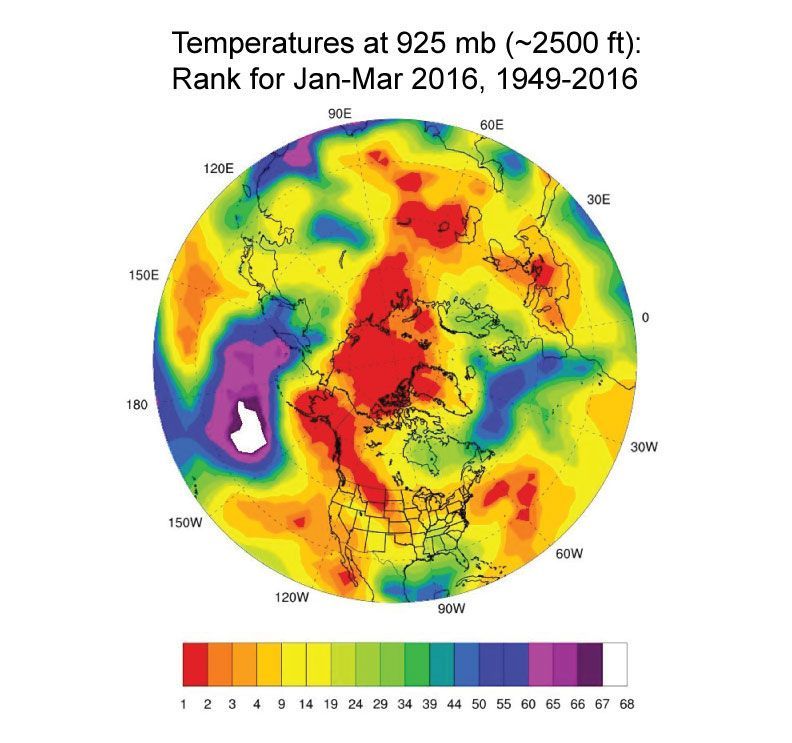 Blocking index has been increasing

A study published in the International Journal of Climatology in early May found that the blocking index has been increasing — signaling more warm air moving into Greenland — during the summer melt season, as well as during the height of the Arctic winter.

This past winter was the warmest on record for the Arctic region.

William Colgan, who studies glaciers and climate change at York University in Toronto, said although this melt season is so far running behind 2012’s record melt, the mild conditions nearly scuttled his field research plans that depended on landing a plane on an ice runway on the ice sheet.

“This spring was indeed unusually warm. When we arrived in [kangerlussuaq] on April 19, the snow was already melted and the river was flowing,” he said in an email. “Temperatures flirting with freezing point at Camp Raven (it was 15 C in Kanger!) fostered some discussion about landing C-130s in melting conditions. Fortunately it remained below freezing for our put-in, but only just.”

Whether Greenland ultimately sets a record for the 2016 melt season will largely depend on weather conditions during the rest of the melt season, which typically ends in September.

Until then, scientists like Box and Colgan, along with many others, will be warily watching conditions.