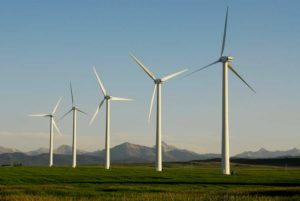 The main objective of the South African Grid Connected Wind Farm Programme is to contribute to the development and promotion of renewable energy in South Africa by building a framework to secure carbon revenue for wind farm developers.

As Eskom’s debt approaches a staggering R500bn and South Africa’s economy contracts, the urgency of a business model revamp for the utility could not be clearer. To address this, Greenpeace Africa commissioned a study, Eskom: A roadmap To Powering The Future, which provides a clear roadmap for the sinking utility’s reform and adaptation.

Key recommendations for Eskom’s reform include:

Implementing these recommendations would give Eskom an opportunity to stabilise its economic situation, reduce its debt and become a constructive promoter of the necessary transition of the electricity sector to renewable energy in South Africa.

“Eskom’s reform is almost laughably overdue; the utility is technically insolvent, inefficient, unable to guarantee security of supply, wildly unprepared for an energy transition to renewable energy and is the country’s biggest emitter of toxic pollutants and greenhouse gases, which are driving us towards a climate and pollution emergency,” said Happy Khambule, Greenpeace Africa’s Senior Political Advisor.

The report follows several international experiences and trends of phasing out coal, and unbundling and breaking up absolute monopolies in the electricity sector. It also proposes the introduction of an independent transmission operator to improve the security of electricity supply and provide fair access for new renewable power plants such as wind and solar.

“Now, the new administration needs to prove their credibility and that their pre-electoral promises about the reform of Eskom and the electricity sector were not merely cheap electioneering tactics. The decisions that need to be taken about Eskom’s future will not be easy, but it is the government’s responsibility to ensure that a bold shift to renewable energies, with Eskom as a public good at the centre, becomes a reality. If they do so, and create and implement a Just Transition framework, South Africa’s electricity sector can only flourish,” ended Khambule.

The overhauling of Eskom’s design and the restructuring of the electricity sector must be accompanied by at least two key elements: a coal phase-out law, which gradually but completely phases out coal-fired power generation by 2040, and a Just Transition process that engages all key stakeholders in a dialogue that should lead to a series of negotiations on a social compact. South Africa must prioritise the well-being of people living and working in the coal regions by ensuring the finalisation and implementation of a Just Transition plan.

More about the paper’s author

Born 1959 in North Rhine Westphalia, Germany, Prof. Dr. Uwe Leprich finished his Ph.D. in Economics at the University of Bielefeld in 1993. In 1995 he was appointed to a professorship at the business school of the University of Applied Sciences in Saarbruecken where he teaches economics, economic policy and energy policy. In 1998/99 he co-founded the Institute for Future Energy Systems (IZES), a university based research institute focussing on renewable energies, energy efficiency and decentralised power generation, where he served from 2008 till 2016 as a scientific director. In April 2016 he switched to the German Environment Agency where he served as the head of the department of Climate Protection and Energy for two years. His fields of specialisation embrace economic and ecological regulations of utilities in monopoly and liberalised energy markets as well as environmental instruments for electricity markets. He is author and co-author of several books and articles about incentive regulation in electricity markets, feed-in law regulations and instruments for promoting renewable energies in the heat market.

He was an expert member of the Enquete commission “Sustainable energy supply” of the 14th German Bundestag in 2001/02, and since January 2010 he is an Alternate Member of the Administrative Board of the Agency for the Cooperation of Energy Regulators (ACER) of the European Union.