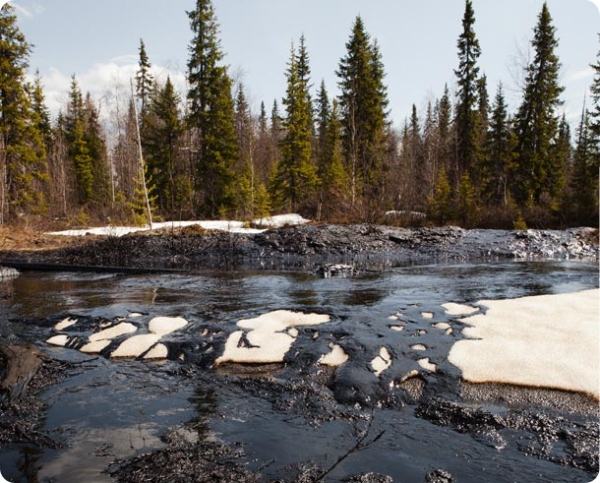 Shedding light on a forgotten oil spill disaster in Russia, Greenpeace International has released a multimedia package documenting the impact of the pollution, warning of the potential of a similar disaster in the Arctic Ocean.

Greenpeace offices have visited the remote Komi Republic in Russia on several occasions to investigate and document the situation. The footage and photos taken are clear evidence of the destructive nature of Russia’s oil industry, which is now greedily looking to drill for oil in the Arctic Ocean.

Besides video footage of the polluted landscape, the multimedia package includes a series of photo portraits of Indigenous inhabitants, accompanied by eyewitness accounts of the impact of the oil extraction.

“The Russian oil industry’s reckless pursuit of oil has destroyed a landscape and has had a devastating impact on the region’s Indigenous inhabitants. Food and water are now contaminated by oil residues, posing serious risks to public health,” said Zhenya Belyakova, Arctic campaign coordinator at Greenpeace Russia. “This is totally unacceptable.”

Ongoing oil spills on land in Russia are leading to the discharge of up to 500,000 tonnes of oil into the Arctic Ocean every year via the country’s river systems. This can endanger marine life in the Arctic and destroy vast habitat areas important for the region’s wildlife.

Greenpeace launched a campaign to save the Arctic in June and is calling for a ban on offshore oil drilling in the Arctic. In doing so, they hope to help protect the region from oil majors Gazprom and Shell, both of which are looking to tap the region’s oil reserves.

If Russia’s oil industry can’t even prevent and clean oil pollution on land, it must not be allowed to drill for oil offshore in the Arctic, where the build-up of ice, extreme weather and the remoteness of the region greatly add to the risk of an oil spill.