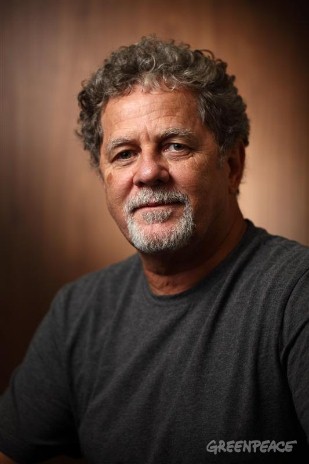 Greenpeace Brazil’s Amazon Campaign Director Paulo Adario was recently honoured by the United Nations as a ‘Forest Hero’ at a ceremony in New York in celebration of his work in defense of the Amazon Rainforest.

Adario received the Forest Hero award from the UN on the 9th of February in recognition and celebration of the unsung heroes fighting destruction of the world’s forests as The UN Year of the Forests draws to a close.

“I am delighted to accept this award in the name all the people fighting daily to protect the forest they made their home, and in recognition of the important work carried out not just by Greenpeace, but by all those striving to defend the Amazon and other forests around the world,” said Adario.

“It’s also a clear message from the United Nations about the crises faced by our forests, and how their preservation is vital to maintaining the balance of our planet as well as preventing the threats to our future from climate change.”

“The destruction of our forests, marked by violence against indigenous peoples and traditional communities, is responsible for the accelerated loss of biodiversity and the greenhouse gas emissions that cause global warming. In recent decades, Amazon deforestation has made Brazil the world’s fifth biggest climate polluter. Rainforest conservation is the fastest, cheapest and smartest way to tackle the climate crisis we have today,” he continued.

“Internationally, Brazil is selling itself as a defender of the Amazon; in practice, several new measures threaten to undermine the protection of the forests of Brazil. President Dilma’s government is reducing protected areas, large infrastructure projects are destroying the region and Dilma is absent from discussions that will weaken the Forest Code, and are being pushed ahead by the agribusiness lobby in National Congress”.

The list of candidates for the Forest Hero prize included nominees from 41 countries including Africa, Europe, North America, Asia and Latin America. The UN however chose 5 ‘heroes’, one from each continent, naming Adario the Forest Hero for Latin America and the Caribbean at a ceremony.

For more than 15 years, Adario has fearlessly led a team that has worked from deep inside the Amazon rainforest, the halls of Brazil’s Congress and the boardrooms of multinational corporations to defend the Amazon. Among their accomplishments are the moratorium on international trading of Brazilian mahogany, the demarcation of their land by the Deni people, the creation of protected areas by Brazil, the Soya moratorium and the cattle industry agreement in the Amazon – all of which are still in place today.

This award comes as Greenpeace celebrates its 20th anniversary in Brazil and just weeks before the flagship Rainbow Warrior embarks on a tour through the Amazon to highlight the risks facing the Amazon and its people today.

Greenpeace is an independent global campaigning organisation that acts to change attitudes and behaviour, to protect and conserve the environment, and to promote peace. Greenpeace is promoting a policy of zero-deforestation in Brazil.