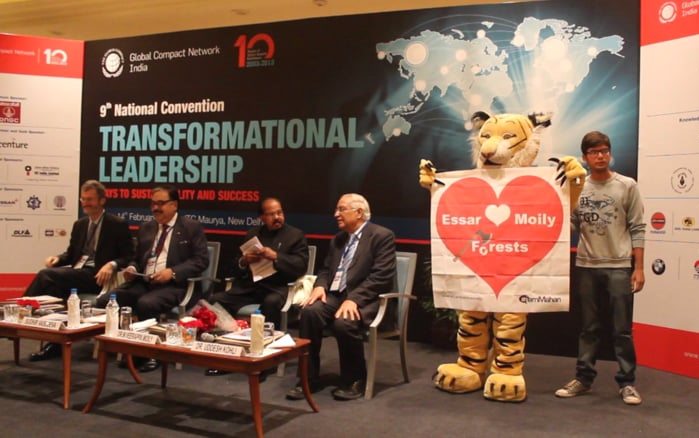 “Since his appointment late last year, the minister, who also holds the petroleum and natural gas portfolio has been blatantly granting clearances to big ticket projects with no regard to the impact they would have on the environment or on communities that stand to lose their livelihoods,” claimed Greenpeace.

Expressing anguish over the Mahan coal bock clearance, Greenpeace campaigner Arpana Udupa said, “We are here because we do not accept Mr. Moily’s speedy clearances, which bow down to demands of corporates like Essar.

“Granting stage II clearance to Mahan coal block is a blatant violation of the Forest Rights Act and we will continue to stand with the people whose livelihoods would be ruined by this project, to defend their rights.”

The in-principal Stage I clearance was granted to Mahan coal block in 2012 with 36 conditions, which included implementation of Forest Rights Act (FRA). 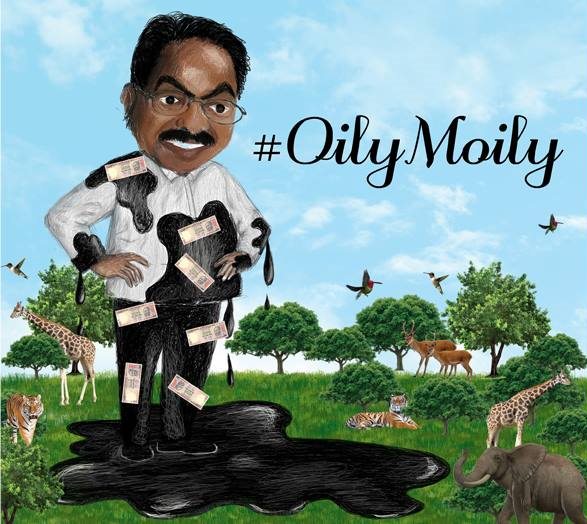 This involved holding free and fair gram sabhas in villages that would then decide on whether they want a mine or not.

In March 2013, a special gram sabha on FRA was conducted in Amelia village in Mahan region, which villagers say was, fraudulent.

“Though 184 people attended the gram sabha, the resolution has 1,125, signatures – villagers fear that most of them have been forged. Seven of the signatories have been dead for three years,” said Greenpeace.

“In June last year, Union Minister of Tribal Affairs, Mr K.C. Deo, had written to the chief minister of Madhya Pradesh regarding the FRA violations in Mahan, but his protest has been conveniently ignored. Even Moily’s predecessors Jairam Ramesh1 and Jayanthi Natrajan2 had opposed the clearance given to Mahan coal block,” said the environmental organization.

On January 22, Greenpeace activists draped Essar’s 21-storey building with a banner that announced to the world how Essar’s activities threaten forests. 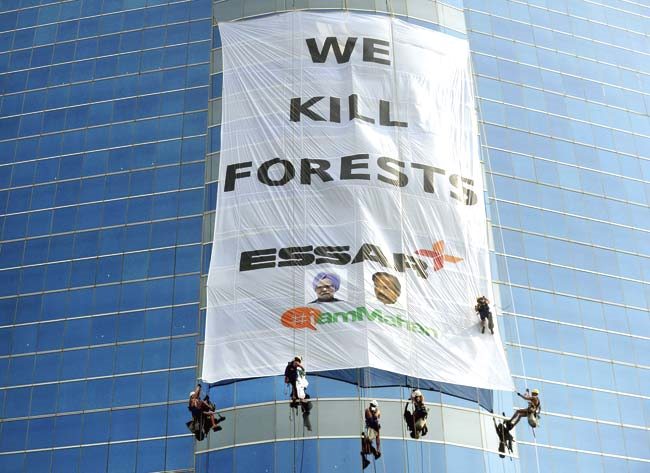 Not only was Greenpeace slapped with a Rs 500 crore defamation suit, Essar also moved an injunction in Mumbai High Court demanding that Greenpeace should stop demanding Veerappa Moily’s resignation from all its communication.

“The latter plea was thankfully rejected by the court. Does this indicate a love affair between the minister and Essar?” asked Greenpeace.

“Moily’s romance with Essar dates back to his days in the Law and Corporate Affairs ministries. Late last year Moily slammed bureaucrats for recommending termination of the inordinately delayed Essar Oil’s Ratna oilfields contract and transferring it to state run ONGC,” said Greenpeace.

“He refused to act against Essar with the argument that it would damage investor sentiment.

“Moily’s reluctance to properly investigate Essar’s relationship with Loop telecom during his stint at the Corporate Affairs ministry is another example of this soft corner for them. Essar has been charged by CBI for using Loop Telecom as its front company to garner precious 2G spectrum by circumventing law,” alleged the organization.

“The flavour of the season is the love affair currently going on between Mr Moily and Essar. It is evident in the fact that Essar announced granting of stage II clearance even before the announcement was made by the Ministry of Forest and Environment. The company has also been trying to protect its Valentine – Mr Moily, seeking an injunction to prevent Greenpeace from asking for Mr. Moily’s resignation,” says Udupa.

In an open letter to Moily last month, Greenpeace had demanded his resignation.

Earlier this month, over 200 members of environmental organisations and rights groups wrote to the prime minister, asking him to sack Moily as his actions go against the mandate of the environment ministry.

Greenpeace demands that the minister should roll back Mahan’s stage II clearance with immediate effect or resign.

“Mr Moily is unashamedly ignoring his duty to protect the environment or the forest dwellers with an eye on the coming elections. Therefore, he is unfit to hold the position in the ministry and he should immediately resign. If Mr Moily and his government continue with their blind love for corporates like Essar, then they should get prepared to taste the ire of the people of this country in the coming elections,” says Udupa.