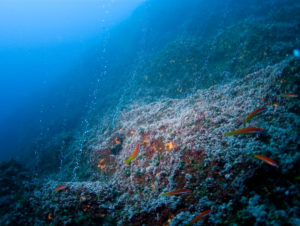 Hydrothermal vents at Dom João De Castro. They are unusually shallow and support unique communities of organisms, often with special properties which interest both scientists and industry. UAC is conducting research here. The area has been designated a Natura 2000 site. Greenpeace is in the Azores with a team of scientists to survey and document deep sea life. See more photos here.

The world’s oceans could face severe and irreversible harm unless tighter environmental safeguards are put in place to protect them from the risks of deep sea mining, warns Greenpeace report In Deep Water.

Shining a light on this emerging threat, the report reveals that the deep sea mining industry is aware that their activities could result in the extinction of unique species and calls on governments to agree on a strong Global Ocean Treaty at the United Nations that puts conservation, not exploitation, at the heart of ocean governance.

“The health of our oceans is closely linked to our own survival. Unless we act now to protect them, deep sea mining could have devastating consequences for marine life and humankind,” said Louisa Casson, of Greenpeace’s Protect the Oceans campaign.

“The deep sea is the largest ecosystem on the planet and home to unique creatures that we barely understand. This greedy industry could destroy wonders of the deep ocean before we even have a chance to study them.” 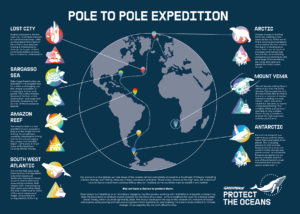 To date, around only 0.0001% of the deep seafloor has been explored or sampled by scientists.

The Greenpeace report cites scientists, governments, environmentalists and representatives of the fishing industry, who warn of the inevitable threats to marine life across vast areas of the world’s oceans from mining machinery and toxic pollution if governments allow deep sea mining to begin. The report also explains how deep sea mining could make the climate emergency worse by disrupting ‘blue carbon’ stores in seafloor sediments.

“Deep sea mining would cause inevitable and irreversible harm to biodiversity, including the extinction of some species found nowhere else on the planet. The global climate crisis means that we don’t have the luxury of ignoring dire warnings. The deep sea locks away carbon absorbed from the atmosphere and helps limit and slow climate breakdown. The risks of disturbing its ability to store carbon are too real to be ignored,” said Melita Steele, Senior Climate and Energy Campaign Manager for Greenpeace Africa.

Although commercial deep sea mining has not yet begun, 29 exploration licenses have been granted to countries including China, Korea, the UK, France, Germany and Russia, who have laid claim to vast areas of the Pacific, Atlantic and Indian Oceans, covering an area of around 1 million km2 – almost two times the surface area of Spain. The American weapons giant Lockheed Martin’s subsidiary has two exploration licenses sponsored by the UK.

“It is critical that governments agree on a UN treaty strong enough to pave the way for the creation of a network of ocean sanctuaries that will be off-limits to all forms of industrial exploitation, including deep sea mining. It also needs to enforce much higher environmental standards for any such activity outside of these sanctuaries,” said Louisa Casson.

The Greenpeace ship Esperanza is en route to the mid-Atlantic, where it will conduct new research at the Lost City, a spectacular formation of actively venting hydrothermal chimneys which tower above the seafloor and may hold clues to the evolution of life. Despite being identified by UNESCO as meeting World Heritage status, the Lost City is under threat after it was included in an area of the Mid-Atlantic Ridge covered by a deep-sea mining exploration contract granted by the ISA to the Polish government in February 2018.