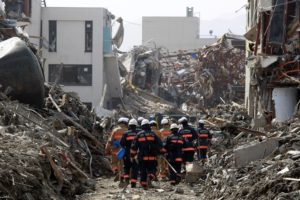 Reacting to reports that radioactive materials including the isotope Cesium-137 have been released from the Fukushima power plant, and that increased levels of radiation have been detected in the immediate vicinity, Jan Beranek, Head of Greenpeace International Nuclear Campaign said:

“Our thoughts continue to be with the Japanese people as they face the threat of a nuclear disaster, following already devastating earthquake and tsunami. The authorities must focus on keeping people safe, and avoiding any further releases of radioactivity”.

“The evolving situation at Fukushima remains far from clear, but what we do know is that contamination from the release of Cesium-137 poses a significant health risk to anyone exposed. Cesium-137 has been one if the isotopes causing the greatest health impacts following the Chernobyl disaster, because it can remain in the environment and food chain for 300 years.”

“Fukushima remains under threat of a serious reactor meltdown; this would potentially create an iodine cloud, which could spread high radiation levels to both the environment and population over many tens of kilometres. By simply communicating to local populations the importance of staying indoors, the government could limit potential radiation doses from this cloud by a factor 2 to 5.”

“How many more warnings do we before we finally grasp that nuclear reactors are inherently hazardous? The nuclear industry always tells us that situation like this cannot happen with modern reactors, yet Japan is currently in the middle of a potentially devastating nuclear crisis. Once again, we are reminded of the inherent risks of nuclear power, which will always be vulnerable to the potentially deadly combination of human error, design failure and natural disaster.”

“Greenpeace is calling for the phase out of existing reactors, and no construction of new commercial nuclear reactors. Governments should invest in renewable energy resources that are not only environmentally sound but also affordable and reliable”.