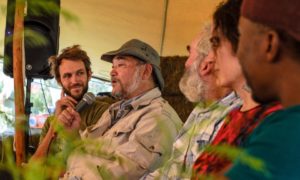 Greenpop, a tree planting organisation based in Cape Town, held their annual Eden Festival of Action where 5000 trees were planted over the past three weeks. As a means of reforestation after the 2017 wildfires, the trees were planted in venues including the Garden Route Botanical Garden, Heartland School of Self Sufficiency and the Harkerville Honeybush Project, among many others. Along with the reforestation, a host of workshops were held ranging from ecology, permaculture and mycology to wholesome, mindful living, conscious dance and interspecies communication. Greenpop invited Liu to be their guest speaker, and on Thursday he held a presentation where he spoke about his work in the Loess Plateau in China and an upcoming project in the Sinai Peninsula.

Liu saw the vast Loess Plateau in central China, an area more or less the size of France, turn from an arid desert into a massively productive food forest. This was done through means of integrated soil restoration, planned water retention methods and ultimately kickstarting the former hydrological cycles that once made the Loess Plateau the fertile land that was the start of Chinese agriculture and ultimately, Chinese civilisation. He made a documentary about the work there called “Green Gold”, which reached international acclaim.

The day before his talk at the Eden Festival of Action, he was in final negotiations with the Egyptian government about a proposed reforestation of the Sinai Peninsula. Situated in the heart of the Fertile Crescent, what was once known as the Land of Milk and Honey, the Sinai is now a desert and has been experiencing political and social turmoil for decades. Liu, along with the Weather Makers from the Netherlands and a number of other institutions and governmental bodies, made this proposition to re-green the area and restore it to its former pristine state. As fortune would have it, not only did the Egyptian authorities accept the proposal but actively asked for a 50 year roll out plan! This certainly set the tone for an optimistic environment at Wild Spirit.

The panel discussion revolved around a series of ecological questions, what the future on our shared planet holds, how to get real change implemented and what we as individuals and as a collective can do every day.

With the deep, global environmental crisis we are facing as humanity, Liu made it clear that “productivity is dependent on ecological wellbeing” and went on to illustrate that “the consequence for the child of the wealthy is the same as the consequence for the rest of our children”. The panel spoke on how the transactional economy is a real issue facing our future.

This sentiment was echoed profoundly by Wigley. When asked about our need to regenerate the Earth systems and how to do it, he chuckled and made it plain that “what does work if we allow nature to move forward”, saying we need to “undermine the system, grow our own food – it’s really as simple as that”. Sokomani made the call to action saying it is crucial that we “convert the majority of South Africans to fight the same fight”.

Liu concluded, saying “what I love about Greenpop is that it looks like an ecological restoration camp”, a key part of his philosophy that will lead to long term positive transformation. The event went well over the allocated time but was pervaded by abundant laughter, audience participation, probing questions and a heartfelt atmosphere. Be sure to make it to next year’s festival. 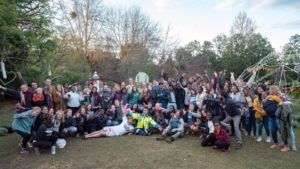