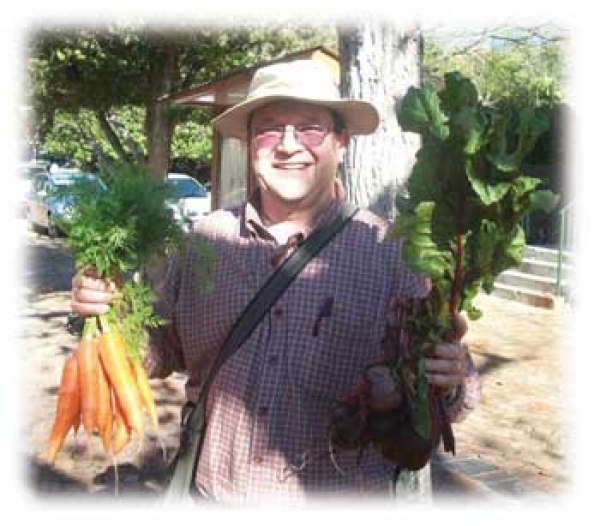 There are markets … and markets

New-age markets, farmers markets, slow food markets, and true organic markets. The one at the Constantia Waldorf School is among the latter. It’s small – there were only seven stalls on the morning I went. But it is the real thing. Most of the activity revolved around the fruit and vegetable stall; in fact, the produce didn’t even have a chance to get as far as the table top, but was still in bags and baskets on the ground.

Shoppers got stuck in from there, choosing their greens avidly. Produce is sourced from a variety of places, mostly nearby but also afar. Soil for Life, located on the school grounds, supplies produce from their own garden as well as from self-sufficiency programmes in Langa. The rest comes from the West Coast, as well as from Citrusdal, Riviersonderend, and Montague among others. Camphill farm, known for its dairy and bakery products, as well as biodynamic vegetables and herbs, was represented too.

I enjoyed the market mainly because fruit and vegetables formed the cornerstone of the trade, and all of it is organically or biodynamically grown. This isn’t an Indian head massage and designer food fair. The market has been going for 18 months and is held come rain or shine. There is dedication to growing it long term, and to keeping it organic. Its location on the Waldorf School grounds gives a community context and an attractive safe setting. The market operates on the old principle of tithing – 10% of the proceeds are given to the host.

There were some interesting additional stalls. Heather was selling a range of home-made Kids Bites – finger foods made from 100% organic ingredients (meat, fish and vegetable/legume balls). These can go in lunch boxes or form the basis for quick healthy meals. She sells them frozen in packs, so all busy parents have to do is to thaw and cook them for their kids, or for themselves too! The sample I tried was delicious. Eastlynne had a glowing table-full of products made from organic lemons. The best for me were a hot winter drink made from lemons, lemon verbena and lemon balm; and an exquisite lemon curd.

A smile as broad as his sunhat

The person driving the Constantia Organic Market is Roger Oxlee, with a smile as broad as his sunhat. In the 1980s and 90s he helped to pioneer the well-known Bryanston market at Michael Mount School, so he has the experience and stamina to take this market from scratch to realisation. His enthusiasm was palpable. When I said goodbye he searched quickly for something to give me as a gesture – a beautiful red apple was found, sweet and crisp, which I ate on the way home. The market is held every Friday from 11h30 to 15h00 on the paved area under the oaks at the Constantia Waldorf School.