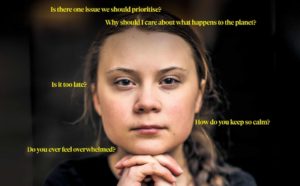 Greta Thunberg. This time last year she was unimaginable. Then, pretty much from nowhere, there she was: small and slight, a girl just turned 16, the way-too-young odd person out on a panel of adults sitting in front of the world’s economic powers at Davos last January. Unshowy and serious, careful, firm, she said it: Our house is on fire.

The ancient Greeks had a word for this: parrhesiastes. It means a person who speaks truth to power: you should not be behaving in this way. Don’t. More specifically it suggests someone in whom directness of expression and access to truth coincide; and it means someone of very little power who’s risking everything – because they can’t not, there’s no option – to speak ethical truth to powers so entrenched that they’re close to tyrannical, because telling this truth is about moral law.

“Some people, some companies, some decision-makers in particular know exactly what priceless values they have been sacrificing to continue to make unimaginable amounts of money, and I think many of you here today,” she said to the World Economic Forum conference, “belong to that group of people.”

Earlier this month Opec declared Thunberg, and with her the other young climate activists, the “greatest threat” to the fossil fuel industry. Thunberg tweeted them her thanks. “Our biggest compliment yet.” Hers is a voice totally unlike the world’s usual power-cacophony: clean, simple, inclusive, the voice of someone refusing to beguile. She talks ethics to politics without flinching. She cuts through the media white noise and political rabble-rousing to get to the essentials. This is a communal voice and Thunberg is its lightning conductor, and no wonder: when you hear her speak or you read her speeches you know you’re in the presence of the opposite of cynicism – of a spirit, in fact, that rebuffs cynicism and knows that the way we act, every single one of us, has transformatory impact and consequence. “The real power belongs to the people.”