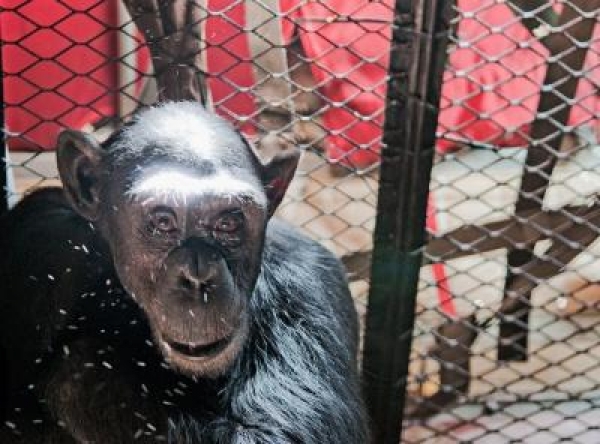 Chimpanzees, the animals most similar to humans are severely abused in some parts of Africa. In October 2010 the Central Africa Expeditionary Force (as they were known as) set out on a mission to Central African Republic (CAR) to relocate four chimpanzees to the Chimp Eden Sanctuary in Nelspruit as part of the All Afrika Expedition.

The Jane Goodall Institute (founded by primatologist Jane Goodall) is a global organisation that empowers people to make a difference for all living things. In South Africa, the JGI SA Chimpanzee Sanctuary is home to chimpanzees that have been misplaced from their natural habitats in Central Africa. This tranquil sanctuary is committed to the rescue, rehabilitation and care of Chimpanzees in need of refuge and brings the world of chimpanzees closer to humanity through education and tourism.

‘To protect chimpanzees from extinction we must address the root causes of numerous threats, including habitat loss, the illegal bushmeat and exotic pet trades, armed conflict, and infectious disease. But we also face an immediate crisis; the continual growth in the number of ‘bushmeat orphans.’ Commercial bushmeat hunters kill many chimpanzees every year. Infants, too small to be killed for meat, are often put on the black market for sale as pets or entertainers,’ says Jane Goodall.

May the Force be with you

The Central Expeditionary Force consisted out of South African photographer David Devo Oosthuizen, The Jane Goodall Institute South Africa, the South African Air Force and a group of passionate eco-adventurers. They met up with world famous traveller Kingsley Holgate, who helped deliver fresh supplies with the United Against Malaria team as part of the All Afrika Expedition. The expedition was aimed at spreading awareness of the dangers and prevention methods about Malaria throughout Africa. Holgate is a Fellow of the Royal Geographic Society and has completed a number of successful humanitarian expeditions on the African continent.

The Force was split into two separate teams, the advanced team who left ten days prior to the other team, known as the back-up team. The advanced team had to locate and rescue the chimpanzees, do all necessary blood tests and send the samples to Holland for testing (for diseases such as Simian AIDS) to get the vital clearance permits and paperwork. The back-up team would then bring fresh supplies and malaria nets to Bangui, where the chimps were kept safely, and relocate them with the help of the South African Air Force.

Claude, a 7 year old male was quickly located in the Bangui Zoo grounds. Claude was orphaned when his mother was killed for the bush meat trade. He lived in poor conditions with another male that eventually was stabbed to death when he tried to escape. Adult male chimps are strong and large and very dangerous. After the team took Claude’s blood sample they moved onto the location of Tubo and Babush. (They were initially looking for a chimp called Roo as well, but he couldn’t be found).

They found that the 3-year old male and female were moved to Bangui because they contracted flu, but only after they travelled about 100km after them first. Chimpanzees get the same illnesses as humans. Tubo and Babush were found tied to a fence with a short lead. They had been kept at Bohali Falls Hotel as a tourist attraction.

‘This is a tragically common practice and the fate of these chimps is always the same. They grow up, become too large, the owners become frightened of them, and they are abandoned or killed. Chimps are not pets!’

The Force was running out of time to get the blood samples to Holland, partly because the owner had changed her mind of letting the chimps go and partly because of administrative obstacles.

‘After some intense negotiations a very tough decision was taken to only send the blood sample for Claude, but to vow to return for Tubo and Babush as soon as possible.’ 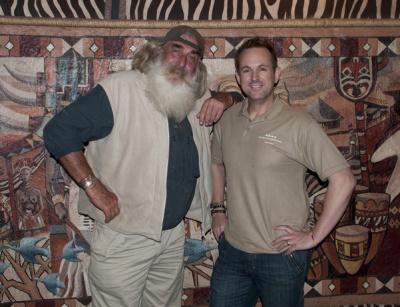 ‘After what seemed like an eternity the blood test result for Claude came back with the best news possible. Claude was clear of all diseases and ready to relocated back to Nelspruit,’ says Oosthuizen. ‘On Monday morning, 29 November 2010 the back-up team departed led by myself and Chris Thorpe (United Against Malaria).’

After a 9-hour flight they landed in a hot Bangui with Kinsley and Mashozi Holgate cheering them on beside the runway.

They split into two teams. Thorpe and Kingsley and a majority of the members went to hand out malaria nets, while Oosthuizen and the rest went to fetch Claude and the advanced team.

‘It was a magical moment for me to finally look into Claude’s eye, to know that he can be saved and that it is all going to be fine.’

It was hard to coax Claude into the transport cage, an even smaller cage than the prison he was used to, so the team managed to make a plan with the cage he was in at that moment.

On the morning of 1 December 2010 the team left on a smooth flight relocating Claude in Nelspruit.

‘Emotions ran high as we finally lifted Claude out of the plane and placed him on the sanctuary bakkie for the last few kilometres home.’

Chimpanzees must go through a mandatory 90-day quarantine process before they can be integrated into a local family unit. Claude was finally safe and ready to turn a new page in his life with The Jane Goodall Institute.

The JGI’s conservation strategy includes an ambitious goal: introducing orphaned chimps back into the wild. A generous grant from the U.S. Fish & Wildlife Service is helping JGI staff to conduct a biodiversity survey and other assessments to find a site suitable for chimpanzee reintroduction into the wild. For Jane Goodall, a successful reintroduction program would be a dream come true.

The JGI SA Sanctuary chimps will probably never be released into the wild but they all have a much better ‘wild’ life than they did in zoos, as pets and exhibition animals.

Claude was finally moved to his new family unit at the institute on Saturday, 5 March 2011. According to Oosthuizen it was a day to remember, filled with emotion. Claude had to be gradually introduced to this new family.

‘You can only imagine what Claude is thinking seeing other Chimpanzees up close for the first time since being orphaned by the Bushmeat Trade.’

Claude instinctively started to display the correct subordinate gestures, after appearing a bit overwhelmed at the new faces. Claudine, who was also rescued from the Central African Republic, was the first to interact. Claude has slowly but surely been prepared for being set free into the forest enclosure at the institute. The Force has been very happy with his progress.

‘This has been the most amazing, yet challenging, dangerous and rewarding mission ever! We fought our way through corruption, crowds, forests, armies, rebels, mosquitoes, closed airports, closed roads, red tape, bush meat and many more, but we have Claude safe now and we have made a difference,’ says Oosthuizen. The Force is still organising to go back to CAR for Tubo and Babush.