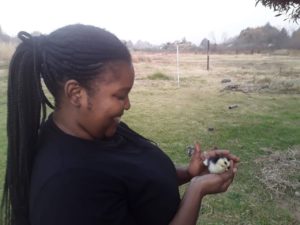 Seeing the success of her work she quickly expanded and founded Nanloy Organic Farm on two hectares, farming spinach, red amaranth (imbuya/thepe) and okra, as well as a family-owned site in Limpopo focusing on indigenous crops such as cowpeas (izindumba/ dinawa), indigenous pumpkin, sorghum, inkakha and ibeche.

She has quickly gained a prominent profile in the agricultural space and credits her mentor Siphiwe Sithole of African Marmalade for enabling her to avoid some of the common pitfalls of a new agricultural business. 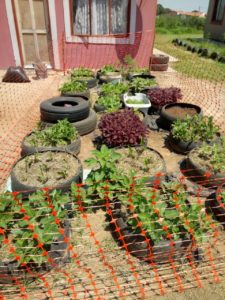 Since her first garden at her grandmother’s, Nandi has been exploring how plants and animals can benefit one another on her farm. She has chickens for egg production and adds the chicken manure to her compost heap to increase nitrogen, potassium and phosphorus into her beds. She’s additionally found that utilizing eggshells in the compost has assisted in reducing cutworms.

She mixes the chicken manure with one part green material (fresh leaves, fresh grass cuttings) and two parts brown material (dead leaves and untreated sawdust from a neighbouring furniture maker). She dampens the heap and ensures that it reaches at least 60°C allowing it to cure for over 2.5 to 3 months, depending on the season. She discovered that by excluding additional organic material such as food scraps the heap cures quicker.

Some of her crops, such as spanspek (cantaloupe/sweet melon), pumpkins and tomatoes require “heavy feeding” and she adds an additional layer of compost one month after planting. With leafy greens such as spinach, she adds a dressing monthly. However, for her root vegetables such as carrots, potatoes, beetroot and sweet potatoes, she does not add any additional composting. 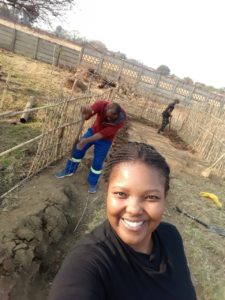 When composting new beds she lets the chickens into the garden to scratch and removes any grubs such as June Bugs and Japanese Beetles within the compost before mixing it into the soil.

Beyond her farm, Nandi is passionate about changing the narrative around poverty alleviation and food security by bridging the gap in the accessibility of nutritious organic produce. She’s additionally founded the Ayanda Organic Gardens programme to empower her community by promoting self-sufficiency, healthy eating and pride in African indigenous crops.

She strongly believes farmers should be engaged with their communities and as an EOA Pollinator, she will be forming a new Participatory Guarantee System (PGS) group in Benoni with fellow farmers. 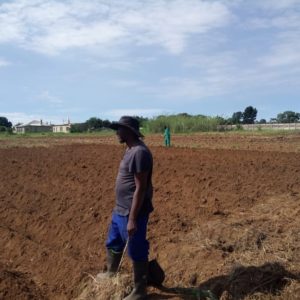 The Pollinator Programme is coordinated by PGS-SA together with SAOSO, training 20 farmers across South Africa (and Lesotho) to establish PGS groups, a peer review and knowledge sharing process for the quality assurance of organic produce.

PGS-SA is launching the initiative with support from the Knowledge Hub for Organic Agriculture in Southern Africa (KH SA). KH SA is a collaborative country-led partnership funded by the German Federal Ministry of Economic Cooperation and Development (BMZ) and implemented by the Deutsche Gesellschaft für Internationale Zusammenarbeit (GIZ) GmbH.