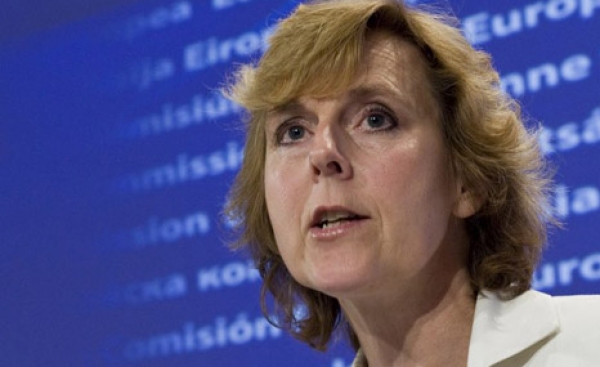 EU Climate Commissioner Connie Hedegaard says Barack Obama’s State of the Union pledge to tackle climate change is a sign that science not ideology will guide his second term.

In his annual address to Congress, Obama said he was prepared to take “executive action” to reduce pollution and speed the transition to “more sustainable sources of energy.” And he warned the listening legislators that he would move regardless of whether they agreed with him: “If Congress won’t act soon to protect future generations, I will,” he said.

In response Hedegaard tweeted: “Congratulations America: finally it seems that science is coming back as a reference point in American politics.”

She added: “No more blaming on slow action from China. New take from Obama: ‘As long as China keeps going on all-in on clean energy, so must we.’

The EU climate chief also welcomed the US President’s commitment to increase spending on Research and Development in the transport sector – using oil and gas revenues to fund developments in electric and hybrid vehicles.

Hedegaard has led EU efforts to impose stricter efficiency standards on EU car manufacturers, in the face of intense – but often hidden – opposition.

She tweeted: “Note to EU carmakers #SOTU: oil & gas money ‘will drive new research & technology to shift our cars & trucks off oil for good’ Quite a vision!”

UN climate chief Christiana Figueres, who in the past has been a vocal critic of US blocking tactics at international negotiations, also highlighted Obama’s commitment to a “bi-partisan market-based solution” in what she described as a “strong statement” on climate change.

Other observers are less impressed with Obama’s vision for a clean energy revolution in the USA.

US emissions fell 13% between 2007 and 2012 – but a recent report from the World Resources Institute highlighted the country will not currently achieve its aim to reduce 2020 emissions 17% on 2005 levels.

The replacement of coal by shale gas as a fuel for power stations is credited with cutting US emissions, and Obama said he will continue to back growth in this area: “The natural gas boom has led to cleaner power and greater energy independence,” he said. “We need to encourage that. That’s why my administration will keep cutting red tape and speeding up new oil and gas permits.”

Karen Orenstein from Friends of the Earth US told RTCC the focus on oil and gas exploration was in direct conflict with his message on the climate – suggesting that his decision over the pipeline carrying oil from the Canada tar sands to the Gulf Coast will be a true test.

“While the message was mixed, there will be clarity soon. We’ll see whether or not President Obama is indeed serious about addressing the climate crisis by his choice on the Keystone XL Pipeline,” she said.

“He must reject the pipeline if his words in tonight’s address are to be worth more than the paper on which they’re written.”

Alden Meyer from the Union of Concerned Scientists in the USA said this was a ‘strong message’ but warned elements within Congress would work hard to stop any new legislation.

“The president has the authority to regulate carbon emissions from power plants, and tonight he made clear he intends to use it,” he said. “There’s a lot of work ahead to make sure the administration proposes a strong rule, and that efforts to challenge it by opponents in Congress are blocked. But this was a strong message from the president tonight.”

In a sign of troubles to come, Senator Marco Rubio led the official Republican response with a call for Obama to further relax oil and gas exploration laws.

“One of the best ways to encourage growth is through our energy industry. Of course solar and wind energy should be a part of our energy portfolio,” he said.

“And let’s reform our energy regulations so that they’re reasonable and based on common sense. If we can grow our energy industry, it will make us energy independent, it will create middle class jobs and it will help bring manufacturing back from places like China.”

Rubio added: “When we point out that no matter how many job-killing laws we pass, our government can’t control the weather – he accuses us of wanting dirty water and dirty air.”