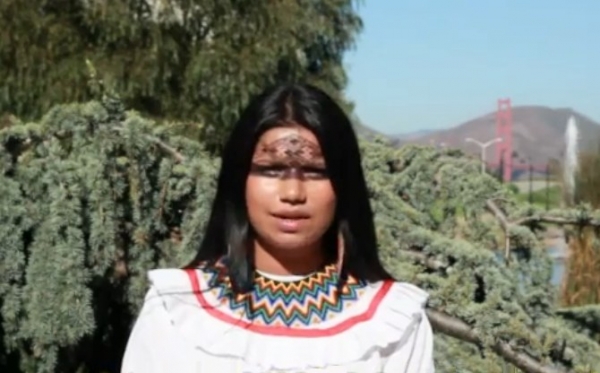 “We have come here to tell the government and companies that these lands are not for sale.”– Jaime Vargas, President of the Achuar Nationality of Ecuador.

Jaime and Narcisa traveled from the Ecuadorian Amazon to Houston recently on a mission… to challenge the Ecuadorian government face-to-face during its 11th Round oil concessions promotional roadshow at the North America Prospect Expo (NAPE), currently unfolding in Houston. Please take action today to support their mission.

The Ecuadorian government is hell-bent on plowing forward with plans to auction off the southern Amazon for oil development of an area that includes nearly ten million acres of primary forest and the ancestral lands of seven indigenous tribes.

But Jaime and Narcisa won’t have it. They’re in Houston on behalf of thousands of indigenous peoples in the Amazon calling on the Ecuadorian government to stop chopping up their rainforest home into oil blocks that will destroy the rainforest and threatens their cultural survival. And the government is doing everything they can here in Houston to keep their voices from reaching investors and potentially bidding companies. But their message is getting out loud and clear. Indigenous leaders and human rights groups from around the world are joining them in solidarity. Won’t you?

This is a critical struggle and it’s going to take us all to defend the Amazon from irreversible destruction. Please join us in convincing the Ecuadorian government that the devastating long-term effects of plans to exploit the oil buried deep beneath these ancient rainforest homelands are not worth the short-term economic benefit to Ecuador.

For indigenous rights and the rights of nature,