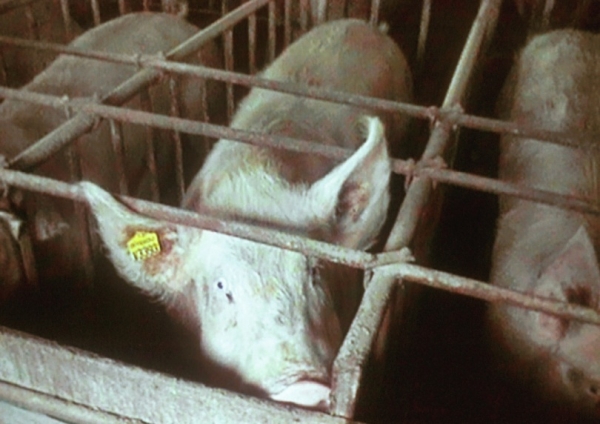 Pregnant sows all over the world are being given the right at last to use the legs they were born with! Now 60 000 pregnant sows in South Africa need your voice to help them gain their freedom too.

On 1st January 2013, keeping pregnant pigs in stalls/crates longer than the first four weeks of pregnancy, was banned throughout the European Union.

This means that pregnant sows in the EU will have the chance, at last, to trot around instead of being confined in metal cages which, for the last 50 years, have prevented them from moving forwards, backwards or sideways.

Sow stalls are already banned in the UK and Sweden and are being phased out in Tasmania, NewZealand and Australia.

Compassion in World Farming (South Africa) needs your voice for the 60 000 pregnant sows still confined in stalls in South Africa! These are the breeding sows – the ones that provide the piglets used for ham and bacon. See the torment of their confinement in this video clip taken on the Wine Route in the Western Cape:

The South African Pork Producers’ Organisation (SAPPO) wants 2020 to be the deadline for a  phase-out of sow stalls in this country.

Compassion in World Farming (South Africa) suggests that with your help, we can open the stall gates much faster than that!

doing better than ever

According to the latest issue of Farmer’s Weekly (4 – 11 January 2013, pages 54, 55 and 56), farmers who are now keeping their sows in small groups on deep litter, instead of in stalls, report that:

Please congratulate farmers Rob and Ian Butt who feature in the Farmer’s Weekly article and who have shown that it can be done! Their email address is: buttfarming@bundunet.com

If you eat pork, please ask your supermarket to be in touch with the Butt brothers to source higher-welfare pork.