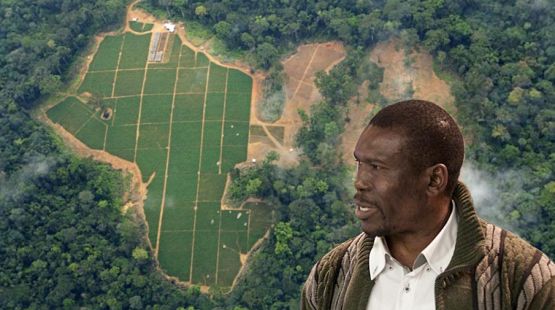 Thanks to Nasako Besingi and others, Herakles Farms has only been able to clear a few hectares of rainforest so far. Image: Greenpeace / Alex Yallop

Environmentalist Nasako Besingi and his organization SEFE (Struggle to Economize Future Environment) are fighting for the rights of local communities and protecting the rainforests of southwestern Cameroon. Their work is supported by local groups such as Nature Cameroon and international organizations. For the past three years, U.S. investors have been trying to clear the rainforest for palm oil plantations.

Protests by residents and environmentalists have managed to stall the New York-based Herakles Farms’ project to a large degree. The company has only been able to cut down a few hectares of rainforest to date and had to downsize its plans considerably prior to that: Instead of the requested 70,000 hectares, the government “only” approved plantations totaling 20,000 hectares.

Fighting for every tree

Local communities and Nasako Besingi are fighting for every single tree and are now being targeted by intimidation, legal complaints, arrests and lawsuits. The palm oil company even succeeded in having Nature Cameroon, a local NGO, shut down in November 2013.

In late December 2013, Nasako was summoned at the request of Herakles Farms for “publication of false news via the internet”, an accusation based on a private e-mail he wrote in August 2012. In it, he reports how he was ambushed by junior managers of the company. Herakles referred to the men as “local service providers”.

Nasako and four of his colleagues are also accused of “holding an undeclared public meeting” and handing out anti-Herakles t-shirts. Nasako’s trial is scheduled for March 13, 2014. If convicted, he faces up to six months in prison and a fine the equivalent of 4,000 U.S. dollars or 3,000 euros.