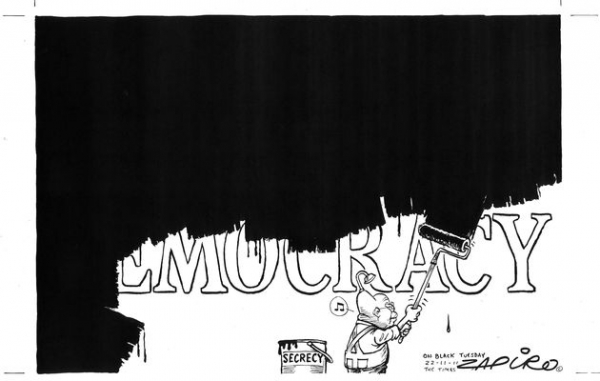 In November 2011, the National Assembly passed the Secrecy Bill, ignoring a monumental public outcry. It was a sad day for South Africa’s democracy, and it became known as Black Tuesday.

The battle now moves to The National Council of Provinces and President Zuma, who both must approve the Bill before it becomes law. We must keep challenging this draconian bill and taking action together to protect hard won freedoms!

The Protection of State Information Bill, in its current form, violates the freedoms that we won in 1994. A bill that criminalises the possession and disclosure of information that is in the public interest has no place in our democracy.

This bill will be used to cover up corruption, unlawful behaviour and inefficiencies. It will enable the abuse of state power.

It will be detrimental to South African society, and we deserve better.

We, the people of South Africa, have a right to know what our government does. Transparency is a cornerstone of accountability and healthy democracy.

Sign these petitions to voice your protest at the rolling back of freedom in South Africa and to ask President Zuma not to sign this bill into law.

“Mr President, government is there to serve the people, not dictate to them. On the 22nd of November 2011, the ANC in parliament proved that it does not care about the wishes of the people who elected it.

Keep your promise of a better South Africa, and on track to a free, open society of informed citizens and accountable government.