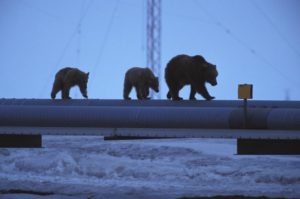 A family of grizzly bears take a walk on the Trans-Alaska Pipeline. Image: Joel Sartore

Oil giant Total is about to build the biggest heated oil pipeline in the world – right through the heart of Africa!

It will rip through some of the most important elephant, lion and chimpanzee reserves on Earth, displace tens of thousands of families, and tip the whole planet closer to full-blown climate catastrophe.

Local communities are doing all they can to fight the project, but they’re up against one of the most powerful companies on Earth, and they need help to turn this into a Standing Rock in Africa.

Even as he plans this pipeline, Total’s French CEO is trying to paint his company as a climate leader. Let’s hold him to account with a massive petition – when it’s huge we’ll deliver our voices with unmissable ads in France and turn this into a PR nightmare for Total. Add your name to stand with the brave communities fighting this – before it’s too late!

Make no mistake – this project is massive. It would cross more than 200 rivers and 12 protected forests, home to an abundance of beautiful wildlife already clinging onto survival. Just one leak could be a catastrophe.

It’s not going to be easy to stop, but Avaaz has a plan – making sure everyone knows Total is behind the pipeline, running ads and op-eds ahead of a historic legal case in France, partnering with grassroots and global organisations, and joining high level advocacy efforts to get influential political and business voices to speak out.

The pipeline shareholders argue it will bring jobs, yet experts say it might be just 300 permanently – not to mention the environmental damage and massive displacement of local farmers it threatens to bring. This will also lock the region into a dirty energy trap, at a time when the world is gearing up for a clean energy future.

This fight is about more than stopping a reckless investment, or even just protecting Africa’s wildlife. We can’t afford to keep pumping oil – this is everyone’s battle, protecting precious life on this planet, defending the most vulnerable, and putting our kids’ future above the interests of a wealthy few. Sign the petition and share with everyone you know:

Avaaz has taken on corporate giants like Monsanto, and won. Now let’s help them go all out to stop Total’s insane project before it’s too late.

To Total CEO Patrick Pouyanné and all backers of the EACOP project:

“As global citizens, we urgently call on you to cancel the East African Crude Oil Pipeline and stop drilling in national parks. Your plans threaten to destroy precious biodiversity hotspots and wildlife habitats – displacing tens of thousands of farmers. This project seriously undermines your commitment to the Paris Agreement and to become “carbon-neutral”. We urge you to align your business under the values you publicly proclaim.”