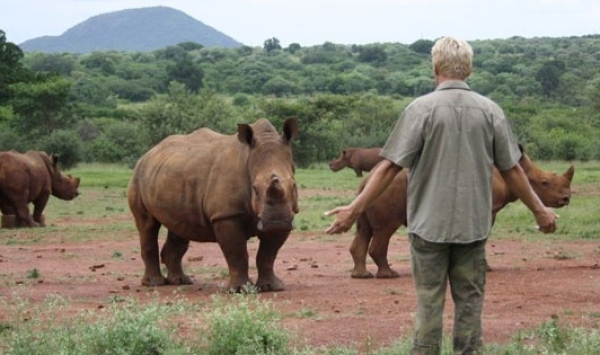 We can never do enough for our rhinos, who are in danger of extinction. In 2009 there was a dramatic increase in rhino poaching, with 135 animals killed. In 2010, a staggering 333 animals were brutally slaughtered for their horns.

Our planet is currently undergoing the largest mass extinction in its history with at least 30, 000 species going extinct every year. However, all is not lost. Hope now lies in communities, organisations, governments and individuals working together towards saving our iconic wildlife.

It is our duty to win the rhino war and set an example of what South Africans can achieve if we rally together behind a common cause.

And rally is exactly what Woolworths did when in May this year they started the MyPlanet Rhino Fund. It aims to provide the public with a tangible way to actively support rhino conservation and anti-poaching efforts in South Africa through a fundraising programme.

MyPlanet to save rhinos

The MySchool MyVillage MyPlanet fundraising programme has, through its MyPlanet card, been supporting environmental and animal welfare since 2007. In partnership with the Endangered Wildlife Trust, a current beneficiary of the programme, Woolworths has created a dedicated fund committed towards rhino conservation.

The EWT MyPlanet Rhino Fund is the culmination of combined efforts between the MyPlanet fundraising programme, the Endangered Wildlife Trust (EWT) and Braam Malherbe, the well-known conservationist and 50|50 presenter. The idea is to provide South Africans with a channel through which to easily and constructively support rhino conservation and anti-poaching, without it costing them a cent. The fund is administered by the EWT and will be used to address the most pressing needs across the country.

The EWT will also provide supporters with feedback on how the funds have been used and allocated, from paying for metal detectors to finding bullets inside wounded animals to supporting the conservation work in the field where poachers are running rife.

Yolan Friedmann, CEO of EWT says, ‘The Endangered Wildlife Trust is delighted to be working with Braam Malherbe and MyPlanet to provide a platform for concerned South Africans to support the conservation of rhino and the improved protection of our threatened wildlife heritage.’

do just one thing

Take a stand against poachers and syndicates responsible for the demise of these iconic animals.

‘My DOT campaign is so simple, if we all just Do One Thing our collective actions make a radical difference.’

Get a MyPlanet card and Do One Thing! Support rhino conservation.

If you would like to Do One Thing to save our precious rhinos, a MyPlanet card can obtained at any Woolworths store or online.