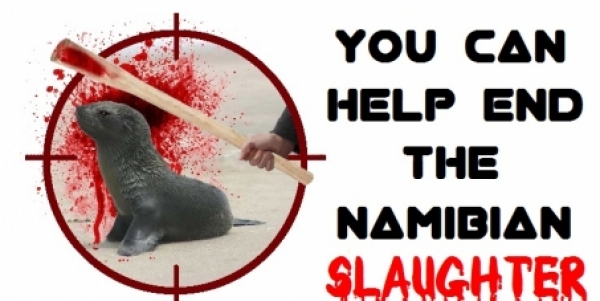 On July 1st 2012, a total allowable catch (TAC) of 85 000 Cape Fur seal pups are set to be beaten to death in Namibia. These pups are still dependent on their mothers, they are not yet weaned and consequently are not yet eating fish. According to Avaaz the pups are separated from their mothers. They are herded away from the safety of the sea, where they are then beaten to death with pick handles. They are stabbed in the throat, often while still alive.

Namibia’s Animal Protection Act 71 of 1962 clearly states it is an offence to ““overload, overdrive, override, ill-treat, neglect, infuriate, torture or maim or cruelly beat, kick, goad or terrify any animal.”

A further TAC quota of 6 000 adult bull seals will be set. These are to be shot at point blank range so that their genitals can be exported to the East, where they are used to make sex potions for the Asian Market.

The seals are slaughtered out in the open on the beach. They are left in piles lying among their faeces and urine in the baking desert sun. They are covered with flies and are trucked some 60km to the processing locations on the backs of non-refrigerated vehicles. Surely such circumstances cannot be classed as a prescribed abattoir?

People want to see them, not smell them

Aside from the cruelty aspect, an independent report undertaken by the Australian Firm “Economists at Large” shows that seal viewing based ecotourism in Namibia will yield THREE HUNDRED times more revenue than the massacre and will create a wealth of job opportunities in a country desperate for employment.

Cape Fur Seals are a threatened species. They have suffered massive habitat loss, several mass die offs and they are listed on Appendix II of the United Nations Convention on International Trade in Endangered Species (CITES).

When South Africa ended their seal cull in 1990, the seal population did not explode as was expected. Rather, the population remained stable and commercial fisheries were NOT adversely affected.

With Namibia facing mounting public outcry and increasing consumer boycotts, a petition by Avaaz is urging the Hon. Minister Bernard Esau to immediately end the annual bloodbath, protect the seals with effective new legislation and to allow all Namibians to benefit from this magnificent tourist drawcard.