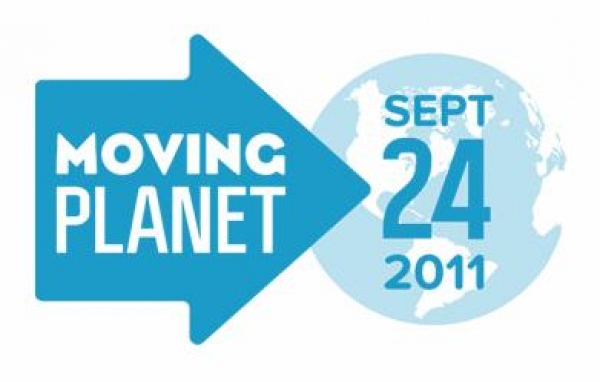 For too long, our leaders have denied and delayed, compromised and caved. That era must come to an end: it’s time to get moving on the climate crisis. On 24 September, Moving Planet will be a day for all of us across the world to put our demands for climate action into motion – marching, biking, skating – calling for the world to go beyond fossil fuels.

How to plan your event:

Step 1. Bring together a team and register your event.

First things first; it’s more fun to organize together. Call up friends, leaders in your community or city, and allied organizations that you think would want to get involved. Host a first meeting to get to know everyone, give people a basic overview of the ideas behind Moving Planet, and start brainstorming. When you’ve got a basic idea in place, register your event on the website – this will let other people in your community find you, and give you access to all sorts of support, tools, and materials for local organizers.

Moving Planet is about using our collective power to call for changes to protect our climate. Think about your goals – like educating and involving a certain number of people in your community–and think about what demands you could bring to your local government, and how you might deliver the message.

Time to get to the strategy – let’s figure out how you can make your voices heard through action:

Will people bike or march? Or move some other creative way? Think about how to incorporate the needs and interests of your city/community.

What are start and finish locations that are easily accessible to people? What symbolic locations can be incorporated into the route, such as houses of government, problems (coal plants), or solutions (wind farm)? What route is visible to the general public?

What time will your action start and stop?

This step may be the most important: if a lot of people show up, it will demonstrate broad public support for you cause and goal. Set a goal for how many people you’d like to see in the streets on 24 September – and create a plan for reaching 10 times that number of people, assuming only 10% of the people you contact will actually show up. Talking to schools, religious groups, community meetings, putting up posters (like the one below) around town, sending emails through listservs, getting a public service announcement on the local radio, and getting on community calendars are a few ways to get the word out.

Like most organizing, you’ll have to deal with some logistics. Here are some key things to consider:

When you have all these details together, be sure to publish the key information publicly on your local website, community calendar, and fliers – key information to include would be start and end times, locations, exciting speakers, and instructions for participants.

If you want to make sure your leaders hear your demands, make sure you invite them out to your event! It’s important to email an invitation, and call a few days later to follow up – do it early so their schedules haven’t filled up. A few ideas for engaging your leader as a part of your event are a) asking them to speak in front of the crowd about their plans on climate change (so they have to say what they are or aren’t doing publicly), or b) ask them to sign a pledge to take on your demands.  This can work especially well for candidates who are seeking election who may promise things now that you can hold them accountable to later.

Artistic signs, colorful banners, and fun chants and songs are some of the best ways to get people excited for your action, and to send your message in a clear and positive way. Host a time to paint banners and signs before your action, and invite volunteers to come. Have some sample messages so that people don’t go too off topic with their signs. Come up with some fun chants or songs for the crowd to sing as you move.

Step 8.  Invite the media and BE the media!

The media is one of our most important ways to make our voices heard.  It’s important to figure out early who the reporters who cover environment are at your local paper, radio station, and TV station, and try to build a relationship. A week out from your event you’ll want to send a media advisory, followed by a call to make sure they’ve received it. On the day of you’ll want to send a press release, and make another call to make sure they come out!

On the big day, lace up your shoes or hop on your bike, and get out in the streets. Make sure you’ve delegated key roles for that day â€“ individuals to liaise with the police, the media, to organize the speakers, to direct the marchers or cyclists along the planned route, etc. Make sure everyone speaking or being interviewed knows the key messages you’re trying to send that day, and have fun!

Step 10.  Report Back and Keep the movement moving.

After the event, we’re asking everyone to send in their photos and videos to help us create a shared story. After your media has been uploaded, take a breath, and celebrate with your team all that you’ve accomplished. Be sure to thank everyone who helped, and organize a follow-up meeting as soon as you can. Assess what went well, and what could have gone better so you can improve for the next action. Discuss what you have left to do to achieve your goals, and start planning your next steps for building the movement.

Moving Planet – a day to move beyond fossil fuels.