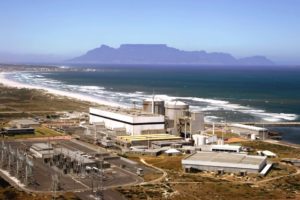 According to the Southern African Faith Communities’ Environment Institute (SAFCEI), the recent revelations by Minister Pravin Gordhan that three separate safety ‘incidents’ had occurred at Koeberg Power Station in 2014 and 2015, should raise a red flag for South African citizens. Not only is the executive decision to keep the public in the dark about these incidents problematic, but possible safety issues contradict the SA government’s assertion that nuclear energy is safe, clean and a solution to climate change.

Peter Becker, from Koeberg Alert Alliance says, “When something happens at Koeberg, the National Nuclear Regulator (NNR) decides whether it should be classed as an ‘incident’ or not. If it is an incident, they need to report on this and the public would be better informed. But, if they deem it to be less than an incident, then they do not need to report on it, and since the public is none the wiser, there would be no public outcry. The question is, how does the NNR decide what to report on and what to omit? And, shouldn’t citizens have some say in what the NNR is obliged to share with them?”

Says Becker, “While the NNR’s 2014 Annual Report does mention “minor occurrences”, the 2015 report stated that there were no nuclear incidents reported during that period. Why then does Minister Gordhan say that there were indeed incidents at Koeberg? Either the Minister needs to clarify his language, or the NNR is deceiving us. Furthermore, it is imperative that the public is made aware of any and every problematic event at Koeberg, so that we have a more realistic picture of what is happening at the power plant.”

SAFCEI’s Executive Director, Francesca de Gasparis says, “The government and nuclear industry are downplaying the dangers associated with nuclear energy production and have concealed incidents from the public, leading citizens to believe that Koeberg is 100% safe and operating without any issues.”

“Not alerting the public to nuclear incidents is problematic because it gives a false picture of the realities of nuclear energy production. The issue of access to information, what information is available in the public realm and who gets to decide what is shared, is particularly risky when dealing with this kind of energy production. It makes us ask, once again, whether South Africa needs or wants nuclear energy as a part of its energy future?” says de Gasparis.

SAFCEI’s Energy Justice Coordinator, Vainola Makan says that South Africa should take note and learn from what happened at Fukushima eight years ago. As a result of a tsunami in 2011, while trying to contain the radiation from the damaged plant, human error turned this event into a major incident with uncontained radiation spreading right across the Pacific ocean to this day. She adds that an independent investigation found that the catastrophe that followed was ultimately “the result of collusion between the government, the regulators” and the nuclear industry.

Says Makan, “It is very concerning that, in the case of an accident at Koeberg, Eskom is required to act. If we consider the revelations of mismanagement and corruption at Eskom, a state-owned enterprise (SOE), can we honestly expect citizens – who are still suffering as a result of the widespread unethical governance of the corrupt Zuma-era – to rely on Eskom to secure our safety in the case of an emergency?”

“The people living around the nuclear plant in Fukushima were also told not to worry and that the plant was absolutely safe, but the disaster happened and many of them are still displaced, and suffering illnesses, as a result of their exposure to unsafe radiation levels. We cannot keep denying that there are serious and far-reaching risks associated with nuclear energy. It is therefore, important that citizens are made aware of any and all risks,” adds Makan.

“As the amount of high-level, toxic radioactive waste continues to grow at Koeberg – at about 30 tons per year – it becomes increasingly important for civilians to be well-informed and educated about the growing risks, and also possible emergency scenarios and how these should be addressed. It is therefore, quite concerning that the NNR repeatedly states on its website that not only is an accident at Koeberg unlikely, but it also eliminates planning for a number of “unlikely” emergency scenarios as well.”

“The current plans are completely inadequate, as the reference to leakage and spillage is reactive instead of preventative, and only focuses on dealing with downwind air pollution up to a 16km radius, with no mention of possible spillages into the Atlantic Ocean or leaks into the ground. We need a comprehensive transport plan to ensure that people at risk can be transported out of the vicinity when an emergency leak happens. This should include safety measures to protect those responsible for transportation as well,” concludes Makan.

Becker adds, “With Koeberg supplying just about 4% of the country’s electricity needs – when both reactors are running – is it worth the risks of these leaks? No! The Koeberg Nuclear Power Plant should be shut down and decommissioned immediately. This will reduce the risk of further leaks and incidents. The consequences of Western Cape farmlands being contaminated with radioactive material would be economically and socially catastrophic, and much worse if inhabited areas area also affected.”

“In terms of to the public’s right of access to information, the Koeberg Alert Alliance has made a PAIA application for the seismic risk study – from when they were wanting to build the new plant at Duynefontein – but the NNR continues to keep this secret from us,” he concludes.