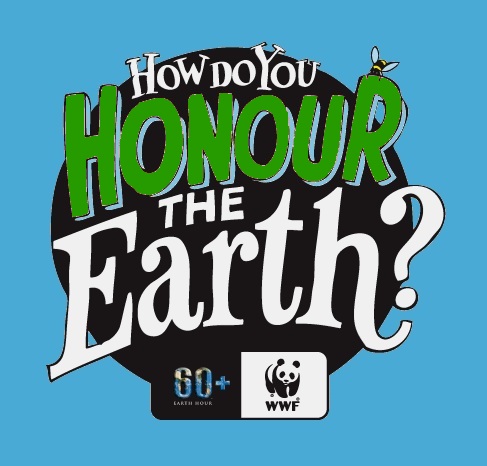 Throughout March – and ahead of Earth Hour on 29 March 2014 – the World Wide Fund for Nature South Africa (WWF-SA) is sending out a powerful call to action by asking: ‘How do you honour the Earth?’

Beyond the 60 minutes of darkness, Earth Hour is much more than simply switching off lights for an hour once a year. It’s a growing international movement of citizen-driven action for the environment.

That’s why WWF-SA is asking individuals and organisations to make a public promise to the Earth by thinking about their choices around food, water and energy use, and understanding how these impact on the environment.

Making choices that support our planet

Each time a promise is posted on the “How do you honour the Earth” online platform at wwf.org.za, a virtual planet will be restored from degraded to beautiful. The platform also allows users to see the promises of other people and organisation and to share them on social media, with the intention of creating a conversation and momentum for the environment.

Says Dr Morné du Plessis, CEO of WWF South Africa: “It is essential to remember that through our everyday consumer choices, and how we spend our money, we are actually voting for the products, services and organisations that strive to live up to an environmental mandate. Let’s make choices that support our planet.”

The real impetus of the annual Earth Hour campaign is to turn the awareness of one hour into actions beyond the hour, whether through individual consumer choices, crowdsourced support or crowdfunding contributions. This year’s Earth Hour campaign culminates on Saturday, 29 March 2014 at 8.30pm when South Africa joins others around the world in turning off lights for an hour as an act of symbolic unity.

Make a promise to take action

“Beyond switching off your lights, WWF-SA urges you to make a promise to the Earth and take action for the environment this year. The time is now. Together we can leave a legacy of flourishing ecosystems, healthy rivers, and abundant flora and wildlife,” concludes du Plessis.

In addition to the “Honour the Earth” campaign, six South African municipalities have competed in the international Earth Hour City Challenge for sustainable city management. Cape Town and Durban were named finalists and Cape Town was selected as South Africa’s Earth Hour Capital, competing against 32 other finalists from around the world. The winner will be announced in Vancouver prior to Earth Hour.

Both Cape Town and Durban are also still in the running for the international social media “We Love Cities” campaign which asks citizens to vote for their favourite sustainable city.

Also, the local ‘Restore the Roodeberg’ campaign, which aims to buy a crucial piece of land for incorporation into the Table Mountain National Park, has been selected as one of 10 global projects as part of Earth Hour Blue using crowdsourcing to raise funds for a worthwhile environmental cause.

The campaign needs to raise R7,2 million to buy this land which is currently in private hands.