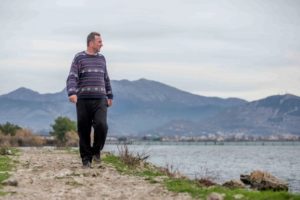 “I am 52 years old and I have never seen this kind of climate. The winter is a lot tougher and the tides are higher,” says Albert Pati, father-of-three. Image: UNEP / Lisa Murray

When Albert Pati moved closer to the sea to open a beach bar overlooking the Mediterranean in Albania, he never imagined that the sea would also be moving closer to him, now eroding the soil around his restaurant floor.

Even before the outbreak of Covid-19, families and businesses around the Adriatic Sea were faced with a serious threat. One of the countries hardest-hit by coastal erosion in Europe, almost a third of Albania’s 427km coastline is being eroded by violent waves. And the challenge is accelerating at an alarming speed due to climate-induced storm surges and rising sea levels.

“One time I was driving my children to school when the sea came in front of me and flooded the car,” explains Pati. “If the coast is not protected, then God save us.”

In Lezha District, where Pati’s business operates, nuclear bunkers built in the 70s during Albania’s communist era are now lost under the sea, the barely perceptible roofs only just emerging above water.

“The damages have been extraordinary,” laments Pati. “Our fishing deck was completely wiped out in a storm. But who to complain to about these things?”

COVID-19 came as a second blow. Prior to the outbreak, tourism contributed 15 percent of Albania’s GDP, employing more than 90,000 people. But with travel having ground to a halt for nearly two months, tourism in Lezha district has been severely impacted.

To adapt to the changing climate in Lezha District, the government of Albania is turning to a solution as old as the sea itself: Nature.

Covering around 4,000 hectares, the Kune-Vain Lagoon system is a biodiversity wonder, home to around 200 bird species, and an ecological corridor for birds on their migration routes. BirdLife International designated the region an ‘Important Bird Area’ of global significance.

The lagoon doesn’t only serve wildlife, but also people, by acting as a natural barrier against coastal erosion, protecting towns and villages– like Pati’s – from flooding. 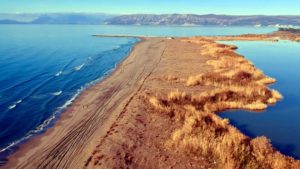 Once this narrow sand dune erodes away, the lagoon (right) will turn to sea (left) and disappear. Image: UNEP / Marcus Nield

Walking along a narrow aisle of sand dune – the sea on one side and the lagoon on the other – Pati explains:

“Where we stand now is a protection for the villages and for the town, because if water covers this ground, the sea will get to the inner part of the lagoon and flow into the town.”

If this roughly 30-metre-wide corridor of sand succumbs to erosion, the lagoon will vanish and there will be nothing to stop the sea destroying the coast.

With support from the Global Environment Facility (GEF) and the United Nations Environment Programme (UNEP), the government of Albania is now reforesting and replanting 2,000 metres along this strip of sand dune. By restoring the vegetation, the project seeks to bind together the soil, strengthening the lagoon’s ability to withstand erosion. The restoration activities are selecting indigenous tree species that are both flood and salt tolerant to ensure long-term survival.

This approach of using natural solutions to withstand the impacts of climate change is known as ecosystem-based adaptation – in essence, look after nature and it will look after you.

“Ecosystem-based adaptation protects people from climate change, but also gives space for nature to breathe,” says Atifa Kassam, UNEP’s Programme Officer for the restoration project. “Citizens from all over Albania come to see the Kune-Vain Lagoon. By harnessing the lagoon to help people be resilient to climate change, we can preserve the vital ecotourism industry that keeps nearby towns afloat.”

With over 90 percent of lockdown measures imposed by the Albanian government to prevent the spread of coronavirus now eased, taking measures like this to protect local tourism as it recovers is critical.

The GEF-backed project is training local communities and Albanian government staff on ecosystem-based adaptation, improving the capacity of policymakers to address climate change by using nature. It is also engaging students through hands-on learning, and facilitating studies of PhD and Masters students as they analyse the impacts of the ecosystem-based adaptation at Kune-Vain Lagoon.

At his beach bar, Pati points to the trees he’s planted on his private land to protect it from storms.

“I’ve chosen this tree because it’s very strong and resistant,” he says, pointing to a tree that botanists call fraxinus ornus. “It grows easily and isn’t harmed by insects.”