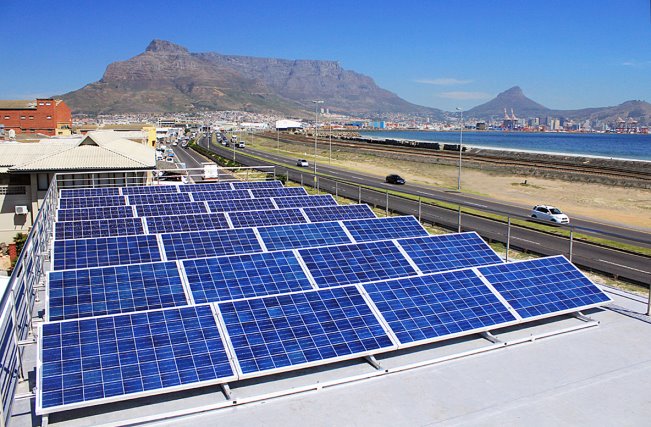 I thought that you might be interested in a green issue with the Cape Town City Council, writes our reader, Peter Brooks:

Their CTCC is claiming to be green – and they are doing some good things, like supporting solar water heaters and large solar farms.

However, they’re doing their best, despite the capacity problems with Eskom, to discourage individuals from having domestic solar electricity panels fitted. They’re doing it by making the finances unattractive.

Residential customers that want to be compensated for energy that they place on the grid will be required to move to the SSEG tariff structure and to have an industrial bi-directional AMI credit meter installed. The purchase and installation of this meter will be done by the City and will be for the generator’s account.

Residential small-scale embedded generation tariff comprises of the following charges which will be updated annually:

Residential generators that want to connect to the grid, but do not wish to be compensated for energy placed on the grid can remain on their existing tariff structure, but will be required to install a device which blocks reverse power flow. The City of Cape Town indicates that it will not permit existing meters to run backwards.

They’ve reduced the amount they pay for electricity already from 56.28 to 49.72 – at this rate you have to give the city 26kwh free, as well as pay for the meter so they can rob you, before they’ll pay you anything, which really isn’t a good deal at all. If you do ever need to take net power out of the grid they charge more than double, so, to break even you have to put back 2kwh for every one you take out.

Nobody seems to have picked this up, so the CTCC is able to present a false green image. Perhaps you could help with an article exposing this.

The City  responded as follows:

The City is certainly not trying to mislead residents with regard to environmentally friendly initiatives such as the Small-Scale Embedded Generation (SSEG) tariff. The City has always been completely transparent about potential financial benefits for SSEG users. In an ideal world, it would be the case that selling power back on the grid resulted in savings for the consumer/producer, however there are certain practical difficulties in this regard that we have to contend with that make this inappropriate.

It must be noted that the figures provided by the letter writer are in fact incorrect. A copy of the tariff is attached. Furthermore it is unclear where the ’26 kWh for free figure’ was drawn from.

Furthermore, residential consumers (who generally are not registered as VAT vendors) will not be refunded VAT and will be compensated 56,68 c less 14% VAT which amounts to 49,72 c per kWh. This is a SARS requirement.

In conclusion the City is fully committed to the adoption of solar power, and progress towards a more sustainable future. The tariff was formulated not to exploit, but to ensure that costs of providing electricity are recouped, and so that those who are not financially able to invest in solar power for their homes are not forced to make up for the shortfall.

Yet the issue was still not clarified, said Peter:

Unfortunately the council hasn’t understood the most important point. The 26kwh came from their figures without VAT.

So every day, with their scheme, you have to give them 23kWh of generated electricity free before they’ll pay anything.

The average electricity consumption around the world is here. South Africans consume an average of 4,389 kWh per year = 12 kWh per day.

Home generators must produce a surplus

So the Cape Town council is asking people who generate their own electricity to produce a surplus of over twice the average consumption per house in the country! This makes it completely uneconomic.
The other way of looking at it is: With solar power you don’t get any electricity at night. So, if you generate all the power you need during the day but still need power at night – say half the national average, 6 kWh. Then the Cape Town city council will charge you:

If you have no solar power, then your nightly cost is:

So, help out by taking all your power of the grid during the day, and the City Council will charge you twice as much for your nightly consumption!

Either way you look at it that’s a huge penalty they’re imposing to discourage the use of electricity.

What service are you charging for?

If they stopped the ‘service charge’ (what service are you getting if you generate your own power that and ordinary consumer doesn’t get?… none) then it would be fair.

My point is that the ‘Service Charge’ of R13.03 a day means you have to either give 23kWh (26 if you exclude VAT) to them free before you get anything back – or you have to pay twice as much for your power at night.

Why is there this huge tax on home solar power?

We received the following response from the Mayoral Committee Member for Utility Services Cllr Ernest Sonnenberg:

“The difference in the price the City pays for electricity and the price the City sells it for covers the cost to provide and maintain the network and associated services (repair work, infrastructure replacement etc.). So what the writer considers a tax on solar home power is in reality the contribution that the SSEG consumer makes for use of the electricity grid. In normal non-SSEG domestic tariffs, this cost is included in the energy charge. This is in line with the draft tariff guidelines from the National Energy Regulator of South Africa. The City’s tariffs are subject to their approval.

On the present SSEG tariff, an average (non-lifeline) residential consumer of electricity will pay approximately the same amount per unit of electricity as someone who consumes the same amount of electricity but does not have solar technology installed. The City is legally and financially not in a position to subsidise those who can afford to install PV, particularly considering the large number of poor residents who cannot afford electricity or PV systems.”