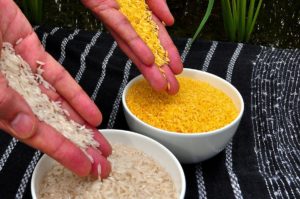 If a peer reviewed article states that genetically modified plants are harmless, there’s a good chance they are knowingly or unknowingly lying. Research published in the leading scientific journal Science Direct, concludes that commercial interests help shape the findings of peer reviewed articles about the health risks of genetically modified plants.

The study found the following:

Since the first commercial cultivation of genetically modified crops in 1994, the rapidly expanding market of genetically modified seeds has given rise to a multibillion dollar industry. This fast growth, fuelled by high expectations towards this new commercial technology and shareholder trust in the involved industry has provided strong incentives for further research and development of new genetically modified plant varieties. Considering, however, the high financial stakes involved, concerns are raised over the influence that conflicts of interest may place upon articles published in peer-reviewed journals that report on health risks or nutritional value of genetically modified food products.

A study involving 94 articles selected through objective criteria, determined some factors associated with study outcomes that cast genetically modified products in a favourable light. Money (direct research funding) was not the only root of evil; a strong association was found between authors’ affiliations with the GM industries and the study’s outcome – in other words, professional conflict of interest. These results were compared to similar studies on conflicts of interest in other areas, such as biomedical sciences, tobacco, alcohol and nutrition research.

The presence of conflict of interest in scientific research does not imply actual behaviour of study authors. But it does present a risk that the study outcome may be improperly influenced. This study focused on how commercial interests may interfere with outcomes of risk and nutrition analysis studies of products derived from GM plants. A study was necessary because of the high financial stakes involved in the development of such products and the increasing weight of private funding in research in recent years.

The observed association between study outcome and presence of financial conflict of interest could be explained by different factors: publication restrictions imposed by industry funders; contractual agreements of authors with industry; industry bias favouring friendly research; and researchers that are sensitive to the financial interests of their industrial sponsors or employers.

Apart from the observed relations, it was considered that types of funding other than industry, such as governments and NGOs may also condition investigation. Additionally, values held by scientists may influence research outcomes.

The study emphasises the need for all affiliations whether financial or professional to be openly declared in scientific publications. In situations where health risk assessments or nutritional evaluation studies of GM products serve to inform decision makers, procedures could be developed to minimise the risk of decisions being taken based on study outcomes that have been influenced by conflicts of interest. This may best be achieved by giving preference towards peer-reviewed studies where no conflict of interest can be observed.