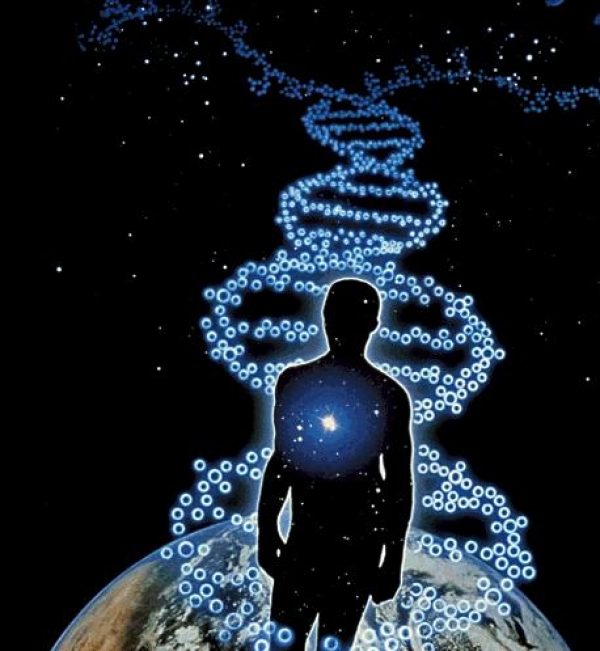 How much control do we have over our own lives? Are we really controlled by our genes, trapped in our own selfishness, like some modern authors want us to believe? Just how much power do we have to shape our lives and those of others?

Contrary to what many people are being led to believe, a lot of the emphasis placed on genes determining human behaviour is nothing but theory and doctrine. The “selfish gene” model is an assumption, it is not a scientific fact.

What Is The Central Dogma?

The central dogma is the doctrine that information in our cells flows only in one direction – from DNA to RNA to proteins. Simply put, it is a dogmatic belief in absolute determinism.
Let’s take a quick look at its history. Back in 1990, a huge, international research program began – the human genome project. Its stated goals were to map out all human genes and their interactions using computer software and then to convert that knowledge into (profitable) “benefits” for mankind, such as finding cures for the most horrible diseases.
They sure made it sound good and they spent a lot of taxpayers’ money on it, but was the whole project used for good? Personally, I don’t think so.

In essence, what the central dogma says is that since it is proteins that carry out the essential life-processes inside our cells, and their functions can only do what our genes say (this is what the medical establishment and certain fanatical branches of evolution theory want us to believe), then we humans are nothing more than the calculated, deterministic expression of our genes. We’re little robots whose biology, emotions, health and beliefs are not of our choosing.

This is the theory that is being taught in medical schools and universities all over the world today. Fortunately for all conscious people, this disempowering belief has been proven to be false.

Fifty years before the publication of Darwin’s The Origin Of Species, frenchman Jean Baptiste Lamarque postulated that living beings must have an innate perception of their environment in order to evolve, and that they evolve in response to changes in their surroundings. His idea was that genetic mutations are definitely not random. There is an inherent intelligence at play in life that we can’t even begin to understand.

The response of the “scientific community” at the time was not favourable. They ridiculed Lamarque’s theory and eliminated him from the history books, giving Darwin the sole credit for discovering evolution, even though, in reality, Darwin published his book fifty years after Lamarque and his book based a lot of its theory on the work of yet another man, Alfred Russel Wallace, many of whose ideas Darwin copied.

According to Lamarque, there is an interplay of forces between living beings and their environments. According to the Darwinian model, evolution is strictly deterministic and is based on random mutations.

So, who got closer to the truth? Luckily for us, Lamarque was right about at least one thing: cells have consciousness.

The Emerging Science Of Epigenetics

Plenty of highly intelligent biologists have proven beyond a doubt that the determinism of the central dogma is false. Genes do not determine human outcomes – it is our responses to our environment that actually determine the expression of our genes.

This was proven definitively in 1988 by British molecular biologist John Cairns. Cairns took bacteria whose genes did not allow them to produce lactase, the enzyme needed to digest milk sugar, and placed them in petri dishes where the only food present was lactase. Much to his astonishment, within a few days, all of the petri dishes had been colonized by the bacteria and they were eating lactose. The bacterial DNA had changed in response to its environment.

This experiment has been replicated many times and they have not found a better explanation than this obvious fact – that even primitive organisms can evolve consciously.
So, information flows in both directions, from DNA to proteins and from proteins to DNA, contradicting the “central dogma.” Genes can be activated and de-activated by signals from the environment. The consciousness of the cell is inside the cell’s membrane. Each and every cell in our bodies has a type of consciousness. Genes change their expression depending on what is happening outside our cells and even outside our bodies.

What Does This Mean For Us?

We are free to make decisions that impact our lives and those of others. We are not robots carrying out the commands of our genes. Our beliefs can change our biology. We have the power to heal ourselves, increase our feelings of self-worth and improve our emotional state. Every aspect of our lives can be improved with the right intention.

The worst thing we can do as thinking and feeling people is to get cut off from our deep, positive emotions and let fear and anger take over our lives. When we allow ourselves to be taken over by negativity, we are putting ourselves in a mental-biological state of fear akin to the fight or flight response.

In order to grow positively as human beings, we need to express positive emotions such as love, affection, joy and a will to conquer ourselves and our own lives. When we change our beliefs, we change our emotional states. When that happens, we change our lives.

First we have to believe. Only then do we give ourselves the opportunity to achieve.

Konstantin is a former stock-trader. After quitting his job, he studied biochemistry and got into natural health and the internal martial arts. He writes the “Life Sucks” self-improvement blog where you can read his recent post on “What Is Happiness?”.