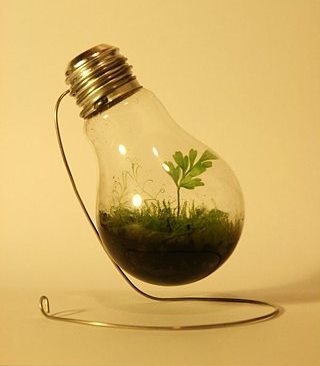 We’ve all heard countless times how important it is to switch from normal incandescent light bulbs to energy saving ones and from zinc batteries to rechargeable ones.

Some of us have heeded the call. But all is not fluorescent light and roses if one doesn’t take the time to educate oneself concerning the proper way to dispose these products and the dangers of taking the necessary measures too lightly.

Light bulbs and batteries contain dangerous metals like mercury and cadmium that if allowed to leach into the soil and groundwater can pose serious concerns to the health of humans and ecosystems. Elemental mercury can be absorbed through the skin and can cause allergic reactions as a result of mild exposure. However, when mercury enters bodies of water, biological processes transform it to methyl mercury, a highly toxic and bio-accumalitive form. Fish can absorb methyl mercury from their food and directly from water as it passes over their gills. The fish ends up on our plates still containing the mercury, as it can’t be removed by any cooking process. It is therefore essential to make sure we dispose of light bulbs and batteries correctly in order to prevent exposure to these toxins.

However according to an article published by Eskom the mercury content in a compact fluorescent lamp (CFL) should not be a cause for concern for the individual home owner, while in use, as it contains less than 5 milligrams of mercury – less than a watch battery. So why then should we worry about it?

‘Intact CFL’s emit no mercury and pose absolutely no health risk. In the case of accidental breakage, the amount of mercury inside an individual lamp is too small to cause any health risk, but it is still good practice to minimize any unnecessary exposure to mercury, as well as risk of cuts from glass fragments,’ says Woolworths sustainability manager Justin Smith.

It is perhaps comforting to know that the light bulbs in our homes pose no direct threat. But considering the amount of mercury that accumulates on waste sites, if light bulbs are thoughtlessly disposed of in household trash, is different.

There is some good news concerning batteries. In the past all ordinary zinc batteries contained fairly high doses of mercury. However, proudly South African endorsed battery manufacturers Eveready have stopped using mercury in their batteries. They are using the naturally occurring key ingredients zinc and manganese dioxide instead which, when disposed in conventional waste methods, converts itself to various salts of zinc and manganese which act as micronutrients for the soil.

Energy saving light bulbs and rechargeable batteries are still the better and more responsible options. But we have to be eco-wise when it comes to responsibly disposing of potentially harmful materials.

Initiatives by, among others, Woolworths and Pick ‘n Pay stores are making the correct disposal of light bulbs very convenient by placing special recycling bins in some of their stores.

‘We have bins in about forty stores around South Africa and plan to expand the collection network soon,’ says Smith.

‘The collection bin has been specially designed to ensure that there is no danger of CFL lamp breakage. The bins are regularly removed by Nova Lighting for disposal in accordance with all relevant South African legislation, ensuring that these used bulbs pose no threat to the environment.’

Furthermore, Lumino, an emerging fluorescent lamp recycling company is treating and disposing fluorescent lamps. Their technology involves the crushing of the lamps in a chemical solution to immobilize the mercury. The treated lamps are stored in drums and transported to a permitted hazardous landfill site. Apart from treating the mercury inside the lamp, the contaminated parts of the lamp should also be disposed in a specific procedure. The techniques used aim at zero emissions between the crushing station and the landfill site, and to safeguard against further emissions of landfill gas and the conversion of mercury to methyl mercury.

LED’s better for all

Perhaps on this point it is vital to consider that ‘prevention is indeed better than cure’ and that taking measures to prevent exposure to mercury can indeed be prevented by using LED lights rather than CFL lighting. LED is an acronym for ‘Light Emitting Diodes’, solid light bulbs which are extremely energy-efficient. Until recently LED’s were limited to single-bulb use in applications such as instrument panels and electronics, but manufacturers have expanded the application of LED’s as they now have standard bases which fit common household light fixtures. LED’s are indeed the next generation in home lighting. But why are they a better alternative to CFL lighting?

LED’s last up to ten times longer than compact fluorescent lights, far longer than typical incandescent lights, and since LED’s do not have a filament, they are not damaged under circumstances when a regular incandescent bulb would be broken. They use approximately a third of the electricity used by regular incandescent light bulbs and as a result they do not build up heat, which in summer, lowers the need for air conditioning. Because LED’s have such a long life, they are more cost-effective than incandescent light bulbs. Also, they contain no mercury, but it is still vital to dispose of them correctly. There are several differences between LED’s and CFL’s. Visit Eartheasy for a complete list of definitions and pictures.

When we know about something we become responsible for it. When we are responsible, it becomes our duty to inform those around us. Mercury derived its name from the ancient Roman God known for his speed as a messenger to the gods. Perhaps being a speedy messenger and telling our friends and family to stop putting light bulbs and batteries in household trash can be the one good legacy Mercury leaves behind.