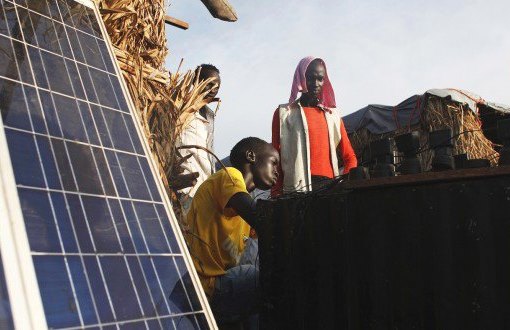 US President Barack Obama has unveiled a final set of rules to cut greenhouse gas emissions in a big initiative which would form a major plank of his legacy as he winds down his term in office.

In what has been termed the strongest action ever taken in the United States to combat climate change, the rules will see the country’s hundreds of coal-fired—and polluting—power plants gradually shift towards cleaner energy sources such as natural gas, and significantly, renewables.

The change adds to the global push towards using more clean energy in an attempt to limit global temperatures to two degrees above pre-industrial levels to head off the worst effects of climate change, which include food and water shortages and unpredictable and more intense floods and droughts.

Such scenarios hold big implications for Africa, which  is worst hit despite being the least polluter with 3% of carbon dioxide emissions (even this is relative—a lot of the haze over the Indian Ocean is believed to be from cooking fires run on fuelwood and charcoal, but by international agreement are not counted as their raw material is renewable).

A major meeting in Paris in December is expected to provide a deal on global climate change and which would take effect in 2020.

Africa starved of funds to adapt

But as the developed world lurches towards a greener future, Africa will struggle to keep up even with this disjointed pace, starved of the funds needed to adapt. UNEP’s Africa Adaptation Gap Report has estimated that adaptation costs for Africa alone could reach approximately $350 billion annually by 2070

The continent already has a major energy deficit, which it has identified as the biggest impediment to its growth. Fossil fuels in Africa are, like the rest of the world, big business, but on the continent they represent a more existential problem. Power generation from oil and coal (and the lower-carbon but still-polluting natural gas) brings about much-needed economic expansion, including through fuelling key industries such as transport and manufacturing, in the process creating millions of jobs.

African oil importers, who are the majority, would also be eying the economics of the fallout in the developed world: less fossil fuel use means they get it at a cheaper price. One scenario forecasts demand for oil products, and for coal, from sub-Saharan Africa as doubling in the next 25 years.

Green energy, despite its increased desirability and cheaper running costs, is also expensive to start up. The International Energy Agency (IEA) estimates that to have an 80% chance of maintaining the warming limit through to 2050, the world needs an addition $36 trillion in clean energy, or nearly 15 times Africa’s nominal GDP.

As such, requiring African countries to apply the squeeze on fossil fuels is, to put it mildly, a big ask. The general sentiment has been that feeding its citizens now is a bigger priority than focusing on the shift to clean energy, even if the benefits, and consequences of not doing so, are apparent.

The outgoing president of the African Development Bank (AfDB), Donald Kaberuka, voiced this in March when the bank’s decision to continue financing power plants that use dirtier coal was questioned.

“To every single African country, from South Africa to the north, the biggest impediment to economic growth is energy, and we don’t have this kind of luxury of making this kind of choice.”

But some African countries have however been taking on the challenge for more predictable renewables, even if for disparate national reasons. Ethiopia for example has no oil or coal, and with agriculture employing the vast majority of its people, building a climate-resilient economy has become a top priority for the government.

Kenya recently struck oil, but had drawn up a growth blueprint that identified electricity as key to its execution, informing its earlier focus on alternative energy sources that are faster developed, while other countries like rich but oil-scarce Morocco have few options. Sometimes it is almost by accident: The biggest foreign direct investment in Ghana’s history, approved last week, will be in costlier offshore natural gas, which has been untapped in favour of ground oil and hydro, challenges with which led to debilitating load shedding.

But in addition to the consequences to Africa’s agriculture-heavy economy of doing little to mitigate, green energy is increasingly good business. It cuts fuel costs, and is said to have a greater job-creation potential than fossils.

The IEA projects that renewable energy will make up nearly half of sub-Saharan Africa’s power generation by 2040.

The global shift to cleaner energy is also expected to spark a boom for renewable energy—investors are looking for green investments— including a potentially billion-dollar trade in pollution credits. Whoever gets the mix right could feasibly become a continental energy powerhouse.

We take a look at what the leaders are doing:

Ethiopia – only 25% connected to national grid

Only 25% of the country’s 94 million are connected to the national grid, while its fast-growing economy(pdf) needs to ramp up its electricity output, currently at just over 2,000 MW, by at least 20% annually to just keep up.

With its famed Grand Renaissance dam due for completion in 2017, the country is seeking alternatives to boost generating capacity from 2,300 MW. It has the potential to generate 45,000 MW, the second-highest after the DR Congo, but under its 25-year national strategy the plan is to generate 37,000 MW by 2037, with a cost tag of $100 billion.

The Horn of Africa country last month opened the 153-megawatt (MW) Adama wind farm, currently the largest wind-farm in sub-Saharan Africa, but only the latest of three giant wind farms.

Adama, which can power an estimated 10 million efficient light bulbs, was built within two years—a third of the time required to put up the 6,000 MW Renaissance Dam that had also earlier run into environmental concerns. Another wind farm is expect to be located near its north-eastern border with Djibouti, and would produce 300 MW.

The country also has a geothermal project in its central Oromia region, with developer Corbetti saying $2 billion would be needed to generate the full 500MW by 2023. The Ethiopia government in the wake of Obama’s visit agreed to buy power from the plant, the first by private countries in the tightly-controlled country.

Ethiopia has set itself a target of cutting its carbon emissions by almost two-thirds by 2030—the highest national target yet of those presented to the December UN climate change conference.

The first African country to build geothermal energy sources, this stream now accounts for 51% of the country’s electricity needs, making it Africa’s largest producer and freeing it from over-dependence on dams. Kenya aims to expand its installed capacity to 6,700 MW by 2017, the bulk of it from renewables, from just 1,700 MW in 2013, as it anticipates a peak demand of 15,000 MW by 2030.

In 2010, geothermal accounted for only 13% of Kenya’s power, now it holds a 5% share of the global installed capacity. This has seen its electricity bills shrink by 30% since 2014, according to the World Bank.

Its Olkaria project is one of the largest in the world, with the plan to raise production to 740 MW by 2018, as part of the east African country’s fast-tracked green energy growth plan. It has a geothermal capacity of 5.5 Gigawatts.

Geothermal energy, generated from natural steam from the earth, some reaching up to three kilometres underground is not affected by weather changes, unlike hydro. Together with Ethiopia, the two countries have 80% of the continent’s untapped geothermal power.

Last month president Uhuru Kenyatta flagged off the 310-MW Lake Turkana Wind Power project, which when complete would become Africa’s largest wind power plant. First production is scheduled for late 2016, with the full project coming on board by mid-2017.

The country is also rich in solar energy, with US-based microgrid developer Powerhive set to offer off-grid electricity to more than 200,000 homes following a successful pilot that saw people pay for the energy using their mobile phone. First Solar, the biggest US solar panel producer, made an undisclosed investment in Powerhive in 2013.

Morocco’s Tarfaya wind farm has 131 turbines compared to the 365 turbines that will power Kenya’s Turkana project, but at completion will generate 301 MW, pipping the Kenya project.

The oil and gas-scarce North African country is aiming to be a world-class renewable energy producer, including exporting clean power to nearby Europe. It expects to build five new solar plants by 2020, which would have a combined output of 2,000 MW and cost $9 billion, and the general project is the largest of its kind in the world.

It has also planned a string of wind farms along its Atlantic coast, with a target of 2,000 MW by 2020 which would lift its renewable energy production to 42% of its total power mix in that year.

South Africa among top 15 CO2 producers in the world

South Africa’s Cookhouse wind farm was the biggest in Africa before Ethiopia’s, with 138 MW provided by some 66 turbines, and which started coming online in late 2014. A $300m wind energy project is also set for the Eastern Cape, in addition to plans for smaller initiatives.

South Africa has been putting up renewable energy systems as it seeks to reduce its overwhelming reliance on coal, which places it among the top 15 producers of carbon dioxide globally. 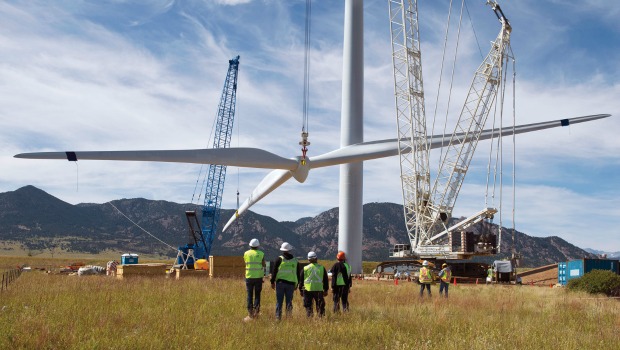 The country, at 30,000 MW, accounts for about 45% of Africa’s electricity, but it is generated on ageing coal-fired plants, causing it to struggle to meet demand. It is however adding to this with the construction of Medupi, which at 4,746 MW of higher-capacity power will be the largest dry cooled coal power station in the world.

According to the government, renewables have added some 4,300 MW of cheaper capacity in the last four years, with the government projecting that 9% of annual electricity would be from renewables by 2030, which researchers say is too little. In 2010, just 1% of energy was from renewables, and almost all of it hydro.

It is also set to buy up to eight new fixed-cost nuclear plants from Russia, which would cost an estimated $84 billion (in addition to attendant concerns over waste management) as it looks to add 9,600 MW of nuclear power to its creaking grid.

A new study by Stellenbosch University released last week found that renewable energy in the country would be cheaper by at least half than nuclear.

Djibouti has boiling water underneath deserts

The unlikely country of just 850,000 people currently depends on Ethiopia for 65% of its electricity needs, but has set its sights on becoming completely reliant on renewable energy by 2020.

The country has been on infrastructure expansion drive and needs cheaper power to attract investment and create more jobs for an economy dependent on services based on its strategic location at the entrance of the Red Sea, and which puts it almost at the centre of the world’s energy transport trade.

Its Vision 2035 growth plan foresees it as the largest logistics hub in Africa but needs more than the 173 MW of power—75% produced by diesel— it currently produces. It has identified 13 potential geothermal sites and will next year drill four wells to size up capacity.

Boiling water underneath its desert landscape was first detected in 1970 but the lack of technology hindered exploitation, in addition to a civil war and the effects of the global financial crisis on western partners.

This has since changed—it is now a one-party dominant state while investors have been lining up to take a punt.

Solar and wind projects are also in the pipeline, with renewables the only viable source of energy for its grid, according to the International Renewable Energy Agency.

In addition, given its lower targets relative to the size of its (highly-urbanised) population and market, possibilities of economies of scale are deep, suggesting the country could very well become Africa’s first green “superpower”.