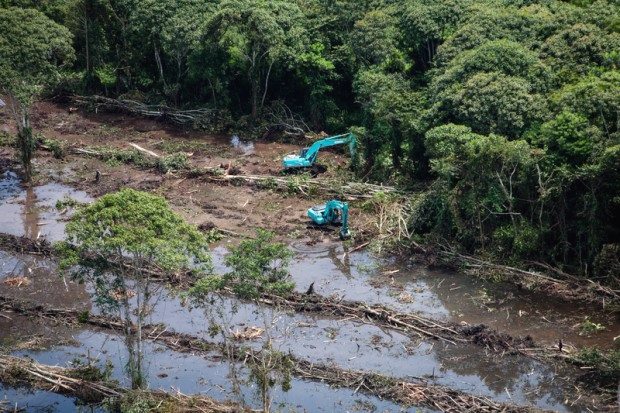 Bumitama, the company behind these bulldozers, received loans from HSBC despite breaching the bank’s policies.

Over three weeks ago, we exposed how HSBC is funding palm oil companies that are tearing up Indonesia’s forests. Since then, thousands of emails have been sent to the CEO. Now HSBC is responding to those emails, but what it’s saying is at times misguided, and other times just plain wrong.

More than 200,000 people across the world – including many HSBC customers – have demanded that HSBC only provides loans and other financial services to companies that protect forests, including over 30,000 people in the UK who have sent emails directly to Stuart Gulliver, HSBC’s CEO.

HSBC has up until now been pretty quiet. But now, everyone who has emailed the bank to complain about its role in funding deforestation is receiving the same response. At face value, it looks reassuring but dig a little deeper and there are plenty of holes and unanswered questions. Let’s take a look at what HSBC has said…

We share your concerns, and those of Greenpeace, many other NGOs and local communities about ongoing deforestation in Indonesia.

Excellent news! We all agree that ongoing deforestation in Indonesia is a cause for concern.

The palm oil industry is highly complex, with a large number of companies involved in growing, refining, transporting and using palm oil, which is a valuable export commodity as well as an important food for a large number of people across Asia.

A significant problem and nothing new

The palm oil industry is indeed highly complex. That’s why every company involved in the industry – including banks – needs to make clear it will not do business with palm oil companies that destroy rainforests. Companies like HSBC also need be transparent about who they deal with and what they’re doing to make sure their policies are being enforced properly. Otherwise it becomes very easy for destructive companies to hide what they’re doing.

Clearance of rainforest, and the maltreatment of local people, has been a significant problem for many years, which is why we introduced our first forest policy in 2004 to limit our exposure to the unsustainable use of forest land.

It’s a good thing that HSBC have recognised that strong policies are needed to protect rainforests. Sadly, HSBC’s policies are not strong – and it doesn’t seem to be enforcing them. Our investigation has shown that HSBC lent millions to companies that don’t comply with its current policies.

During 2014 we revised our policy, consulting with a number of NGOs, including Greenpeace, on the standards we should use to guide our involvement with the palm oil sector.

We did give feedback on HSBC’s draft policy in 2014. HSBC chose to ignore most of our feedback (such as refusing to rule out financing companies that destroy Indonesia’s carbon-rich peatlands). HSBC’s failure to follow our advice and adopt a strong policy three years ago is why we’re campaigning now for HSBC’s policies to be improved.

These are laid out in our Agricultural Commodities policy, and required our palm oil customers to be a member of the Roundtable on Sustainable Palm Oil [RSPO] certification scheme, and also to have one of their operations certified by December 2014. We made it clear that if our customers did not achieve these requirements we would no longer do any business with them. As a result we decided to stop banking 104 customers in the palm oil sector.

104 customers sounds like a lot, but we don’t know who they are or which palm oil companies HSBC still has as customers. HSBC needs to come clean about which companies it is funding and what it is doing to ensure they are protecting rainforests. Until that happens, HSBC is asking us to trust it without showing us any proof.

We also set a deadline that we would require all our palm oil customers to have 100% of the operations certified by the RSPO by the end of 2018.

The RSPO’s standards are utterly weak and do not prohibit deforestation. Many RSPO members routinely breach these standards with little fear of sanctions. So relying on the RSPO for your palm oil standards is not a great start. Other companies, such as Nestle and Unilever, have much stronger standards. HSBC needs to catch up with these companies and adopt a tough ‘no deforestation’ policy.

Although for many companies this is a challenging deadline, we have been pleased that through high level engagement with company management a growing number of palm oil companies is working towards achieving our target.

Five of the six palm oil companies mentioned in our report have said they will not meet HSBC’s 2018 deadline. The other is not even a member of RSPO (breaking HSBC’s own policy on palm oil funding). How many other HSBC customers are also going to miss this deadline?

This is good news for the forests and the people that live near or work in them, as RSPO certification prevents deforestation and requires fair treatment of local people and the workforce. We believe that this is an example of HSBC making a positive contribution to society.

This is nonsense. RSPO certification does not prevent deforestation or mean that a company is giving local people and its employees a fair deal. RSPO members – including many of HSBC’s customers have been caught destroying forests, draining peatlands and using forced or child labour.

The alternative would be to withdraw from the palm oil sector, thereby losing influence and the ability to encourage better practices.

We have discussed this option with Greenpeace and they agree with us that it is better to stay engaged with the leaders in the palm oil sector, which have achieved RSPO certification, than to walk away.

Yes, HSBC should continue to finance responsible palm oil companies. To do that, it needs to toughen up its policies and work with its customers to make sure they comply. It also needs to be open about how it goes about this so everyone can be confident HSBC is doing what it claims to be doing. And it bears repeating that RSPO certification is not a guarantee of sustainability.

Turning to the specifics of the Greenpeace report, I would like to draw your attention to the dates of the loans which they list, many of which pre-date our 2014 policy.

Where our report covered loans made before 2014, the companies in question were still not complying with HSBC’s previous policies, released in 2008.

HSBC claims it is legally obliged to maintain customer confidentiality to the extent that it will neither confirm or deny the identity of its customers. It has pointed us to English laws that are designed to prevent banks from disclosing details of its customers account (e.g. it can’t tell anyone if you go overdrawn). It is not clear why HSBC thinks this prohibits it confirming or denying loans to palm oil companies (especially as these are often already in the public domain), let alone saying that a company was not (or was no longer) a customer.

Even the laws HSBC quotes have exceptions. For instance, a bank can reveal information if it is in their interest to do so or if it has the customer’s consent. It can also reveal confidential information if coming clean is in the public interest. I think it is most definitely in the public interest for HSBC to explain which palm oil companies it banks and how it is working with them to end deforestation.

… but having reviewed the report in detail, we are not aware of any current instances where customers are alleged to be operating outside our policy and where we have not taken, or are not taking, appropriate action.

If HSBC didn’t know that some its customers were operating outside of its policy then it wasn’t paying very much attention. It’s not nearly enough for a bank to say ‘trust us’, particularly when we have hard evidence of its policies not being implemented. Because we don’t know all of the palm oil companies that are HSBC customers, we have no way of knowing how many are operating outside their policies. Because we do not know what action HSBC has taken and which companies are involved, it’s impossible to say whether this is accurate or not.

I hope you have found this explanation of our approach to the palm oil sector useful. HSBC has no interest in financing customers involved in: illegal operations; land clearance by burning; the conversion of high conservation value areas; harmful or exploitative child labour or forced labour; the violation of the rights of local communities, such as the principle of free prior and informed consent; and operations where there is significant social conflict.

These are the prohibited business activities HSBC says it won’t fund, and are listed in its Agricultural Commodities policy. Our investigations showed that each of these policies has been breached by one or more HSBC customers in the past five years. If HSBC says otherwise, it needs to produce some evidence.

From this, it seems like HSBC still has a long way to go before it understands how far it’s lagging behind many other companies involved in palm oil – we’re not going to give up until it does. And if you’d like to send HSBC’s boss an email asking some difficult questions, you’re more than welcome.