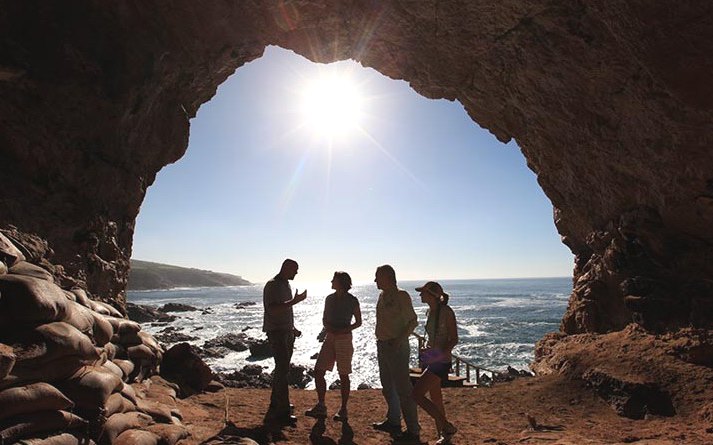 I prefer to call this group the ‘Mossel Bay people / Modern Human Origins,’ being more appropriate, as ‘mossels’ and shellfish are of great significance in what follows. In order to fully appreciate and understand the significance of the Mossel Bay people, the background has to be given.

It is well documented that many anthropologists and scientist adamantly believe that Africa is the Cradle of Humankind, the origin of human life as we know it, where it all started. These early homo sapiens required tools and implements with which to hunt, cook, build and live. They constructed these tools out of stone, bone and wood. The remnants of these have provided much insight into the types of materials that were available during that early time, what they ate and how they lived. These all bear testimony to their way of life and level of advancement.

The so called Recent Single-Origin Hypothesis also placed the development of mankind as originating from one central point. Furthermore, DNA evidence added to this popular theory that all mankind on earth originated, at some time in human history, from Africa. 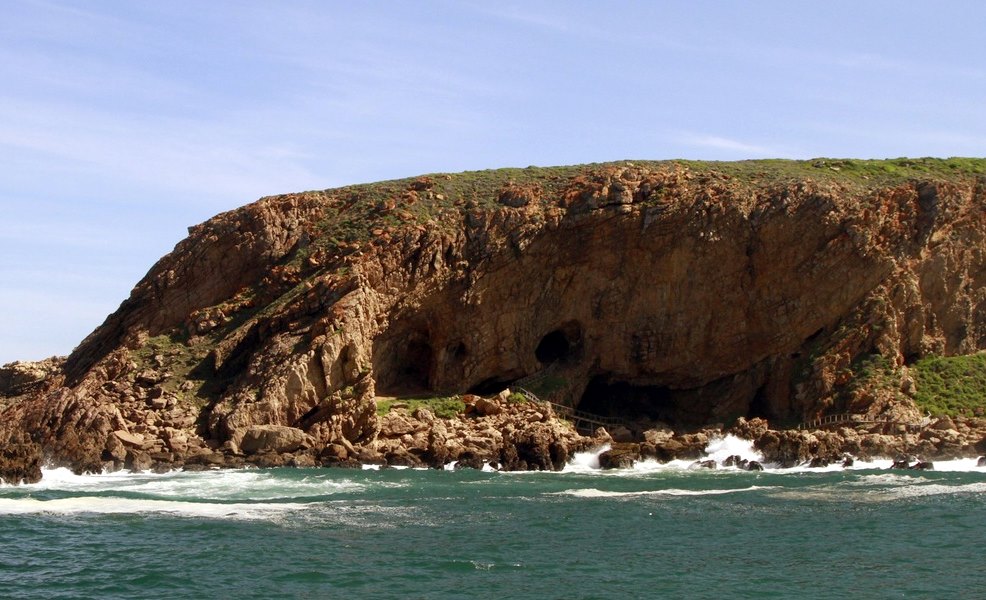 Excavations done over the last few years at Blombos Cave, Stilbaai, by prof. Chris Henshilwood of the Universities of Witwatersrand and Bergen in Norway, indicated that humans lived and occupied the area 75,000 years ago. Pieces of ochre engraved with abstract designs, beads made from Nassarius shells, bone tools indicating evidence of shell fishing, bladelet stone tools and a large number of small flakes indicating on-site production.

It is also well recorded that nowhere in the rest of the world, Europe, Asia, the America’s etc, any evidence of modern thinking man could be found prior to 45,000 – 50,000 years ago.

The findings at Blombos Cave, Stilbaai, indicating shell fishing is of great importance. Research shows, and it is referred to as the “miracle health discovery of the 21st century,” that the Omega and Omega 3 benefits from fish oils and shellfish, known as brain food, contributes to intelligence and growth of the brain. This will be referred to again later. 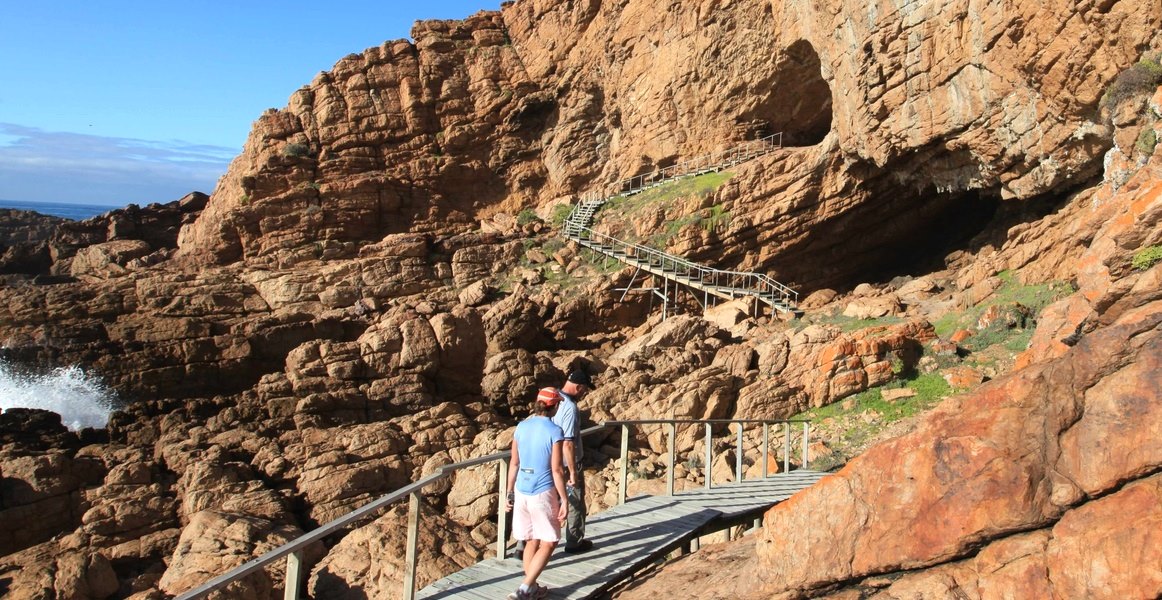 It is also an accepted fact that the bio-behavioural adaptations of modern hunter gatherers are intimately tied to climate and environment. They went where it was the easiest to live.

We know of the ice age between 200,000 and 170,000 years ago, which meant that Africa then was a desert and totally uninhabitable. Because of the thickness of the ice in Europe and Poles, the sea level was much lower. Similarly, it is well known that Mossel Bay has the second mildest climate in the world, only a 15 degree difference between maximum high and maximum low, hosts together with the coastline to Cape Town, the greatest biodiversity / amount of plant species (10 – 30 times more than anywhere else in the world), and is situated at the Southern most tip of Africa.

Excavations of a series of caves at Pinnacle Point since the year 2000 have revealed occupation by middle Stone Age people between 170,000 and 70,000 years ago, where the earliest evidence of the systematic exploitation of marine resources (shell fish), symbolic behaviour, evidence of heat treatment of rock to make stone tools and the use of ochre to beautify, have been documented. 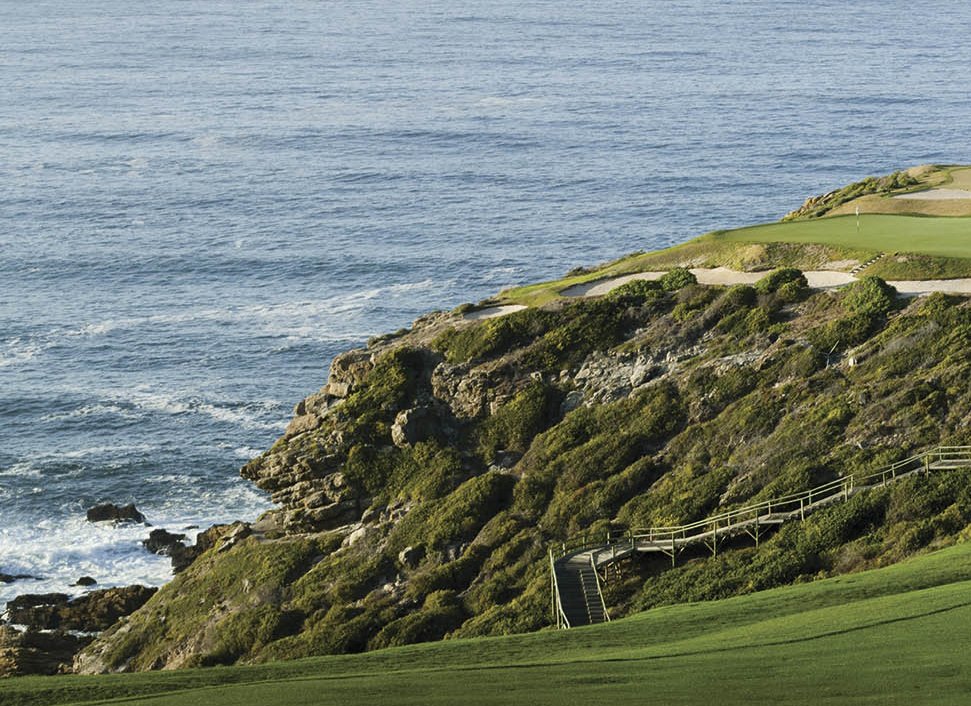 This discovery has been made by an international team, headed by prof. Curtis Marean from the Institute of Human Origins of the Arizona State University as well as researchers from South Africa (UCT), Australia (UNSW, UoW), Israel and France.

Bear in mind that the whole world was in a fluctuating but predominantly glacial stage, the whole of Africa was substantially colder, drier and largely uninhabitable. So too the coastline was much lower. Most archaeological sites of the time period 160,000 – 70,000 would be under water, if they were far out on the Agulhas bank.

In comes the shellfish and fish for humans

The excavations further indicate that these early humans expanded their diet to include marine resources such as shellfish and fish.

It is believed that between 400 and 700 of these early modern thinking men and women, survived the ice age here in Mossel Bay and coastline to the West, which was habitable due to the known mild climate, by eating roots, seeds, etc. of the very hardy, diverse plant species and then shell fish as protein.  Shell fish is believed to may have been crucial to the survival of these early humans as they roamed the coastline of Mossel Bay. 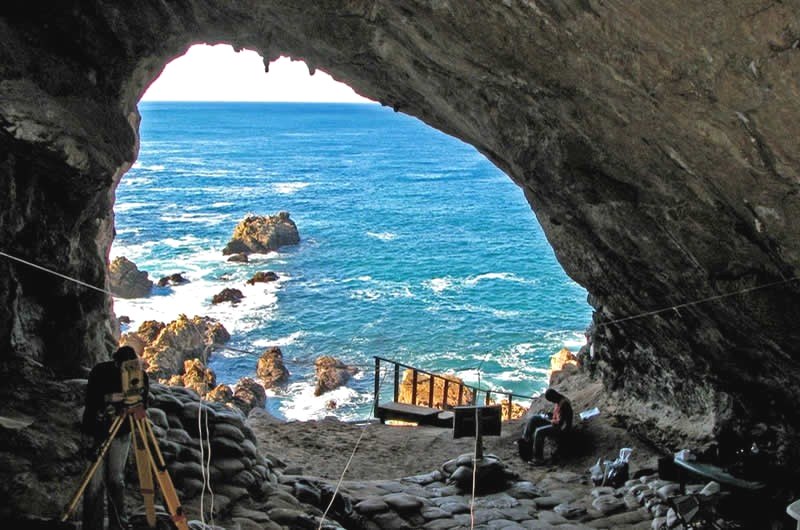 Harsh climate conditions nearly extinguished our species, but these Mossel Bay men and women survived, by exploiting the unique combination of resources on offer along our coast. Their predominantly shellfish protein diet, rich in Omega, played a substantial role in enlarging their brains and intelligence.

They, as origin of modern humans, moved up the coast of Africa and multiplied. The climate then changed, earth heated, rains returned, and then +- 45,000 years ago, these men and women, who originated and survived in Mossel Bay, walked into Europe, Asia, through the Bering Straits into the Americas and further.

Prof. Marean and his team’s discovery is of great significance to Mossel Bay, as it now provides a most unique, much-needed niche market tourist attraction. Mossel Bay’s economy relies heavily on a strong influx of tourists and a large percentage of the ratepayers generate their income from tourism. The challenge is now to develop and market this, arguably greatest tourism attraction of all time!