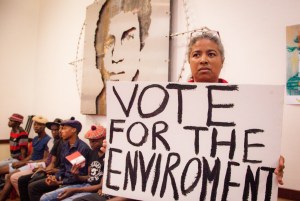 Preliminary Election 2019 results show that the African National Congress (ANC) has maintained its position as the country’s governing party despite the party’s lack of focus on the critical issues of our time – namely climate change and environmental degradation – in their manifesto. According to an environmental and social justice coalition, the ‘new’ government has the unique opportunity – through innovative new policies and industries – to shift the country away from polluting fossil fuels, nuclear and a carbon-intensive development model, towards a clean and just energy future driven by renewables.

The coalition calls on the new legislature to be responsive to the growing public demand for stronger climate action and environmental justice, and trusts that the country’s newly elected representatives will demonstrate leadership in that regard.

Bishop Geoff Davies, Founder and Patron of the Southern African Faith Communities’ Environment Institute (SAFCEI) says, “Unfortunately, the environment and climate change has not featured on any political party’s agenda for this election. There seems to be some promise at provincial level, but it is clear that the benefits of transitioning to renewable energy – such as the obvious decreased carbon emissions, an increase in job and business opportunities and improved and more equitable access to energy – is not evident on a national level. And yet, by developing our renewable energy industry, the government would inevitably be addressing many of the issues that are current priorities, such as growing inequality, poverty, unemployment and homelessness.”

Climate Justice Campaigner at 350 Africa South Africa, Alex Lenferna says, “The ANC’s head of economic transformation Enoch Godongwana released a statement a few days ago about the government’s intention to force banks to invest in more coal, undermining all the ANC’s intentions to go renewable. With the ANC set to hold onto power, South Africans must be vigilant and hold them to their manifesto’s promise of renewal and a just transition away from fossil fuels.”

“Under 25 years of ANC leadership, we are now ranked as one of the worst countries in the world in terms of action on climate change and progress to a sustainable and secure energy system. The ANC promised to change course and with elections over, it is up to citizens and civil society to ensure their electoral promises turn into ambitious action on climate change and a just transition to an affordable 100% renewable energy future for all,” adds Lenferna.

Noelle Garcin from Action 24 – a European Union co-funded, collaborative initiative – says, “We urge the 6th legislature to make climate change and environmental sustainability a priority within our developmental agenda, and treat it with the urgency and ambition it demands. The political parties that win the most seats in Parliament and in the provinces have a big responsibility in that regard. But the ones who get fewer seats can also play a critical role, by using their voice to champion environmental and climate issues across the board, particularly through active involvement in portfolio committees.”

“Citizens should also remember that elections are not everything, and hold their representatives to account on their electoral promises in the course of the next five years. A healthy democracy requires active and constructive participation in governance. Legislatures and our elected representatives must create the conditions for meaningful public involvement, particularly on issues that concern us all, such as climate change,” adds Garcin.

According to Vainola Makan, SAFCEI’s Energy Justice Coordinator, “If the integrity of the elections is ruled intact by the Independent Electoral Commission (IEC) tomorrow, then it appears the country’s status quo is confirmed. The ANC remains the national governing party, and has gained back Gauteng, while the Democratic Alliance (DA) continues to hold the Western Cape. These are two parties that do not hesitate to champion fossil fuels – including fracking – as plausible energy sources and both are known to ignore public concerns when projects present devastating consequences for the environment and their health and wellbeing.”

“One of our government’s main goals now should be to progress the Integrated Resource Plan (IRP), without delay. The IRP should provide the blueprint for a smooth transition away from these harmful and outdated energy options – including nuclear – to more sustainable solutions. Furthermore, to ensure a just energy transition that benefits all South Africans, there should be sufficient consultation between the country’s labour force (particularly the mining sector), society at large, industry and government,” adds Makan.

Thembeka Majali from AIDC-One Million Climate Jobs Campaign highlights Eskom’s role in the just energy transition required: “As a public utility, Eskom should be serving the energy needs of our people and a core aspect of its role should be focused towards advancing renewable energy. To ensure a fair and just energy transition to a low carbon economy in South Africa, Eskom should replace internal coal jobs with internal renewable energy jobs. These need to be decent and permanent jobs and would require re-skilling and re-training of the workers.”

Lorna Fuller, Director of Project 90 by 2030 says, “The country must transition to renewable energy, if we have any hope of reducing our carbon emissions by two-thirds by 2030. We need a government that recognises the reality of the situation and is prepared to take decisive action.”

The coalition – which includes the above-mentioned organisations and the Environmental Monitoring Group (EMG) – says, “We resolve to continue monitoring the governing parties and how they respond to the threat of climate change and a degrading environment. Politicians need to be held accountable concerning the environmental component of their manifestos. We will engage with the ruling parties after 100 days to assess how far they have come with these promises and to what extent they are addressing the dire consequences of climate change and attempting to create a just energy future for all South Africans.”