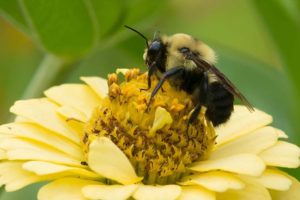 Monsanto, the genetically modified food giant, has recently purchased Beeologics, a leading bee research firm. Borrowing a move from the tobacco companies’ playbook, Monsanto appears to have decided that if you do not like the scientific reports coming out about you, then you should just buy the labs.

In making this purchase, Monsanto now has control of research that has previously pointed at its pesticides for contributing to – if not outright causing – a sharp decline in bee populations. Multiple studies in recent years have linked pesticides and high fructose corn syrup with colony collapse disorder.

With Monsanto’s vested interest in bee research’s conclusions, there is reason to believe that the true causes of and solutions for these bee epidemics may be manipulated if not lost entirely. Indeed, it seems likely that now some new study released by Beeologics will find that GMOs are not the problem after all.

Prior to the acquisition, the U.S. Department of Agriculture looked to Beeologics as its top resource for bee research. In effect, Monsanto has now positioned itself even better with the USDA. For that reason, health experts and entomologists alike are upset that Beeologics would be willing to sell itself to Monsanto in the first place. Alas, sometimes it is more about the money than the honey.

Will own new research tools

Another motivation for Monsanto to take over the research company is to acquire the Remebee technology that Beeologics had been developing. In a statement, Monsanto said, “[We] will use the base technology from Beeologics as a part of its continuing discovery and development pipeline. Biological products will continue to play an increasingly important role in supporting the sustainability of many agricultural systems.” Evidently, the way to solve problems caused by chemicals is by using more chemicals.

Still, Monsanto insists it will use Beeologic’s research to improve the world.

“We’re absolutely committed to Beeologics’ existing work,” said Monsanto spokesperson Kelly Powers. From an optimistic perspective, one could take Monsanto at its word and hope that a corporation that is causing the bee problem would then use information it has purchased to help fix the situation.

Given Monsanto’s track record, however, many are definitely adopting a more pessimistic perspective, assuming that Monsanto will find a way to profit off whatever it deems the solution to the bee crisis with some exclusive product or perhaps just cover it up entirely. After the Natural Society named Monsanto the “Worst Company of 2011” for a myriad of reasons, here’s hoping that other bee research organizations keep buzzing toward a true identification of the threats posed to bees.